It was 12 long years between the first and second generation Nissan Titan. It only took another three for them to deliver the third generation, but based on the automaker’s position in the light-duty truck market, it would not be accurate to call them a “short” three years.

But the Titan team isn’t giving up. They’re changing the approach a bit—in August we learned the next Titan XD will not have what was in 2016 a blockbuster feature in a Cummins Diesel engine. The design team, including designers who worked on the original 2004 Titan, also came up with a new look for the 2020 Titan trucks, one that they say is meant to convey power and all the technology the truck packs.

I’m not sure what it conveys, but it does look slightly better.

Read on or check out the video below to dig into all the details.

Every 2020 Titan, regardless of trim will be powered by a 5.6-liter Endurance V8 gasoline engine delivering 400 horsepower and 413 lb-ft of torque.

There is no other engine option and, as we stated earlier, the Cummins is no longer an option on the coming XD. Given that the XD’s whole thing is that it blurs the line between light- and heavy-duty trucks, you’d imagine we’ll see some kind of powertrain difference between the 2020 Titan and Titan XD, but as of right now, there’s only one: this new 5.6L Endurance V8 mated to a new 9-speed automatic transmission.

The new gearbox features a larger final gear ratio of 3.692:1, which Nissan says provides more torque at the wheels in a given gear and delivers smoother and faster acceleration.

The Titan will again be available in 4×2 and 4×4 configurations. The 4×4 models have a transfer case. Available off-road features include hill start assist, brake limited-slip differential and an electronic locking rear differential. Hill Descent Control will be available as well, but only on the PRO-4X trim. A new Off Road Gauge displays the vehicles tire angle, relative pitch and roll angles.

The new design of the Titan is anchored by the refreshed look of the front end, dominated by a new interlocking frame grille and surround.

The grille is flanked by large LED headlights and LED daytime running lights. The new headlights are around 120 percent brighter than those found on the current Titan, Nissan says. These and the daytime running lights are standard on the PRO-4X, SL and Platinum Reserve. Available LED fog lights add another 15 degrees of visibility on each side of the front end, Nissan says.

Nissan also added LED lighting in the pickup bed. The rear end of the truck has a slightly new look and features LED lights and tailgate finishers.

More than anything, I’d call this redesign a refinement of the previous generation. It’s improved in almost every way. It fits in better with the rest of Nissan’s design language but it also looks more like an American pickup truck. The lines are sharper. The front end has a more confident look. It might not convert any Ford or GM fans, but it stands up well to the latest Toyota Tundra even if it’s not as handsome as the new Ram trucks.

Another point of differentiation for the crew cab is a dual panel, panoramic moonroof that Nissan says is one of the largest in the segment at 3 feet square.

Inside the cab, a 7-inch driver information display is standard. An 8-inch center display is also standard, but a 9-inch high-resolution touchscreen display in the center stack is an available option. The Titan also features a flexible smartphone holder/charging system, 12-speaker Fender audio system, and Apple CarPlay and Android Auto connectivity, standard. An integrated Wi-Fi router is also available, capable of hosting up to six devices with speeds up to 45 mbps.

But the headlining technology in these new trucks is the standard inclusion of Nissan’s Safety Shield, a a suite of driver-assist systems:

Another welcome upgrade is the eight airbags found on the 2020 Titan versus the six on the current generation. 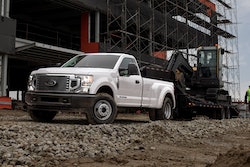 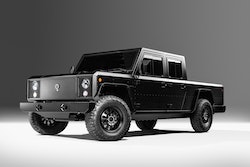 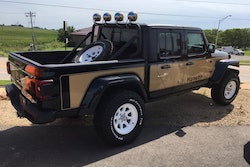