Tom Quimby
Jun 29, 2022
A screenshot from a video Ford CEO Jim Farley posted on Twitter showing the new Raptor R making a dramatic entrance at a recent Bronco R event. Farley credited Twitter users for helping to guide the company's decision to equip its latest super truck with a V8. The highly anticipated super truck will be revealed July 18.
Ford

Not sure if Ford will be adding that classic snub to its marketing lexicon but you can't help but think they might be considering it following a recent surprise Raptor R visit that left journalists staring at a huge cloud of dust.

"An F-150 Raptor R came storming through the desert past the assembled journalists, but not closely enough for them to get a good look," writes Gastelu who went on to say that the sound of the truck's V8 "could not be missed."

Ford CEO Jim Farley tweeted a brief video that shows reporters parked in a lineup of Bronco R's as the Raptor R blasts into view and does a monster slide and donut before roaring out of view (see video below). Beyond this memorable tease comes the full reveal on July 18.

Ford's marketing folks definitely get a big thumbs up for pulling off such a surprising and dramatic entrance. Doubtless, the buzz would have been even bigger if the truck jumped over the current Raptor while AC/DC's classic "For Those About to Rock" jammed inside those Bronco Rs. Yeah...that would have been the best OEM event ever, even besting the helicopter drop of Chevy's 2019 Silverado Z71 Trail Boss reveal nearly five years back at the Texas Motor Speedway.

Though Ford's not talking numbers yet, everyone knows that they need to best Ram's amazing 702-horsepower TRX. Motorheads were thrilled when Ford rolled out its 7.3-liter Godzilla V8 a few years ago. The big block can be spec'd in Ford's Super Duty trucks and is available as a crate engine for "those about to rock," since as Hot Rod magazine put it, the engine "packs monster potential."

But arguably there's been more fingers pointing toward Ford's other V8s, namely their 5.0- and 5.2-liter. Those engines would cut weight over the TRX's hefty supercharged 6.2-liter. I'm not so sure though that either the 5.0 or 5.2 would prove all that helpful in reducing the lawn dart effect, that is the tendency of a front-heavy truck to want to nose-dive when airborne.

Power opportunities with either the 5.0 or 5.2 look promising. Hennessey was able to squeeze 758 horses out of its 5.0-liter V8 Velociraptor, which gives it a 56-horsepower advantage over the TRX.

Of course, though they're a little late to the super truck segment, you have to wonder what Chevy has in store. The big reveal of the Silverado ZR2 Bison will take place this summer. Car & Driver reported that the "Silverado ZR2's 420-hp 6.2-liter V-8, spool-valve dampers, knobby 33-inch all-terrain tires, and electronic locking front and rear diffs should go untouched."

Right off the bat, in terms of power, that would put the Silverado Bison behind the TRX and the Raptor, so I'm not so sure I'm buying into the notion of a 420-horsepower V8. Regardless, what an impressive and historic time for pickups. More power and features keep coming. The downside though is historic inflation, which includes crazy high fuel prices like a never-before-seen national average of over $5 a gallon for regular.

Yes, surging fuel costs make all-electric pickups look more attractive, and with their head-snapping instant torque, it may not be long before they snatch those "eat my dust" trophies away from their ICE counterparts. But getting airborne in an EV? While it won't be as front heavy and thus as prone to lawn-dart landings, I just don't like the idea of catching air with a lithium-ion battery pack that, if cracked, can turn into a monstrous torch. I'd rather wait for nonflammable and more powerful solid-state packs. That will obviously take some time, but there's no doubt that they're coming. 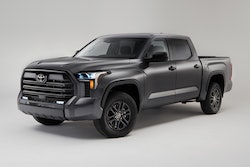 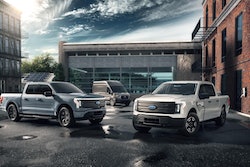