Though Ford and Chevy enjoyed a brief shouting match over who could rightfully lay claim to the top Class 3 towing capacity among heavy-duty pickups, Ram went ahead and settled it for them with the announcement that the 2021 3500 HD would take that crown, thank you very much.

Though the Ram HD lineup remains largely unchanged for 2021, the truck maker was able to squeeze a bit more torque out of its 400-hp High Output Cummins turbodiesel while adding a healthy 2,000 pounds of towing capacity to its largest pickup.

Ram says it worked with Cummins to implement higher limits for boost from the variable geometry turbocharger on the High Output configuration of the 6.7-liter, six-cylinder diesel in the 3500. That plus an increase in flow rate in the fuel delivery system unlocked an additional 75 lb-ft of torque from the engine to bring total torque out put to 1,075 lb-ft—another best-in-class spec.

(As an aside, Ram’s late announcement that it had eked out 100 pounds more in towing capacity and just 25 lb-ft more torque than Ford’s numbers likely set some hair on fire at Ford HQ.)

But obviously that slight torque boost isn’t the reason Ram was able to bump up max towing by 2,000 pounds.. Instead, the 6% increase was made possible by two improvements.

The rear portion of the new frame design on Ram’s HD pickups includes fully boxed rails and a rear-axle structural crossmember that handles the burden of fifth-wheel and gooseneck towing. That crossmember has been upgraded and strengthened. That improvement in tandem with the improved hitch design are responsible for the boost in towing capability, Ram says.

Also new on the 2021 Ram HD trucks is a digital rearview mirror. This ‘mirror’ is really a 9.2-inch display that shows a real-time video feed from a rear-facing camera. But, a cool aspect of this is that if you’re not a fan of the camera feed, the camera can be turned off and the screen reverts back to a traditional reflective mirror.

The interior of the Ram HD trucks features a huge 258 liters of storage volume on the Mega Cab Ram 2500 and 3500, including two bins behind the rear seats and a center console with 12 different storage combinations and 22.6 liters of storage capacity.

The center console features a three-position sliding cup-holder tray that can be stowed under the center armrest to reveal a deep storage tub that can hold a 15-inch laptop.

2021 also marks the introduction for Ram’s new Limited Night Edition. This is essentially a black appearance package for Ram’s top-of-the-line luxury pickup. The HD version starts at $64,625 and includes: 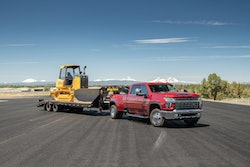 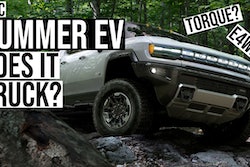 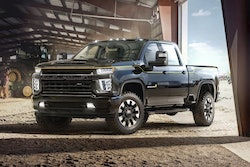