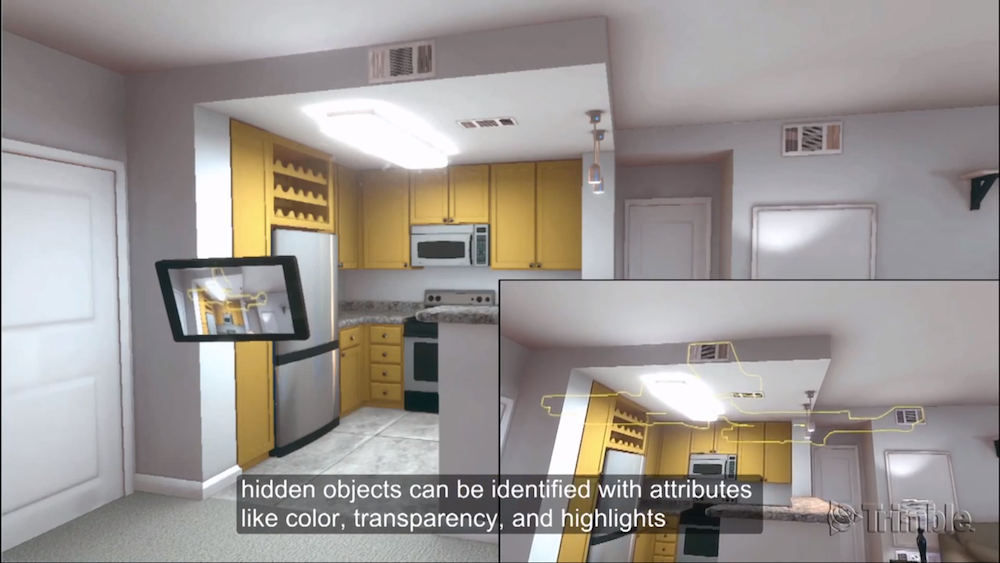 A demo of Trimble’s Through the Wall app shows the app revealing wiring by just pointing the tablet at the ceiling.

Glass is by far the most well-known hardware project still in development at Google. But it’s another project that likely has more opportunity for meaningful impact on the construction industry: Project Tango.

Seeing that opportunity, the software teams at Trimble are already hard at work developing apps for Tango with pretty exciting capabilities.

Using a combination of sensors and cameras, Tango allows Android smartphones and tablets to track their movements in 3D space while creating a map of their surroundings at the same time. According to Google’s Project Tango page, “These sensors allow the device to make over a quarter million 3D measurements every second, updating its position and orientation in real-time, combining that data into a single 3D model of the space around you.”

Using that technology, Trimble has created an app called SketchUp Scan and another called Through the Wall.

SketchUp Scan allows users to create a 3D model of a single room or an entire floor that can be edited and then shared through email or social networks. It can also be uploaded to Trimble’s 3D Warehouse program directly from the Tango device.

“Having the ability to edit the 3D model of the space right after the image capture enables users to add features—from windows and doors, to furniture, office equipment or nearly anything else—using millions of 3D models available in the 3D Warehouse,” Omar-Pierre Soubra, director of Collaboration at Trimble, said in a prepared statement.

And while SketchUp Scan creates models for using later, Through the Wall, is an augmented reality app that gives users real time information they can act on while using it. The app uses data from Computer-Aided Design (CAD) or 3D Building Information Modeling (BIM) software to overlay pipes, electrical wires and HVAC infrastructure on top of an image of a wall. So, using a tablet or smartphone, a user could hold the device up and see the position of those things on the screen.

Since Tango is still deep in development at Google, Trimble’s apps are more proof of concept, so it’s unclear if we’ll actually to see these apps come to market. It’s still an exiting look at what this mapping technology holds for contractors, engineers and contractors.

Maybe more exciting is the possibility of combining apps like these with a wearable device like Glass. Perhaps in the next 10 years, you’ll be able to don a pair of safety glasses that allow you to map and see through the walls of a room with all of that data projected directly into the lens of those glasses.