As thousands of attendees milled about Caterpillar’s cavernous exhibit at the big Bauma trade show in Munich this week, a small red and black contraption hung quietly above the masses as they weaved between the hundred or so yellow machines on display.

It’s a sight that in less than a few years’ time will be the norm. Cat expects drones like the Redbird quadcopter suspended by wires at its exhibit to become integral in providing owners, fleet managers and operators with more actionable data in the quest of reducing cost per ton.

In fact, the company is likely not long away from launching its own drone service through Cat dealers that will let customers tap into such data with drones of their own or through recurring visits from contracted drone pilots.

Caterpillar announced its partnership with Redbird, a French drone data analytics startup, earlier this year. At the time, the company provided few details about the collaboration other than saying it was interested in beginning tests in Europe (where drones fly freely due to a lack of regulations) to see how these aircraft could advance the company’s push over the past 18 months to provide customers with more and more data.

But at the Bauma show, Cat gathered customers and dealers around a giant display made up of eight large touchscreens in order to guide them through exactly how Redbird drones can already greatly enrich VisionLink telematics data.

Melanie Venneker of Cat’s German dealer Zeppelin took me through the pitch she had given hundreds of others at the booth. Using the touchscreen, she pulled up an image of a drone and initiated a simulated flight path over a quarry. In just 20 minutes a Redbird quadcopter can map about 30 acres of quarry, providing more common data like material volumes, but also data more pertinent for fleet managers like road grades and widths.

Inside Redbird’s app for viewing this mapping data, Cardinal, users can view 2D and 3D maps that are as easy to read and navigate as Google Maps—and from a desktop or iPad.

During our demonstration, the map of the quarry was marked by the software with red lines along roads with steep grades while green and orange borders around those roads indicated, respectively, whether two trucks could pass side by side along the road or when the width only provided for one truck at a time.

Cardinal pulls in a wealth of data from VisionLink, providing a realtime view of machine location, idle time and more atop the 3D maps being captured by Redbird drones on a weekly or monthly basis.

This opens up a whole new level of fleet management possibilities.

With the machine data and the map users can actually track speed, fuel consumption and other metrics at exact locations and grades at a given quarry or jobsite. With that type of data it’s possible, for instance, to discover a machine is losing a particular amount of fuel because the grade of a road in the quarry is about 8 percent too high. With that knowledge, modifications could be made to the road’s architecture and a lot of money saved.

The combination of data and mapping can also be used to set up geofences on quarries and jobsites that prevent machines from leaving certain areas while also allowing users to compare production in those areas against the same machine type in other areas of the site.

In addition to offering much quicker turnaround than traditional aerial photography, Redbird mapping offers much more scalability and at a fraction of the cost.

And when it comes to cost, a Redbird representaive at Bauma said they and Cat are planning to offer this VisionLink integration both as a service and through sales of the actual drones themselves. Contractors who purchase the data as a service can expect a cost of between $400 and $500 per flight with data delivered the next day by a contracted drone pilot in your area.

And beyond the production data discussed earlier, Redbird’s mapping allows for the extraction of cut profiles and the ability to export maps to Autocad.

As for when you can expect to drop into your local Cat dealer and employ a drone partner for your own yellow iron, though no exact date has been set, U.S. customers can likely expect to hear something a bit more official about the launch of the service before the end of the year, according to the Redbird rep. 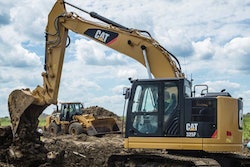 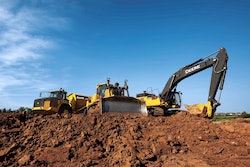 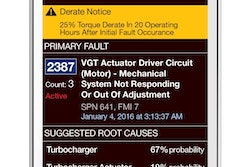