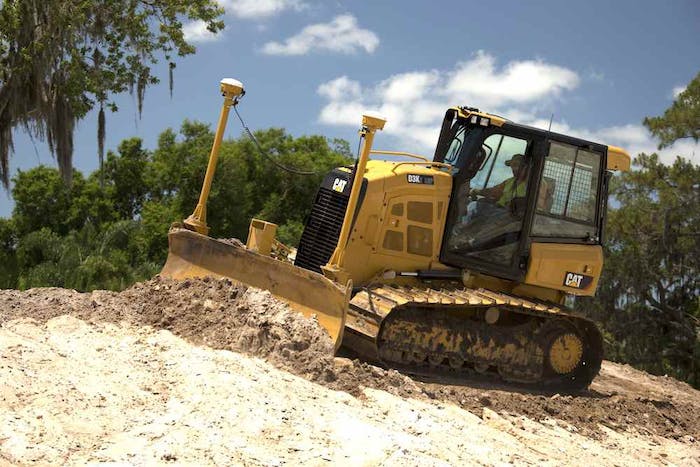 A theme I hear from contractors these days is that more than ever, they are using dozers to do finish grade passes.

Motor graders can do this too, but a motor grader is a one-job machine. A dozer can also hog out mountains of dirt, pile up brush and material, push out stumps, cut slot trenches and rip. So when it comes to utilization, the dozer wins hands down. The limitations that keep contractors from using them for finish work more frequently are human and two-fold:

1. It takes a lot of stick time before you get competent with a dozer.

2. Experienced dozer operators are rare and in high demand.

Machine control technology, using digital topo maps and GPS-guided blade control is one solution, but comes with a heavy price tag. Setting up a machine can cost anywhere from $60,000 to $80,000, hence adoption rates have remained stuck in the single digits.

Activating the slope assist is as easy as pressing the yellow button on the joystick. All you have to do after that is steer and control your blade elevation.

Caterpillar offers all the aforementioned GPS bells and whistles. But the company also recognized several years ago the hesitancy of many contractors to buy into a full-blown GPS system.

So Cat engineers have been working on a suite of low-tech enhancements to their smaller dozers that give you much of the control and precision of GPS without the hit to your pocketbook. The full set up just adds $6,500 to the cost of the dozer. The machines with this technology come with the K2 badge.

The company unveiled a lot of this at the World of Concrete in February. And earlier this month we had a chance to try out one of these dozers, the D5K2 at the new Athens, Georgia, factory where they are being made.

But before we get into our test drive, let’s take a more detailed look at the technology behind the K2 series system.

When an inexperienced dozer operator over- or under-corrects his blade elevation, choppiness and washboarding results. Once the undercarriage rolls over this wavy surface, the machine starts bucking like a ship in high seas. Finesse goes out the window. The Stable blade uses blade-mounted pitch sensors to keep the blade cylinder from overcompensating and cutting too high or too low too quick, essentially ironing out the differences so you get a smooth, even cut. It’s standard and remains on all the time unless the operator cancels it.

Strictly speaking this is not part of the automated blade control system, but it contributes a great deal to how well the machine works in the automatic modes. Traction control uses sensors in the engine and transmission to detect when the torque increases at the drive sprocket. When that happens it will slow down the tracks to prevent slippage. But more importantly, in many cases it will prevent the need for the operator to raise the blade to stop slippage.

“We had traction control as standard equipment on our previous machines,” says Joel Fritts, Caterpillar application specialist, “but you had to engage a button on the joystick to activate it. Now you don’t have to worry about that. It’s seamless. You just run the machine.”

The linchpin in the whole system is the optional slope assist. It automatically sets the blade’s cross slope and main-fall to whatever percentages you plug into the monitor. Tap in the angles you need on the display and go. Slope assist is part of Caterpillar’s ARO or Accugrade Ready Option. This includes a housing on top of the hood with the hydraulic and electrical connections for a full GPS system and welded bases on the top of the blade to bolt the GPS receiver masts to. These come with the ARO option, whether you decide to use GPS or not.

Why fabricate components at the factory to accept GPS for a dozer that doesn’t have it?

“Our idea is to give the customer a taste of what grade control can do for them,” Fritts says. “Some don’t see the return on investment for a full-blown GPS system, some are just scared of the technology, they don’t understand it. So we want to give them a simple solution.” The theory is that once they become comfortable with a low-tech version of blade control, they’ll be more likely to upgrade to full GPS later, in which case all they have to do is install the hardware.

Currently, traction control and stable blade technology are standard. ARO with slope assist are options on Caterpillar D3, D4 and D5 size dozers, but eventually this technology will migrate into bigger models as well.

So with all that as preamble, what’s it like to operate a Caterpillar D5K2 dozer?

All my previous attempts to operate a dozer of any brand had ended in embarrassingly lumpy results.  As one product guy once told me: “You have to drive by the seat of your pants, literally, you have to feel what the machine is doing with your butt.”

Alas, my butt, just never has been that sensitive. That, I suppose, would come from experience. 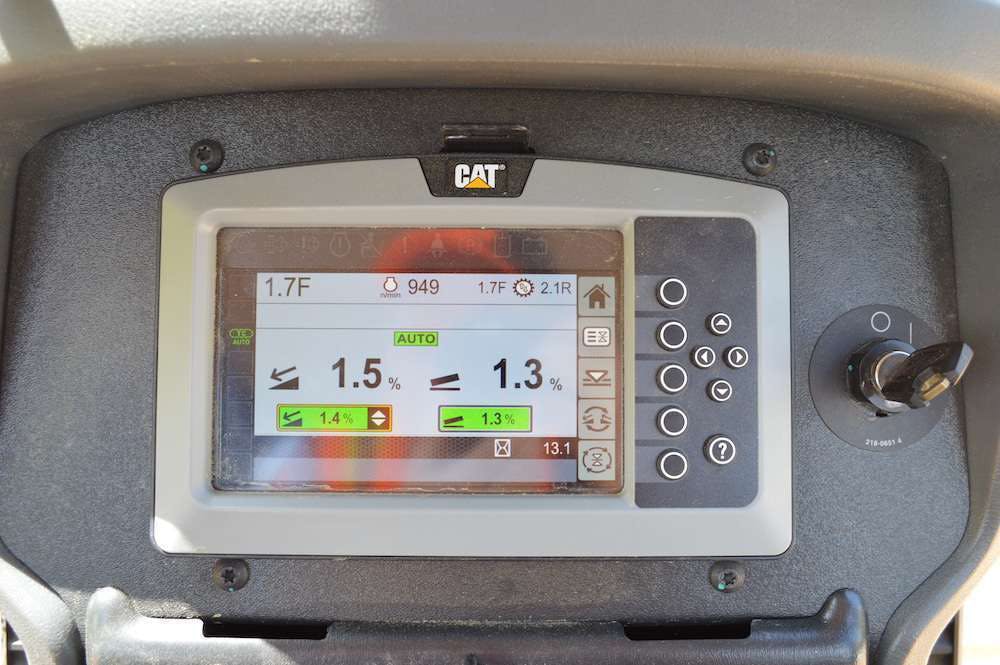 The in-cab monitor shows the main-fall angle percentages (left) and the blade cross slope (right). To change these you use the buttons on the right.

On my D5K2 test drive I started out on relatively flat ground to see how the stable blade function responded. Right as rain, it enabled me to cut a long flat lane on the ground with none of the usual washboarding and divots that come from an inexperienced hand.

To activate slope assist (or get out of it), you just push the yellow button on the right hand joystick and the blade cants to whatever angle you set it to, or whatever the last value was that you set it to on the monitor. Likewise, for your main-fall angle (fore and aft). If you’re not sure what the angle should be you can bench the blade on any part of the job that’s to grade, push another button and the blade will continue to hold those angles until you change it.

The only thing the operator has to watch is the blade elevation or depth of cut and steering. This greatly simplifies the multi-task demands a dozer normally confronts you with.

Caterpillar piled up a convenient mound of dirt for us to try the slope assist on, so I cut a longitudinal shelf into it about midway down, turned around and covered it back up, nearly good as new. 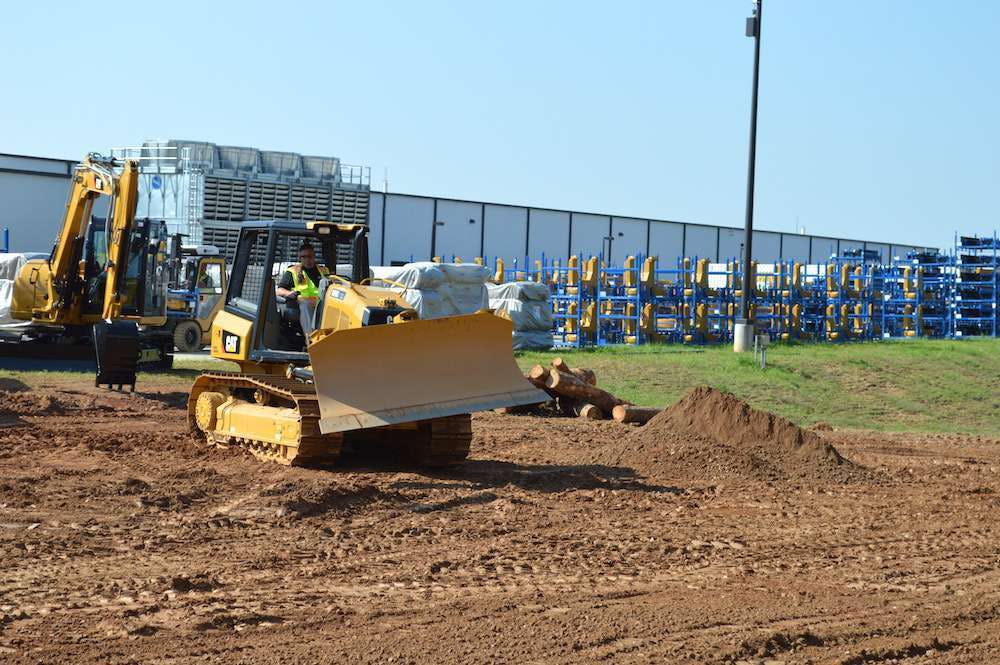 A Cat demonstrator shows how easy it is to maintain a course with stable blade and slope assist by taking a drink of water with his right hand as the dozer moves forward.

While cutting the bench on the mound I also noticed how useful the traction control could be. I hit a large rock/small boulder going forward that slowed down the tracks, but the dozer never quit moving and the blade stayed steady as she goes. Normally I would have been tempted to raise the blade and dump the load. Instead I just kept the machine pointed forward and let it do it’s work. Nice.

The bottom line is that Cat’s K2 series dozers do pretty much everything for you that a GPS system would do except controlling  blade elevation.

And when everything else is taken care of, blade elevation is fairly easy to eyeball and adjust—especially with good sightlines to the blade such as these dozers offer. There is nothing else to distract you from watching the dirt spill off the edges of the blade.

I’ve run other brands of dozers with full GPS in the past. In “automatic mode” that is an amazing experience, satellites in the sky precisely controlling the movements of your blade. In the GPS “indicate only” mode, you see the cut you’re making on the monitor but you have to control the pitch, main-fall and elevation of the blade manually to hit the target on the screen.

Using Caterpillar’s slope assist and stable blade, in my experience, is actually easier than using GPS in indicate-only mode.

I think Cat is correct in thinking this will help contractors get more comfortable with machine control and eventually step up to full GPS. But another reason I think this system offers value is that it is an excellent training tool. As I mentioned before, getting proficient at dozer work takes a lot of seat time and that means re-work, fuel burned, hours put on the engine. Experience doesn’t come cheap.

Given what I learned in Athens, I could see an inexperienced operator stepping into one of these dozers one morning and with a little instruction and monitoring be doing productive, decent quality work on simple jobs before the day ends. Additionally, I think an operator who racks up some hours on this low-tech blade control system is going to have a much better feel for the machine than one who learns on a fully automated GPS system or a simulator.

Muscle memory and an intuitive feel are not easily acquired, but the K2 series dozers will enable contractors to take less experienced operators and bring them up to speed faster than anything else out there. Best of all, these operators will require less training and be doing productive work all the while (rapidly) gaining valuable experience. Given that the K2 and slope assist/ARO options cost just one-tenth of the cost of a full blown GPS system, that’s a pretty good deal. 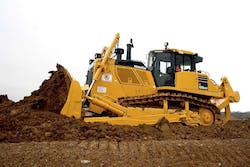 Komatsu unveils the D155AXi-8, its largest semi-automatic dozer yet 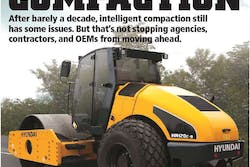 INSIDE IC: Though intelligent compaction is still being refined, the tech already offers plenty of value 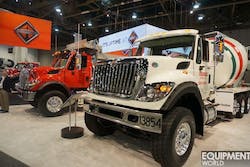 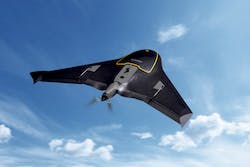