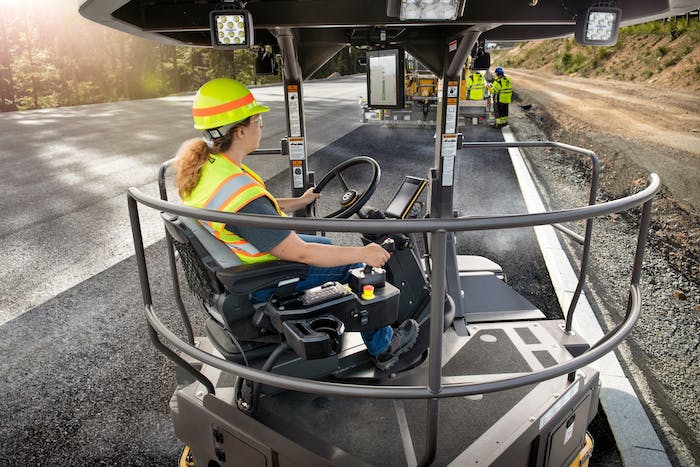 “We have already seen an increase in sales, because contractors seem optimistic that this federal funding will result in more business for them in the coming years," says Volvo Product Manager Mark Eckert.
Volvo CE

Compaction is an integral part of construction, and because construction has been strong, the demand for soil and asphalt compactors has also been doing well.

And with the new $1 trillion infrastructure law, the demand for compactors should continue to rise for the next five years or more.

“With $110 billion set aside for roads, bridges and other infrastructure projects, I certainly expect the legislation to increase the need for compactors, as well as other road- and bridge-building equipment,” says Mark Eckert, product manager, Volvo Construction Equipment. “We have already seen an increase in sales, because contractors seem optimistic that this federal funding will result in more business for them in the coming years. These jobs will be a mix of continued road maintenance and new construction.”

Although construction has held strong in recent years, “the compaction industry has not completely recovered to levels prior to the pandemic,” says Jeremy Dulak, product manager, Case. “Even so, year-over-year growth is expected again in 2022.”

The transportation funding portion of the law is just now beginning to flow to the states, meaning it probably won’t have a major effect until next year. But manufacturers have been reporting longer lead times on equipment orders, so contractors expecting a boost from the funding should start considering their compactor options now.

“Demand is expected to be greater than what can be produced because of supply chain challenges,” Dulak says.

Other market trends not driven by the infrastructure bill are also affecting the compactor market.

“We’re also seeing a move toward ‘green’ technology,” he says. “The adoption of hybrid and battery-powered operation we see on excavators and wheel loaders will trickle over to compaction machines.”

Cat Senior Marketing Professional Scott Knoblauch says customers are asking for help with machine guidance. That is especially needed for inexperienced operators when backing articulated rollers. This need is also fueled in part by the fact that operators with less experience are often assigned to compactors, he says, “which is probably the wrong thing to do if we’re going to meet target levels of compaction.”

Knoblauch says all operators should have a fundamental understanding of amplitude (size of the stroke), frequency (of the strokes) and resonance (whether the compaction force is transmitted into the material or reflected back into the compactor).

The goal is to achieve optimal compaction with the fewest number of passes and while also minimizing the risk of overcompaction, which would likely require reworking the lift. Inexperienced operators need help in attaining these goals, but even veteran operators need to remain vigilant.

He also says those delivering and placing material can introduce errors by creating too thick of a lift. “This appears to improve efficiency by delivering more material per truck cycle, but because the depth and consistency of the material is greater than the lift capacity of the compactor, inadequate compaction is the result.”

Seasoned operators can have their own unique errors, says Luke Sevcik, product application and training specialist, Wacker Neuson. “They get used to using the same machine, and when given new or unfamiliar equipment, they don’t take time to really understand the features offered.”

A review of the owner’s manual is the minimum necessary step in learning about a new machine. Dealer staff and OEM videos add to the basic understanding. 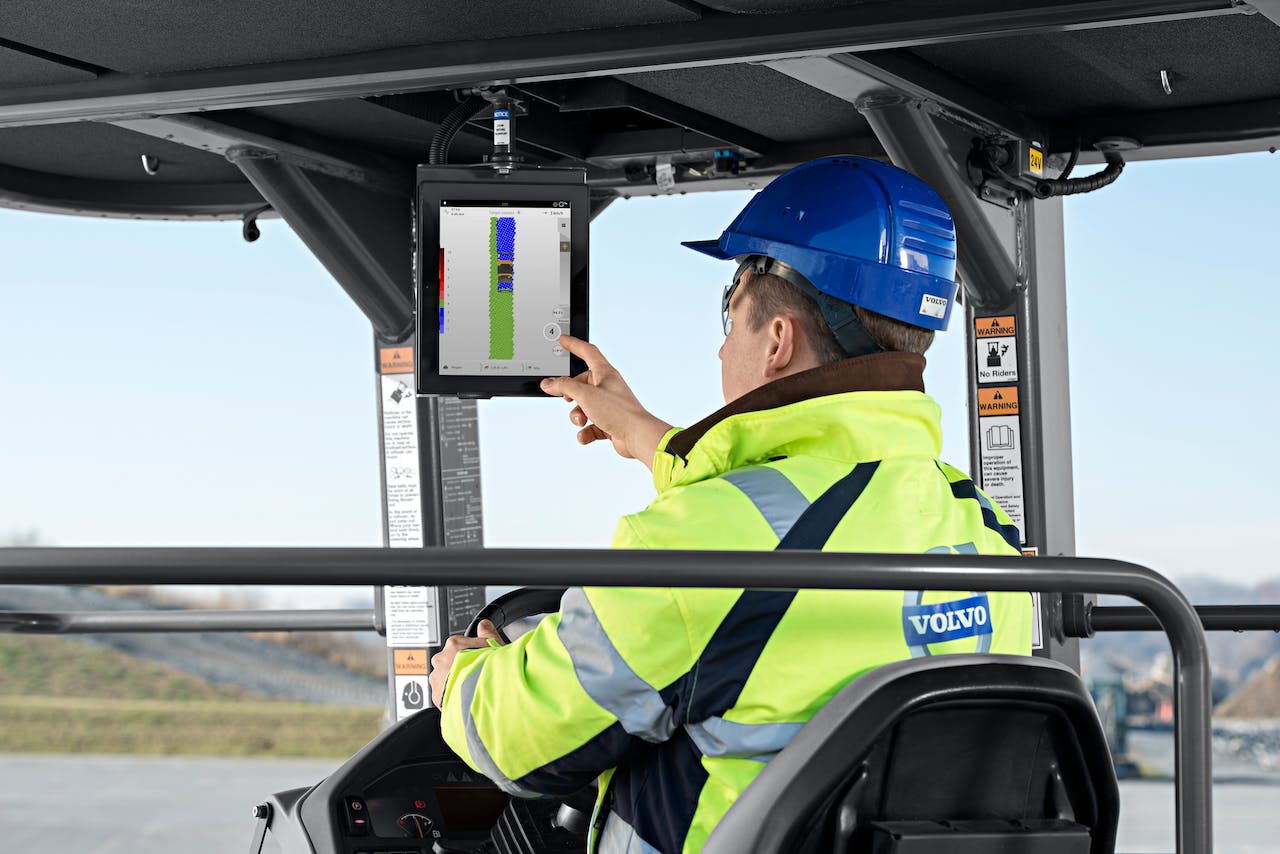 OEMs strive to build cabs that are comfortable and ergonomic to help attract and retain operators, he says, “but technology is another way we make their jobs easier and more productive.”

Eckert points to Volvo’s Intelligent Compaction (IC) system, Compact Assist, which provides real-time temperature and pass-mapping to ensure optimal outcomes on asphalt. While other systems typically use Intelligent Compaction Measurement Values (ICMVs), Compact Assist offers optional Density Direct, which provides real-time density calculations across the entire mat. Density values provided by ICMV have been shown by the FHWA to not be reliably correlated with actual density; Density Direct gives accurate values across the entire mat so operators can plan passes accordingly, he says.

Knoblauch says Cat Compaction Control can use either or both compaction meter value (CMV) and machine drive power (MDP). CMV measures soil stiffness and is an accelerometer-based system. It requires vibration. The readout can be a numeric scale or a series of red-yellow-green indicator lights. It is not as accurate on the first few lifts and in the presence of decoupling.

MDP measures rolling resistance. Knoblauch says with its gradient of compaction depth of 12 to 14 inches, MDP is well suited for the first few lifts.

“Once we have several lifts in place, we can switch to CMV,” he says. “Its gradient of compaction is 30 to 36 inches.” 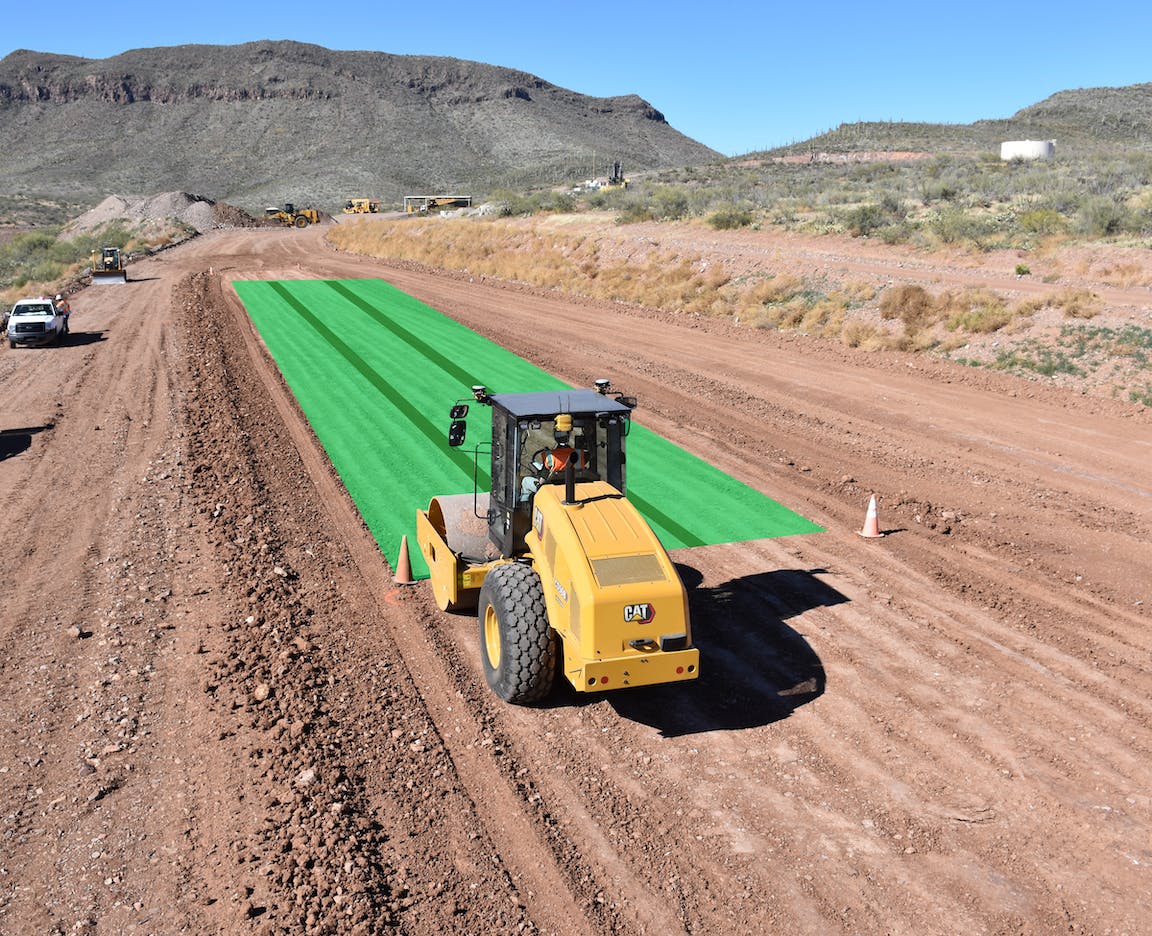 An integrated feature alerts the operator to nearby objects, so the operator can assume control of the compactor for safety. An alert is activated every 5 minutes to ensure the operator remains attentive and engaged.

Dulak cites two benefits of technology, such as the ACE Force Intelligent compaction system offered by Case, that lie outside day-to-day operation.

First: “Many civil construction jobs require evidence that compaction levels were reached to specification. Ace Force can generate reports for these applications where compaction performance was required.”

Second: Performing only as many passes as are required to meet compaction specifications saves on owning and operating costs such as fuel, preventive maintenance and repair. 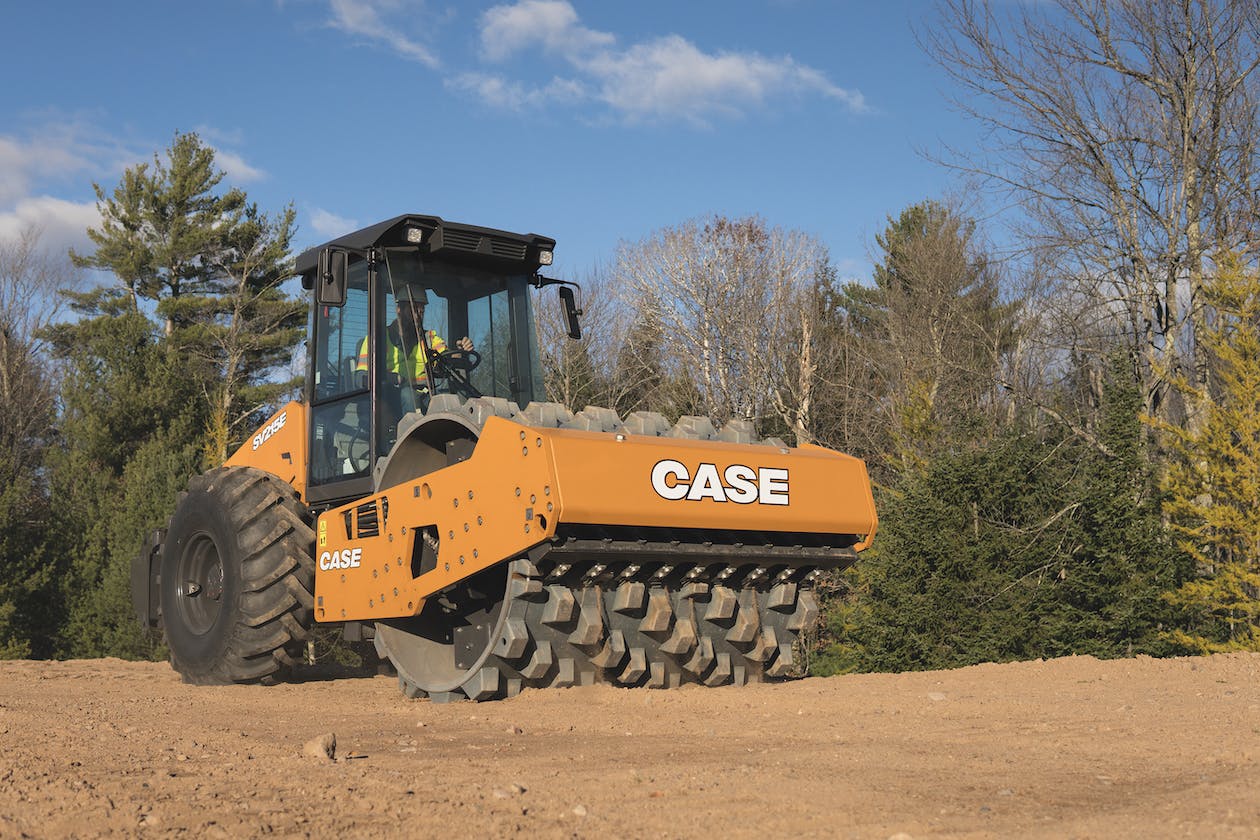 Introduced in November, the Case SV215E (above) and SV217E run on 154-horsepower engines. Operating weights are 73,063 and 74,861 pounds, respectively. Each is compatible with the company’s ACE Force Intelligent compaction system. The axle-free design uses an electronic self-adjusting torque control system and an HX drive propulsion system with automatic traction control.Case CE

Rent before you buy

“Compaction machines have always been a large part of rent-to-rent and rent-to-own,” says Eckert, “but we have seen it trending more toward straight rental in recent years.”

Paving contractors with short seasons, perhaps only five or six months long, he says, “just negotiate season-long rental contracts and opt to not own or maintain the machines.”

Rental is a great way to try out compactors before purchase to prevent making mistakes, says Sevcik.

“Customers can sacrifice performance for price, choosing too small a machine or one lacking ideal features and comfort,” he says of common first-purchase errors. “They should strongly consider renting different machines long-term to see which best fit their current needs and anticipated future needs.” 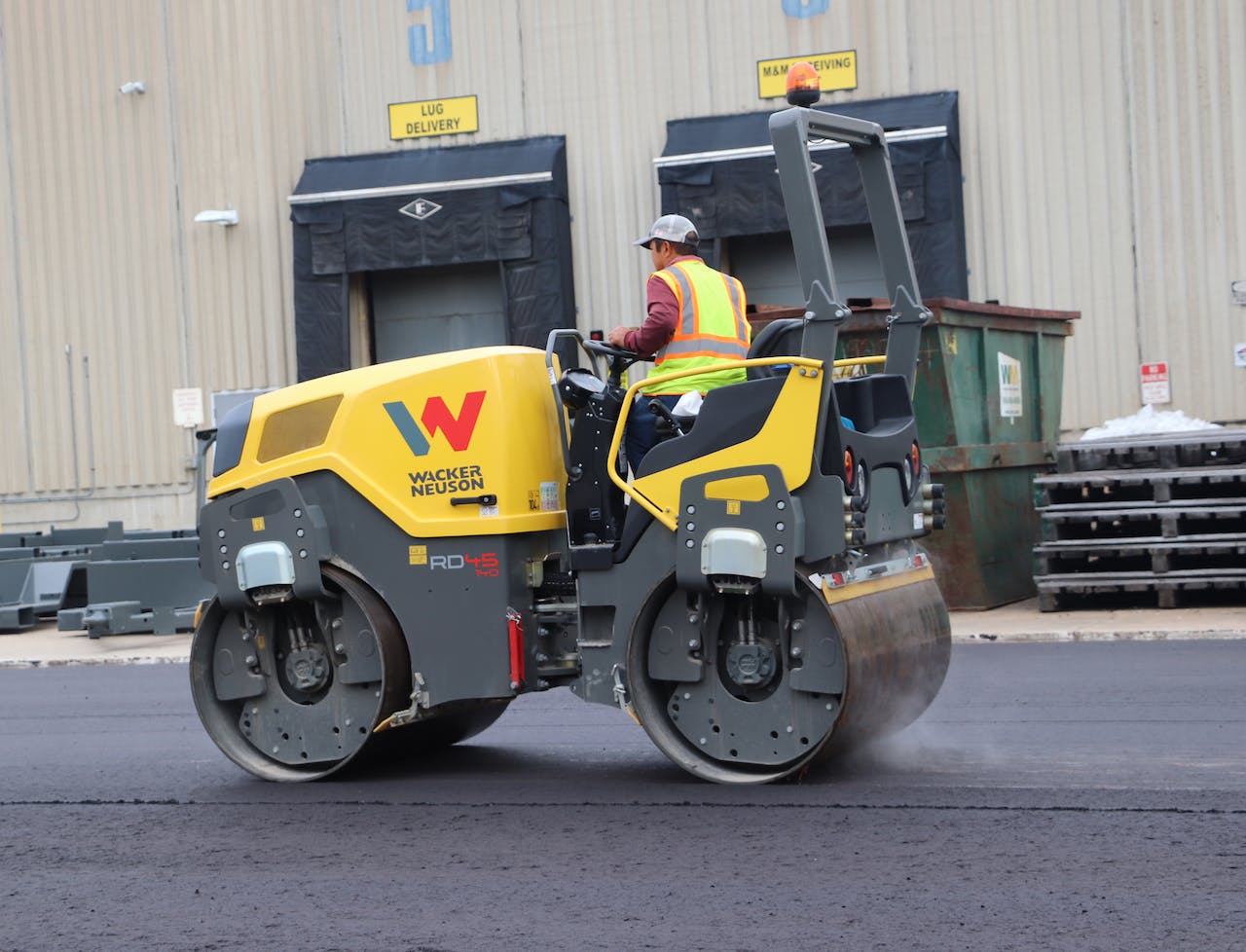 The 4.5-ton RD45 is the largest of Wacker Neuson’s six-model tandem roller lineup. Drum offset enhances maneuverability when compacting along walls. The three-point articulated pendulum joint ensures uniform weight distribution for uniform compaction and driving stability. Vibrating mode is ideal for all traditional compaction, while oscillating mode is designed for low-temperature asphalt and on bridges.Wacker NeusonWhen considering optimal machine size, he says, be sure to consider trailer and tow vehicle requirements and the possible need for a CDL.

Sevcik says contractors who have used plates or rammers can call on those experiences in deciding which brands and dealers to work with when purchasing ride-on compactor. “Past experience with walk-behind or attachment models can be an indicator of brand quality.” “Familiarity with a brand or dealer can also be a factor,” he adds. “But don’t be afraid to deviate from that, to try something new if it offers more bang for the buck.”