Wirtgen has rolled out a new paving train for construction of concrete roads and other structures.

The train starts with the company’s new WPS 102i Placer/Spreader and its SP 94i slipform paver newly equipped with TeleMold for quickly changing paving widths. The third and final piece in the train is the TCM 180i texture curing machine.

Wirtgen showcased the placer and paver with TeleMold as world premieres at World of Concrete earlier this year and will bring them out for October’s Bauma trade show in Munich, Germany.

The WPS 102i heads up the train by placing and spreading concrete in cases where there is continuously reinforced concrete pavement. The material can be placed from an offset position to the side and spread evenly across in front of the main paver.

“This is the first unit of this size machine that we have produced,” said Tim Nash, Wirtgen director of concrete products, at World of Concrete. “This will round out our line now for placing equipment in front of the paver.”

Placer/spreaders are used in pockets around the U.S., including in Texas, Oklahoma and California. It comes in handy when concrete trucks can’t access a site well enough to get to the paver.

The WPS 102i can place concrete at a thickness of up to 20 inches. It also features a modular design and standard hydraulic quick-change couplings for quickly changing widths. This also helps with fast transport from job to job, Wirtgen says. The WPS 102i can be precisely controlled by stringline scanning, stringless 3D applications or Autopilot 2.0 from Wirtgen.

SP 94i slipform paver with TeleMold

“It’s going to be a game-changer,” said Nash of Wirtgen’s addition of TeleMold to its SP 94i slipform paver.

The 32-foot-wide inset paver is designed for contractors working on wide roads and highways, airport aprons, taxiways and runways in which various widths are required on a single job. Without the TeleMold, changing paving width can take up to a day or a day-and-a-half, which costs contractors in downtime and labor. With TeleMold, Nash says, width can be changed within in one hour to an hour-and-a-half.

The self-propelled texture/curing machine is equipped with an automatic spraying and brooming system to create the desired surface texture.

As it follows the paver, the spray system applies a coat to the surface to prevent the concrete from drying out too soon. The modular design allows widths between 13 feet 1 inch and 59 feet 1 inch. 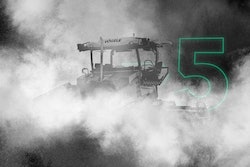 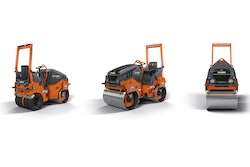 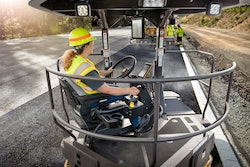