You might be tempted to say to that the MX diesel engine from PACCAR is all-new. But if PACCAR Chairman and CEO Mark Pigot were close enough to hear, he’d quickly correct you. “While it’s true that the MX engine family is new to North America, and the MX engine project is a 10-year effort that is finally coming to fruition, PACCAR has been building engines via our DAF subsidiary in Europe for more than 70 years,” Pigot notes. “Currently there are more than 125,000 SCR-equipped MX engines on the road in Europe, and PACCAR has relied heavily on the technology and real-world experience we’ve gain not only from our MX Engine series, but from the 50-year history of DAF diesel engine development in Europe and the more than 900,000 diesel engines delivered in that time.”

Fair enough, Mr. Pigot. But PACCAR’s new family of five diesel engines is a significant step forward for 106-year old PACCAR. One need only witness the staggering $1 billion total investment the Bellevue, Washington, company has made in this engine – including an all-new, $400 million MX Engine production plant in Columbus, Mississippi, that will begin producing engines later this summer. Add to that the fact MX Series diesels will now be offered as standard equipment on all Kenworth and Peterbilt trucks, and you’ll start to understand this engine’s importance to PACCAR.

The MX engine was developed by DAF and was an early recipient of selective catalytic reduction (SCR) emissions technology since European regulations were ahead of the U.S. Environmental Protection Agency’s 2010 diesel regulations that came into effect January 1st. Even still, PACCAR engineers put the MX engine family through rigorous testing to insure optimal performance in North American trucking applications. This included more than 125,000 hours of extreme application, durability and thermal shock cycle testing in 42 engine test cells as well as high altitude testing at Colorado’s Eisenhower Pass, high-temperature testing in the Mojave Desert and Arizona and cold-weather trails in Canada’s Northwest Territories. The end result, according to Craig Brewster, assistant vice president, PACCAR, is more than 50 million verification miles for the MX Engine Series in both real-world and test track conditions. “This lengthy and intense testing cycle has given PACCAR the confidence to release the MX Engine family with a 1-million-mile design criteria,” he says.

PACCAR says the key to this durability is the fact that all MX engines in this series are designed with Compacted Graphite Iron (CGI) heads and blocks – the only OEM in the industry to construct both crucial engine components from this lighter, yet stronger material. “CGI gives MX engine components a 75-percent increase in both strength and stiffness,” Brewster notes. “At the same time, it provides a 200-percent increase in thermal fatigue resistance. The result is uncompromised durability for long engine life using materials that are 150 pounds lighter than competitive engines using conventional cast iron components.”

An added bonus is that CGI is both quieter and transmits fewer engine vibrations to the cab of the truck. “We knew we were on the right track with CGI when drivers told us they could turn their radio volume down by half compared to their old trucks and still hear the music,” Brewster says. “The result is that a quieter, smoother ride results in less fatigued, more alert drivers.”

Other design enhancements for the MX Engine Series include integral fuel channels cut directly into the engine block, integrated, PACCAR-designed engine brake and a single crankshaft that so perfectly balanced it does not require counterweights, resulting in additional 25-pound weight saving for the design. “Every aspect of this engine family has been optimized to deliver leading fuel economy,” Brewster stresses. “This includes highly advanced electronic engine control systems that allow operation at 36,000 psi (25,000 bar) and integral power steering and fuel pump system to reduce parasitic drag.”

The MX Engine Family features an in-line, six-cylinder design with four valves per cylinder. Five separate engines make up the MX Series, with power ratings ranging from 380 to 485 horsepower and 1,450 to 1,750 pound-feet of torque. The engines come standard with a two-year/250,000-mile standard warranty. More than 650 authorized PACCAR dealers have already received extensive technical training to support the MX Series and each certified PACCAR dealer is required to have trained technicians, tools and parts on hand to provide full service support for the new engines. In fact, according to Kurt Freitag, director of aftermarket support, more than 1,000 Kenworth and Peterbilt technicians are ready now to provide MX Engine support, including Chairman/CEO Pigot, who rolled up his sleeves and underwent technical training (including a complete engine tear-down and rebuild) as the company geared up to launch its new, flagship MX Series.

Orders may be placed now for summer deliveries. PACCAR sources say pricing will be “competitive” with Cummins’ ISL engine and initial oil drain intervals are set at 40,000 miles. EW 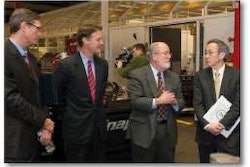