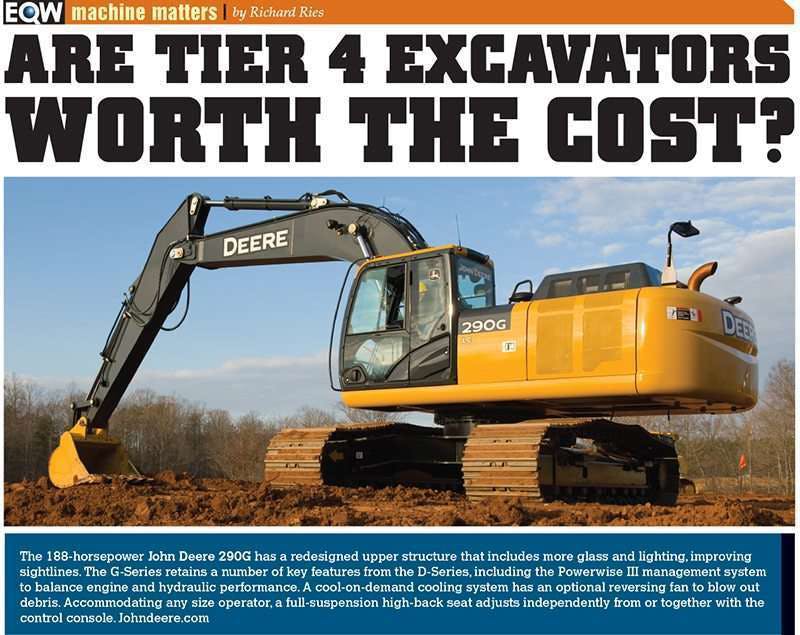 Tier 4 Interim excavators are rolling into the market with Tier 4 Final models close behind. They’re more expensive than the Tier 3 machines they replace. Is a low-hour used Tier 3 machine a better choice? Why pay extra just for a Tier 4 engine? Legitimate questions, so we turned to product managers for the answers.

To start, the option of buying a good-condition used Tier 3 machine is more complicated than it seems. Availability varies widely and Tier 3 excavators can be scarce in some markets. Those that remain in the selling pool may fetch high prices; those that are lower-priced may have issues with their condition, incomplete service records, or histories marred by serious repair events. “On top of all this, used Tier 3 machines can go to markets that don’t have ultra low sulfur diesel, so price and availability may not be as good as customers think,” says Vincent Whelan, excavator product sales manager with JCB.

Whelan is referring to Tier 4 machines’ ULSD requirement. While many manufacturers have announced ‘de-tiering” solutions that allow sales of Tier 4 machines into lower regulated countries that have higher amounts of sulfur in their fuel, it’s a resale complication that Tier 3 machines don’t have.

Still, with prices ranging from $168,000 to $260,000, Tier 4 machines are priced significantly higher than their predecessors. What do you get from that price increase besides Tier 4 compliance?

The answer is quite a bit. Most Tier 4 machines are complete redesigns of Tier 3 machines and offer improvements in all areas of performance.

Maturing of electronics enabled these sweeping changes. Electronics were still in their infancy when Tier 3 machines were developed. “Now that design and production standards are established for electronics, engineers can devote themselves to making changes in other elements of machine design,” says Whelan.

One of those “other elements” is the hydraulic system. Some of the changes were from Hydraulics 101 such as reducing or eliminating right-angle fittings and keeping tubing bend radii at no less than three times the inside diameter of the tubing.

But in many cases it’s the integration of electronic control with sophisticated new hydraulic components that provides the improvement. “Fine matching of pump performance to actual job conditions is an example of how improving the hydraulic system can improve fuel efficiency with no loss of performance,” says George Lumpkins, product marketing manager at Kobelco. “This allows the machine to operate at maximum efficiency in jobs that don’t require maximum performance, such as sewer work in a confined urban setting.”

Recent hydraulic developments look beyond flow and pressure. “Owners understand the effects of flow and pressure on performance but often underestimate the effects of hydraulics efficiency on fuel use,” says Chris Wise, product manager at LBX Link-Belt. Refined hydraulics on Tier 4 machines retain and often improve upon the performance specs of their predecessors while improving fuel consumption rates. Among the changes to Link-Belt hydraulics were a minimized flow during destroke (when a circuit is idle) and a quarter-inch increase in the diameter of hydraulic lines.

Manufacturers changed dimensions and placement of components to improve balance and performance. Many of these changes also accommodated the needs of Tier 4 engines and their aftertreatment hardware. Matt Hendry, hydraulic excavator product consultant with Hitachi/John Deere, says the main frame was lengthened 8 inches on Deere’s 290G and Hitachi’s ZX290LC-5 compared to the 270D and ZX270LC-3 models they replaced. This was to provide space for emissions components and side-by-side coolers in the new machines with minimal increase in engine hood height and minimal impact on operator visibility.

The improved balance of this design and optimization of the machines’ hydraulic systems provided significant improvements to performance. Arm and bucket breakout forces went up by 1,300 pounds and 1,900 pounds, respectively. Lift capacity at 20 feet over the front increased 2,499 pounds. “And for customers who already own 270D or ZX270LC-3 excavators, all their attachments will fit the new models,” says Hendry.

Even small improvements in production can have a big effect on profit, says Lumpkins. “Today many jobs can cost a $1,000 per hour with wages, benefits, machine, trucks, equipment, and material costs. If a new machine is 5 percent more productive—and this is a conservative figure—on a high production job the savings are $50 per hour, $400 per day and $2,000 per month. If the job has an early finish bonus, there are more savings,” Lumpkins says, “and none of this takes into consideration the potential downtime associated with used machines.”

One of the benefits of mature electronics is the ability to tailor machine operation to specific applications and operator preferences. Doosan’s DX255LC had three power modes: Power, Standard, and Economy. The DX255LC-3 adds P+ (Power Plus) for moving maximum material with minimal concern for fuel usage. “The range of overall performance is similar to the Tier 3 machines,” says Reardon, “but this provides another step in the progression. It’s like going from a 3-speed to a 4-speed transmission.” The newer machine also adds a Lift mode to the Tier 3 model’s Digging, Breaker, and Shear modes. There are user-settable presets for 10 hydraulic attachments; 5 each one-way and two-way.

Operator comfort affects productivity, and manufacturers continue to improve the operator’s environment with bigger cabs that are pressurized to keep out dust and higher-capacity air conditioning systems. Large displays and intuitive controls create an iPad-like experience interface. Virtually all Tier 4 machines are quieter than their predecessors. In some cases the difference is as little as 1 decibel. But because decibels lie on a logarithmic scale, even changes this small are a noticeable improvement. And some Tier 4 models have much greater drops in sound pressure levels. JCB’s Tier 4 machines brought sound down from 87 decibel to 72, about the noise level of a typical city street in daytime.

Komatsu’s new PC240LC-11 is one of the first excavators to meet Tier 4 Final regulations. Exhaust aftertreatment includes both a selective catalytic reduction (SCR) system and a diesel particulate filter (DPF). Diesel exhaust fluid (DEF) is required for use with the SCR; Komatsu specifies AdBlue DEF that meets ISO 22241 standards. Other features in the dash 11 series that help cut fuel costs are the standard adjustable auto idle shutdown function and ECO guidance on the color 7-inch monitor to help the operator minimize non-productive idling.

Warranty and PM considerations in a Tier 4 world

There are some variations in how OEMs are meeting Tier 4 regulations. The diesel particulate filter (DPF) on Link-Belt’s 250X3 has a service interval of not less than 4,500 hours. Link-Belt has an exchange program with a core charge, and Chris Wise says a factory-trained technician can swap out a DPF in 45 minutes in the field with no specialty tools required. Komatsu CARE includes two complimentary DPF exchanges in the first five years.

Deere’s 290G comes with an updated version of the 6.8-liter, 188-horsepower engine that powered the Tier 3-compliant model 270D. This IT-IV engine uses both a diesel oxidative catalyst (DOC) and DPF. Service life of the DOC/DPF is 8,500 to 10,000 hours. Time between automatic regenerations averages 19 to 22 hours.

The warranty and included service packages are enough to sell many customers on a new machine. These features are so popular that there’s something of a war going on among manufacturers to offer the best value.

In addition to two DPF exchanges in the first five years, Komatsu CARE covers scheduled factory maintenance for the first three years or 2,000 hours. Tier 4 models (interim and final) also get a 50-point inspection. “Used equipment doesn’t offer this value,” says Bruce Boebel, senior product manager of tracked products for Komatsu America. “An extended warranty or maintenance contract can usually be added to the purchase of a used excavator, but this added cost reduces the price advantage to buying used.”

Link-Belt’s 250X3, a Tier 4 Interim machine, has the same service intervals and uses the same fluids and filters as the Tier 3 model 240X2 it replaces.

Gradall has one crawler excavator in this size class, the 24.7-metric-ton XL5200 III. With a 153-horsepower engine, it’s not yet required to meet Tier 4 regulations, so Gradall is skipping the whole Tier 4 Interim phase. “We’ll go to Tier 4 Final across the board when the time comes,” says Bill Thomas, vice president of excavator products. “Customers have told us there’s no value to them in taking a two-step approach to reach Tier 4 Final.”

So is there a time where buying used makes sense? “Yes,” says Kent Pelligrini, Caterpillar excavator marketing specialist, “depending on the demand for the machine. Working where there’s a lesser duty cycle, such as loading crushed rock, or anytime there are very low hours of use in a year, such as utility work, a used machine may work well.”

And Tier 3 models were still solid performers. “The 270D and ZX270 are fast, strong, and reliable,” says Hendry. The cab was one of the biggest in the industry and had the most foot room. If a low-hour machine is the right choice for a customer, the 270D and ZX270 are excellent options.”

But in some applications, buying new is the only option that makes sense, says Pelligrini. “In a demanding job where up-time is critical in meeting production targets, new is the right choice.” That’s also true in applications where the excavator is the primary mover of material in a job where annual hourly usage is high. “With jobs requiring 2,000 to 5,000 hours per year, customers need to start with a low-hour machine,” Pelligrini says, and new is as low-hour as you can get. 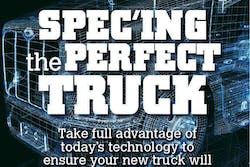