Firefighters hose dead fish off I-40 in N.C. after Florence floodwaters recede

Well we can add 'washing fish off of the interstate' to the long list of interesting things firefighters get to experience!

As floodwaters from Hurricane Florence receded from Interstate 40 in North Carolina, a smelly remnant sent a local fire department into unusual action.

“Well we can add ‘washing fish off of the interstate’ to the long list of interesting things firefighters get to experience!” reads a Facebook post from the Penderlea Fire Department. On Saturday, the department brought out a fire hose and water truck to hose off thousands of dead fish from the interstate in Pender County. The N.C. Department of Transportation later came in to complete the job. As water receded from I-40 and other roads over the weekend in eastern North Carolina, 455 roads were still closed in the state as of 6:30 p.m. September 23, according to the NCDOT.

The agency reported September 23 that I-95 had reopened sooner than expected. The main north-south artery through the eastern part of the state had been closed since September 15 due to flooding from Florence. 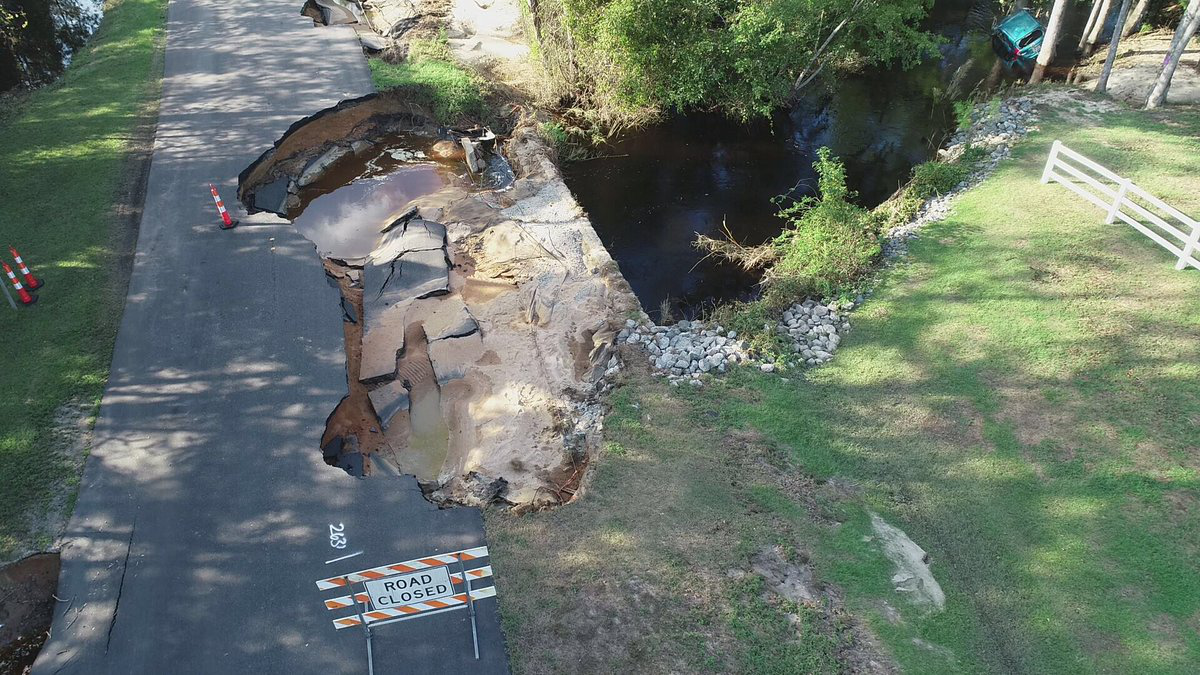 N.C. 210 in Bladen County, N.C., was washed out from Florence floodwaters. Photo: N.C. Department of Transportation

In South Carolina, where rivers are still rising in the northeastern part of the state, National Guard members helped install AquaDams on U.S. 17 in Georgetown, where flooding from the Waccamaw River is expected to lead to evacuations September 24. The Texas Department of Transportation reported successful use of the mobile, water-filled dams following flooding last year from Hurricane Harvey.

As of September 24, the S.C. Department of Transportation reported 144 road and bridge closures. The state’s section of I-95 that had closed to flooding is now open.

On September 24, the Waccamaw River continued to rise, leading to evacuations of homes. Below a video from Horry County Emergency Management shows flooding from the swollen river in Bucksport, S.C., posted September 24 before the river had crested.

#TeamHorry crews are out assessing flood damage throughout the community of Bucksport. Some areas are under as much as 2.5 feet of water already, and the Waccamaw River has yet to crest. We will continue to monitor the rising waters over the coming days. If you are faced with impending flooding, please take precautions. (Note: This video was taken Monday, Sept. 24, near Bucksport Road in Conway.)

AquaDam barriers being off loaded by the SC National Guard. These barriers will be installed later today along US 17 in Georgetown. pic.twitter.com/vhf8iO5yOh

Completed AquaDams installed September 24 on U.S. 17 in Georgetown, S.C., ahead of expected flooding from the Waccamaw River. Photo: SCDOT
Get the business tips, industry insights and trending news every contractor needs to know in the Equipment World newsletter.
Top Stories