Based in Clevedon, England, Mark Bridle has been modeling and collecting “for about 40 years.” He makes 1:12 scale radio controlled models from scratch, including the P & H 1900 AL electric rope shovel he shows here. Noting these models were used in the 1970s and 80s in open cast coal mines, Bridle visited the Nant Helen mine in south Wales and measured their parked 1900 as the first step to creating his model. Made primarily of aluminum and brass, the model is radio controlled, although a modified Jean Luc Picard Star Trek action figure is at the controls in the cab. The dipper is a replica of an Esco from “drawings they sent me,” tripped by a solenoid fitted to the back of the dipper door. The P & H is decked out in the color scheme of Coteau Properties in North Dakota. Made over 13 years, the model “survived one HO model railway, a garden railway and one wife. Her leaving compelled me to finish it.” 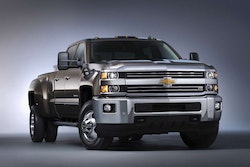 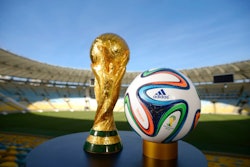 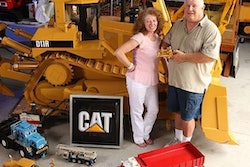