In order to strengthen defenses against future storms, those East Coast transportation systems heavily affected by superstorm Sandy will likely be forced to issue more debt in order to meet the large costs associated, according to Reuters.

Grants from the Federal Emergency Management Agency will not cover the needed measures to strengthen these systems’ infrastructure. Major transportation systems in New York and New Jersey took the brunt of the flooding, damage and power outages from Sandy.

Reuters quotes Mike McDermott, managing director of Fitch Ratings’ global infrastructure group, as saying the systems must begin to consider the likely “impact of the increasing occurrence of severe weather.”

“These costs could be substantial and will most likely be self-funded through unplanned debt issuance as grant funding could be hard to come by,” he said.

Of course, that debt would likely mean price hikes for those who use the transportation systems in New York City and New Jersey. Those fare increases could be slowly increased over 20 to 30 years. 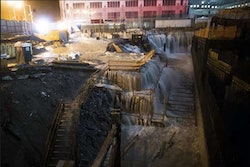