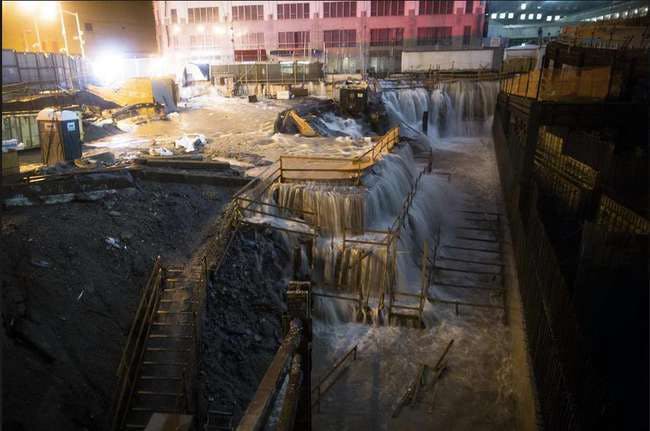 This photo from Twitter shows the huge amount of flooding Sandy brought to the World Trade Center site.

Despite the 15 to 20 feet of water that filled the World Trade Center site during superstorm Sandy, officials said expectations for flooding and other hurricane damage should be significantly better after the completion of the 16-acre redevelopment, New York City radio station WNYC reported.

WNYC quoted a government official who wished to remain anonymous as saying between 150 to 200 million gallons of water flowed through the lower level of the complex, which includes parts of 1 World Trade Center, the PATH terminal and the September 11 Memorial and Museum (the last two have been closed since the storm).

The official said approximately 40 million gallons had been pumped out as of mid-day Nov. 2, and he expects rates to accelerate with the addition of more pumps.

As of November 1, Sandy’s overall damage had been estimated at $50 billion. However, there is not yet a dollar estimate for the site because crews are still assessing the damage.

Once completed, the World Trade Center will have several features to help it withstand high winds and flooding associated with hurricanes, including a platform intended to rise 15 feet above grade level.