Ryan Whisner
May 25, 2022
The difference with the Clear 360 Pro, according to Clear 30 Ventures Inc., is you can maintain communication with colleagues, and you can still hear at safe decibel levels, what’s going on around you.
Getty Images

A company with ties to a 1980s rock band has developed a hearing protection device for construction workers that helps maintain users’ situational awareness and allows for communication among coworkers without removing the unit.

Clear 360 Venture Inc., a subsidiary of Bongiovi Media and Technology, has released the Clear 360 Pro, a wearable hearing enhancement and protection device that uses patented hardware and proprietary processing software to focus on hearing protection, communication and maintaining situational awareness.

The device was produced by a team of medical doctors and sound engineers from Bongiovi Acoustics in collaboration with Trimble’s SITECH distribution network.

“My goal has been to find something that someone can wear in a loud noise environment and still pretty much hear like they would hear without the device on,” says otolaryngologist Dr. Stan Phillips, a member of the National Hearing Conservation Association.

There is a multitude of hearing protection devices available on the market for those in the construction industry . As a hearing specialist, Phillips says he is aware that such devices are simply not worn as much as they should be. Nearly 40% of construction workers have some level of hearing loss, and the majority say they don’t wear hearing protection. He says the two reasons most often cited are they can’t hear what’s going on around them and they can’t communicate with their coworkers.

The difference with the Clear 360 Pro, according to Phillips, and Joseph Butera, chief technology officer at Bongiovi Acoustic Labs, is you can maintain communication with colleagues, and you can still hear at safe decibel levels what’s going on around you.

The Clear 360 Pro is an earbud-style device with a collar to hold the battery pack. The device holds a 16-hour charge and has a fast charge, so if you fail to charge it the night before, you can plug it in over lunch, and you’ll be good for the rest of the day.

Chris Lee, a data service support specialist with SITECH Chesapeake, was among those who has tested the Clear 360 headset, while working around heavy civil construction equipment.

“I handle a lot of support calls during the day, so the headset gives me the flexibility to take these calls without sacrificing sound quality or loudness levels,” he says. “The ability to switch between noise canceling and hearing enhancement sets this headset apart from the rest. I have used a lot of wireless Bluetooth headsets to accommodate my work tasks in the past, but they don't compare to this unit.”

No noise is good noise

By not wearing hearing protection consistently, many construction crews are putting themselves at risk of hearing loss or worse. In construction alone, it is easy to be exposed to any number of sounds in the form of continuous or impact or impulse noises that exceed 100 decibels.

According to Phillips, such continued exposure can lead to ear damage, anxiety, depression, severe mental health issues and even Alzheimer’s disease. To put that in context, OSHA regulations set the limit at 90 decibels, and the National Institute for Occupational Safety and Health recommends a limit of 85 decibels.

For example, the simple task of pulling a wrench out of toolbox and jostling the set of sockets at the bottom can be as high as 95 decibels. Such instances are what Phillips refers to as impulse noises. which on a technical basis would require hearing protection. He says that impulse noises like that are more dangerous than some of the general noises produced on a jobsite.

Human ears can only be exposed to so many nail gun or jackhammer sounds in a 24-hour period before getting hearing loss.

“In your daily life, you don't think of those things as being loud, because they happen really fast, but they start to cause damage over time,” Butera says. “We're protecting you, even if it's just a little bit over that threshold, we'll turn it down a little bit. We never turn it down more than it needs to be turned down. We only turn it down the amount that it needs based on the model of human hearing that we've created.”

He says the Clear 360 Pro is calibrated at an 85-decibel range as it duplicates the process of sound passing through the ear canal. “The sound waves hit the microphone the exact same way they would hit your eardrum, which is what makes the magic happen,” Butera says.

The key is how the brain processes the impulse noise. For any device to be effective against it, it must knock down the noise within 10 milliseconds. Through third-party testing, the Clear 360 Pro’s attack time on such sound is reportedly 3 milliseconds.

“If we make our electronics perceive loudness the same way as our brain does and it changes the volume level, we don't notice it because it seems natural,” Butera says. “The sounds are just coming in and your brain's processing that input signal, figuring out 360-degree awareness, speech intelligibility and noise reduction. Your brain does all of that, so if you can give it a true signal, you don’t have to build that into the device.”

From a technological perspective, the device works by using the patented medical digital power station technology. Or as Phillips states, it can control the volume level the same way your ears do.

Even during periods of quiet at a construction site, situational awareness and communication could be maintained, while remaining protected when another machine or the noise ramps back up.

To ensure the Clear360 works properly, the company developed its own foam tips to meet the benchmark ratings. The instruction manual details exactly how to fit the foam pieces so you can wear the device all day long. There are three foam sizes to ensure users can find the right fit.

“It's the same concept as an earplug but there's a high-quality earbud speaker behind it that you can listen to music and talk to your co-workers and everything all at the same time,” Butera says.

However, users must keep in mind that, despite the technological advances, physics still apply.

While you still must yell at your coworkers, if you're both wearing the Clear 360s, your yelling is picked up and heard as if you weren’t wearing any hearing protection. The device brings the noise level of the rest of the world down about 10 decibels, which, from a sound perspective, is like cutting it in half. Butera equates it to talking in the kitchen with the dishwasher running.

“We deal with this kind of stuff all the time so the whole world being 10 decibels quieter is not a big deal to us, you just yell over the machines,” he says. “There’s no pushing any buttons or making any adjustments to the device, you just yell over to your coworker, and they’ll hear you.”

However, he said, one thing users should be aware of is their own voice sounds louder when their ears are plugged.

“You get used to that," Butera says, "and you just understand that your voice is a little louder to you than it is to everybody else.”

Despite limits, he claims the noise reduction on the microphone in relation to phone conversations is amazing.

“You can have a conversation, and the folks on the other side, have no idea that there's a generator running right next to you or something like that,” he said. “People just have that normal conversation folks don't know you're in this crazy environment.”

The Clear 360 Pro has five primary modes of operation:

Across the spectrum of different modes, Butera says, Bluetooth audio quality changes as well. Voice and Super Hearing modes are more about speech intelligibility for phone calls, communicating with co-workers, etc. “If you play music, while you're in mode one and mode two, it sounds terrible because it's about the voice,” he says. “You're supposed to be working when you're in mode one and mode two.”

Natural and Comfort modes are more when a user has taken the unit home and is mowing the grass or doing a DIY project. Butera notes that considering the Bongiovi Media and Technology legacy in the music industry, it was a foregone conclusion that the device was going to be able to play music at a quality level.

Plans are to possibly have the device have sound profiles from jobsites to adjust to accordingly.

“We're the only product that you can essentially manipulate frequencies,” Phillips says. “You can literally go into a loud noise environment, sample that noise and then you can flash it into the device to determine how best to protect your ears.”

The hope is that contractors will see the Clear 360 Pro as a way of improving safety, reducing workers-compensation claims and improving productivity on jobsites. 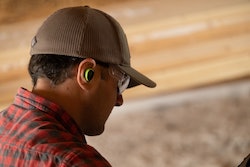