Cat Renamed the D6K2 Dozer to the D4. Here’s Why They Did It

The D4 is a new addition to the Caterpillar medium size dozer lineup. But it’s not a new machine. It’s the new name of the former D6K2. In the video below, we break down the reason behind the name change as well has how Cat’s new approach to naming dozers is part of a restructuring of the whole dozer lineup.

Back in 2017 Cat began a major rethinking of the way it names its machines. The feeling both within the company and among some customers was that the model names had gotten too complicated.

The D6 dozer was a perfect example of this. At one point you could opt for a D6K2, a D6N or a D6T. And all of those were very different machines. Yet they all started with “D6”. Despite the letter modifiers, most everybody referred to whichever of those machines that they had as simply a “D6”.

The trouble is that model names—especially in the context of appearing in a brochure or a lineup overview on a website— should give you a quick, at-a-glance idea of how one machine compares to another within that lineup. Having multiple machines with different identities but essentially the same name, just wasn’t cutting it anymore.

So, three years ago Cat started cleaning things up by removing the alphabet soup that had begun to accumulate within its model names. Almost two years ago, the change came to Cat’s medium size dozer lineup with the introduction of the next generation D6 and D6 XE, the new D5 and the new D7.

As these model names bear out, the Cat dozer range is now being named from smallest to largest with no more letter modifiers. Which means no more Ns, Ks, or Ts to remember.

But wait a second, if Cat is dropping letter modifiers, what gives with the D6 XE?

In the past, Cat used letter modifiers to differentiate machines when it offered than one model for each size class. With this new naming convention, that’s out the window, because each size class will only have one model. The XE in the D6 XE signifies a premium configuration. In the case of the D6 XE that’s an electric drive powertrain. Another “XE” machine Cat recently released is the 420 XE backhoe. Though the 420 XE is nearly identical in terms of performance to the standard 420, the XE boasts extra features aimed at convenience and comfort like seat-mounted controls. (Check out our full coverage of the 420 XE here.)

But back to the D4, which used to be the D6K2. Cat made this change pretty quietly. They didn’t send out a press release or even announce this rebadge. We actually first heard about it during a conversation with Cat dozer product application specialist Sam Meeker who says the change was made at the factory about a month ago.

Meeker tells us that Cat didn’t hold a product introduction or announcement for the D4, because it’s not a new machine. It’s simply the D6K2 with a new model name that better fits within the new dozer model nomenclature.

“So we did just change the D6K2, we literally pulled the old sticker off and put the new sticker on and changed that into the D4 with no new product introduction on that tractor,” Meeker says. “And one of the key reasons for that was because we wanted to align with the small tractor side, the D1, D2 and D3, and make sure that we’re kind of aligned with them, and not having a D6K2 in the middle there.”

As Sam mentioned, Cat has also been working on new D1, D2 and D3 tractors at the small end of its dozer lineup. Because Cat is numbering by size class, the D6K2 would now slot between the D3 and new D5. And things would have looked a bit weird if the lineup went: D1, D2, D3, D6K2, D5, D6, D7. The D4 name obviously made much more sense there.

And that brings up another note about these model name changes. The D4 is the first name change to be made within this new nomenclature without some update or improvement over the machine it replaces. For instance, the new D6 dozers were ground up overhauls of the D6 size class. The new D5 not only replaces the D6N, but it’s heavier and has more horsepower. The same goes for the new D7 over the D7E and D7R that it replaces.

But the D4 is literally just a rebadged D6K2. It has the same Cat C4.4 engine with 130 hp, the same size and footprint, and it has the same operating weight of 29,258 pounds.

The D4 carries over the D6K2’s electro-hydraulic controls and an undercarriage aimed at providing a smoother ride and better grading performance with eight bottom rollers and two carrier rollers. And the undercarriage is another difference between the D4 and the rest of the latest medium size dozers Cat has announced: it’s now the only one with a low-drive undercarriage. The D5, D6 and D7 dozers have all gone to high-drive configurations. 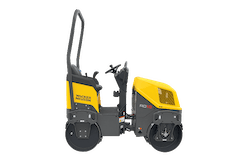 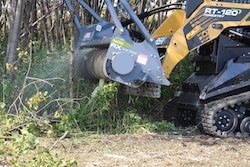 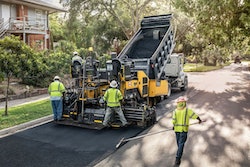 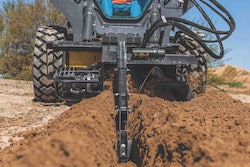