Now that hydro excavation and soft dig are becoming popular as underground contractors seek more ways to avoid utility hits, two basic problems with the process have come to the forefront, says Vermeer.

One is dumping the spoils in an approved manner. The other is getting an uninterrupted full day’s service out of a hydrovac truck, which can reach spoil tank capacity before the day is over, causing work to stop while the truck travels to and from an approved dump site.

“Your crews are tied up and they are waiting,” said Doug Hundt, president, industrial, Vermeer, during the bells-and-whistles reveal of the company’s XR2 vacuum excavator at ICUEE.

Instead of having the unit retain all materials in one spoil tank and then make multiple disposal trips, the XR2 separates the solids and liquids on board and onsite.

As with a traditional vac truck, crews use a high pressure water wand to break up the ground, and the vacuum boom removes material from the hole. That’s when the similarities between a traditional unit and the XR2 end, Vermeer says.

When material is vacuumed up through the 21-foot XR2 boom, it goes into an onboard deceleration tank that exits trough a continuously vacuuming airlock that prevents any suction loss while vacuuming, Vermeer says.

The material is then dropped onto a shaker deck that separates solids and liquids. The solids are conveyed out the back of the truck via a 14-foot remote-controlled conveyor that can be positioned sideways in a 180-degree rotating radius and has up to an 80-inch discharge height for truck loading. The resulting material can either be left on site or carried away, depending on jobsite and local requirements.

“We needed to maintain all of the performance of a traditional vac truck,” Schroeder says. The 6-inch hose produces up to 3,400 cfm of suction; the unit has a reverse flow function to dislarge large chunks of material. All functions can be controlled through the unit’s remote.

The XR2 has four 500-gallon side-by-side tanks that carry 1,500 gallons of water. The XR2 arrives at a job with three tanks full of fresh water and one tank empty. The unit has a freshwater transport weight of 51,000 pounds.

After separation from solids, the remaining fluid is routed from underneath the shaker screens to the empty tanks on the truck. As work proceeds, processed liquids are first pumped into the unit’s reserved empty tank and then automatically switched to another tank as the freshwater supply is depleted and the reserve tanks fill up.

The tanks are designed with sloped bottoms, so slurry can be pumped out before freshwater is replenished. Tank levels can be viewed anytime from the control station located on the side of the XR2.

The XR2 return weight is around 53,000 pounds when at the recommended full capacity of 10.5 ppg of slurry, an important factor in adhering to DOT truck and trailer weight restrictions.

“Being road legal to and from the job site was critical,” Schroeder explains. This meant a balancing act between water capacity and weight.

The XR2 uses a Kenworth T8800 truck with an Allison automatic transmission and Chelsea PTO. The units has a curb weight of 39,000 pounds and a return weight of 53,000 pounds when at the recommended full capacity of 10.5 ppg of slurry. With the conveyor in transport position, the truck measures 36 feet long, has a width of 102 inches and a height of 138 inches.

The PTO automatically transitions power between the vacuum system and the truck drive system. Crews no longer need to manually disengage and reengage the system every time the unit is moved. 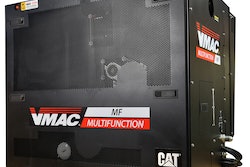 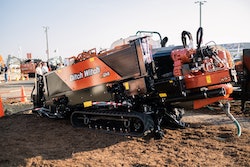 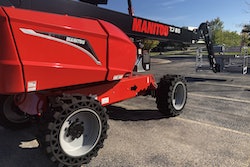