Caterpillar gave a sneak peek of a new automated soil compaction system that allows the operator to simply tap a few buttons to get the compactor automatically rolling, rather than having to input a load of data.

The new Command for Compaction system’s touchscreen for Cat’s B-Series vibratory soil compactors enables the operator to set a few parameters, hit “auto,” and the compactor takes over. The system controls the compactor’s forward and reverse movements and vibration. It uses common base stations and does not need design input or back-office assistance as with other intelligent compaction systems, Cat says.

“The system is simple,” said Dave Gerding, Cat global sales consultant, during a press event at Cat Paving’s headquarters in Minneapolis. “You tell it where to compact, and it’s ready to go.”

To operate Command for Compaction, the operator defines the compaction area boundaries on the screen map with a finger, then sets  parameters, such as the number of passes and speed, by touch. After releasing the parking break, the operator touches the word “auto” and then “OK,” and the compactor begins to roll.

The system takes over the steering, keeping the compactor rolling forward and in reverse over the desired path. Cat calls it an “operator-assisted technology.” The operator must remain in the seat for it to work. If the operator leaves the seat, the compactor shuts off.

The operator can also override the automated vibration setting. For instance, if there is an area where vibration is not needed for compaction, the operator can turn off vibration until the area has been passed and then re-engage it.

To watch the system in action, see the video below:

The goal of Command for Compaction is to give contractors reliable compaction quality “by maintaining constant speed and correct pass count with consistent and precise overlap,” according to Cat. Gerding says it can also help novice operators get up to speed quickly.

The system saves recent jobs performed, to be accessed by the touchscreen when needed.

Command for Compaction will be available in the first quarter of 2020 and can be added to select new or existing B-Series vibratory soil compactors by dealer-installed kit, Cat says.

Along with the Command for Compaction system, Cat Paving also announced it would add standard rearview cameras on new B-Series soil compactors starting in spring.

The rear view will be displayed on an 8-inch screen and will remain on at all times during operation, not just when driving in reverse. Gerding says this will increase safety, especially as compactors spend about half their time in reverse.

Cat also plans to add a “sharing” function on the compactors in which operators can see the compaction measurement of other soil compactors on the jobsite. 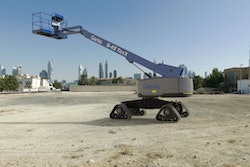 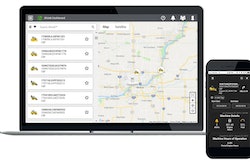 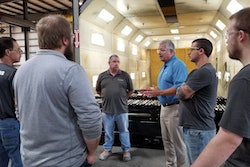