As the next step in its arc toward developing truck platooning technology for real-world use, Volvo Trucks recently performed an on-highway demonstration of a three-truck platoon made up of Volvo VNL tractors and 28-foot twin trailers in Raleigh, North Carolina. The demo was held in partnership with FedEx and the North Carolina Turnpike Association and was conducted on one of the few public highways designated as an autonomous proving ground by the U.S. DOT — N.C. 540, a tolled freeway dubbed the Triangle Expressway.

Volvo’s platooning technology relies on vehicle-to-vehicle communication and advanced driver assist systems (like active braking and advanced cruise control) to enter into a platoon, with the trucks and trailers spaced 1.5 seconds apart — about 120 feet at 60 mph.

Though platooning offers fuel economy benefits by way of decreasing aerodynamic drag, Volvo said the focus of this demonstration was on safety benefits.

“Volvo Trucks has long supported platooning because it benefits freight companies and professional drivers alike through safer, more fuel-efficient operations,” said Per Carlsson, Acting President of Volvo Trucks North America. “We continue preparing for deployment of trucks with greater vehicle-to-vehicle communication capabilities that support higher levels of ADAS. We know these technologies will be part of our future, but exact timing depends on many things, namely regulations, infrastructure, safety standards, and market demand.”

All three trucks in the platoon — one VNL 670 and two VNL 300s — were operated by professional drivers, who maintain control over the vehicle’s steering while the trucks are in platooning mode. However, using advanced cruise control and wireless vehicle-to-vehicle technology, the second and third trucks are able to maintain their following distance from their lead truck without the drivers having to use brake or throttle. The trucks were loaded with simulated loads, operating at a gross vehicle weight of 77,000 pounds each.

Whenever the lead truck slows or brakes, that information is shared instantly with the other two vehicles, which then slow, brake or accelerate based on the information from the lead truck. Drivers can assume control of the vehicle if necessary, such as if a vehicle comes between the trucks and breaks the platoon. 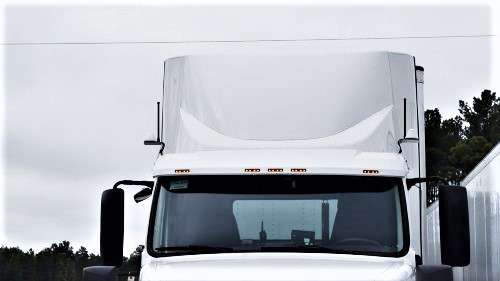 Vehicle to vehicle communication takes place via small antennas mounted atop the trucks’ hood and transponders mounted above the bumper.

Vehicle to vehicle communication takes place via small antennas mounted atop the trucks’ hood and transponders mounted above the bumper. “Volvo’s V2V technology is based on Dedicated Short-Range Communication (DSRC), which has proven its capability to perform well in the V2V environment,” said Keith Brandis Volvo Trucks North America vice president for product planning.

Volvo has been a proponent of platooning technology since its inception several years ago. Though it has an ownership stake in platooning developer Peleton, Volvo said the platoon demonstration today relied on Volvo-developed technology, not Peloton’s system.

An 18-mile stretch of the Triangle Expressway outside of Raleigh makes up the autonomous and platooning testing grounds, roughly 100 miles from Volvo Trucks North America’s headquarters in Greensboro, North Carolina. The company says it intends to continue to test its platooning tech on N.C. 540 to refine the technology and identify the drawbacks and benefits of use by fleets. 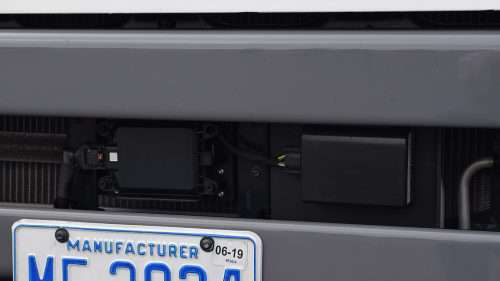 Vehicle to vehicle communication takes place via small antennas mounted atop the trucks’ hood and transponders mounted above the bumper.

Volvo last year held a platoon demonstration on I-110 in Los Angeles in simulated real-world conditions, carrying drayage containers from the Port of Los Angeles. That demonstration was conducted in conjunction with the University of California-Berkley.

The North American Council on Freight Efficiency in 2016 called platooning “the next logical” level of truck automation and said it can boost fleets’ fuel economy.