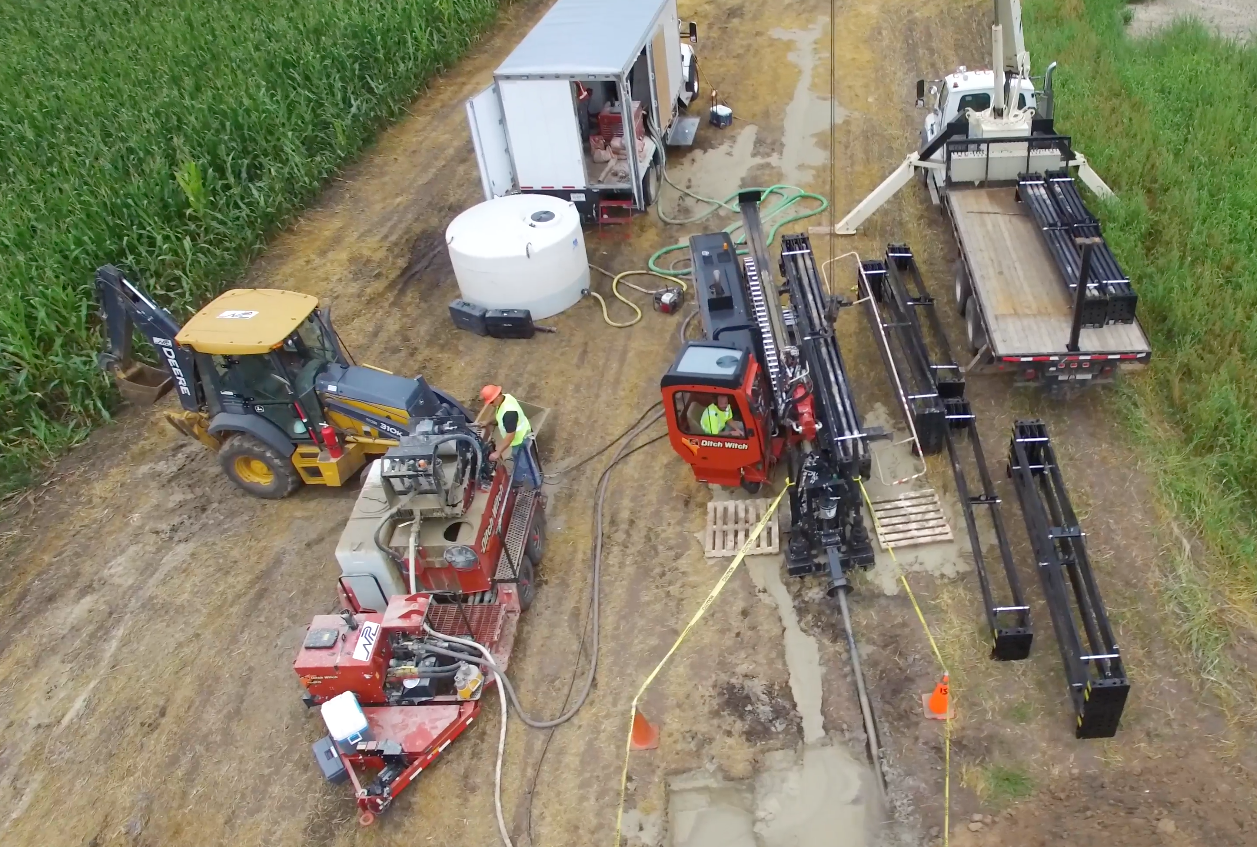 NPL Construction, a national energy construction firm based in Phoenix, Arizona, took on a tough project last fall when crossing the Blue Earth River, about 10 miles south of Mankato, Minnesota.

Working for Benco Electric, NPL installed duct under the river, a project that would replace an aerial electric cable, the only part of Benco’s electric system in the area not underground. “We got involved after three failed attempts made by another contractor using rented equipment,” says Mike Theis, NPL superintendent.

Both surface and subsurface conditions on the site posed challenges for NPL. The launch point was 75 feet above the river, after which the drill path ran 22 feet below the river bottom, crossing the river to come up 188 feet to the exit point on an eroded hillside. Soils on site contained sand, sandstone, limestone and cobble. (The total bore, recorded in the drone video below, was 1,220 feet long.)

Both a 36,000-pound pullback and a 60,000-pound pullback drill were used on the previous unsuccessful attempts to make the crossing. “They were unable to track the bore to the exit point and had to abandon each attempt,” Theis says.

NPL’s pilot bore under the river was completed with a Ditch Witch JT60 AT all-terrain drill using a 6 ½-inch bit, but the 4-inch poly duct got stuck during pullback. Crews then bored a second pilot hole, which enabled NPL to complete the pullback. Because of the 4 ½-foot depth of the river, the operator using the Subsite Electronics TKQ tracking system was able to walk the length of the bore in waders.

NPL recycled the drilling fluid. “It was imperative to avoid inadvertent returns that would release drilling fluids into the river,” Theis says. “The AT drill units use about the same amount of fluid as a conventional machine, and enabled us to drill through rock and avoid using a mud motor, which was unacceptable on this job.” Theis estimates that recycling saved the company about 75 percent in fluid costs by reducing the amount of water needed, saving on fluid additives and reducing water hauling costs.

The installation was completed in two weeks.

Editor’s note: Materials for this story and video were provided by Ditch Witch.