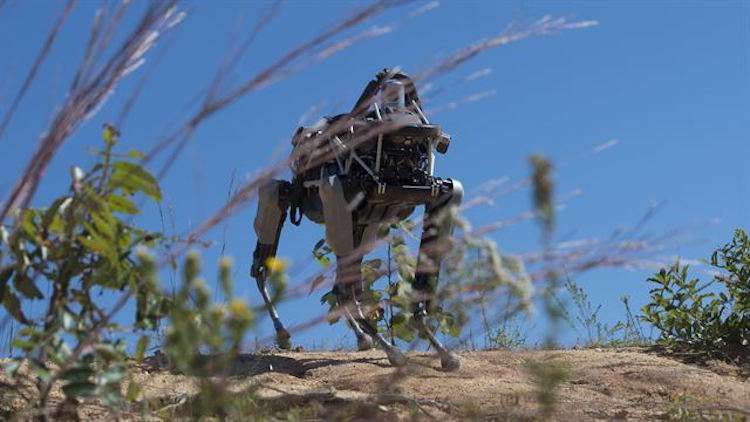 By far the coolest and creepiest photo of Spot. Photo Credit: Boston Dynamics via Ars Technica

If you don’t know Spot by name, then you’re probably familiar with this made-of-nothing-but-knees robot dog’s jerky (and slightly terrifying) movements from its numerous TV appearances over the last few years.

In that time, Google-owned robotics company Boston Dynamics has developed four versions of the dog, including Spot, the latest. And now, according to a report from Ars Technica,  the Marine Corps is giving Spot a trial run to see if it can provide helpful aid in combat situations.

Spot is being put through numerous tests in Quantico, Virginia, where the Marine Corps Combat Development Command is based. The Corps says they’re particularly interested in whether Spot could help out in scouting missions and as a load carrier. It certainly looks up to the task. Just check out this video of the robot in action.

Right now, Spot, which is electrically powered, is operated wirelessly via a remote control similar to a video game controller, that must be tethered to a laptop. That means the Marine in control has to be within 500 meters of the robot, though not within line of sight.

We’ve already seen the numerous ways drones are already helping out some contractors, and once a robot like Spot gains autonomous control like those UAVs and is able to, say, follow around its companion or be dispatched with a vocal command, load carrier robots of this type could be of huge value on jobsites as well.

The potential uses for Spot in construction are practically innumerable, from something as simple as toting tools and materials across a jobsite or as complex as following a dozer around and providing a second set of eyes to the work, ensuring everything is on grade.

Got anything you think Spot might be handy for? Let us now in the comments or on Facebook.