Just like their distant cousin the CTL, track loaders are pretty much all about versatility. And while the relative upstart CTL has quickly become the Swiss army knife of a lot of jobsites, the tried and true track loader takes that versatility to a different level.

The power and size of an actual tractor with swappable tools and the multi-terrain versatility of tracks is a powerful combination making these machines capable of doing just about anything, anywhere.

And with its latest track loader, Cat has made everything good about the 963 even better. There’s more power, an updated cab, increased uptime and several improvements inspired by Cat’s latest dozers.

Check out the video above for all the details.

The new 963 slots right in the middle of Cat’s three-model track loader lineup. The machine in its standard configuration weighs in at 44,881 pounds and the standard equipment general purpose bucket has a capacity of 3.2 cubic yards.

The 963 is powered by Cat’s C7.1 engine, providing 202 horsepower. Notably, this is the same engine in the smaller 953, though on that model, the engine only provides 160 hp. It’s also the same engine inside Cat’s new D5 dozer.

But there are a couple of big advances to point out on this new 963 when it comes to the engine.

First of all, Cat says they’ve squeezed 15 percent more peak torque out of the C7.1 than what was there on the previous model. That additional torque is providing a nice chunk of additional power to the ground when the machine is under load and has sped up cycle times when both digging and dozing.

The 963 pairs this extra engine power with load-sensing hydraulics and position-sensing cylinders for more refined control and giving the machine the ability to better understand what’s being asked of it.

Speaking of response to machine load, in addition to the extra torque, Cat has also managed to enable a reduction in fuel consumption on the 963 through the use of three engine modes.

Cat says you can reduce fuel consumption by up to 10 percent by placing the 963 in Auto Mode. Auto Mode sets engine RPM at 1600 for normal tasks and then automatically increases or decreases engine speed to match the load on the machine at a given time.

Cat has really designed this auto mode for those who’d like to save fuel but don’t feel like moving between engine modes a lot.

For further fuel savings and when you’re in light enough applications that make sense for it, you can drop the machine into Eco Mode which has a wider idle range.

Tools of the Trade

Earlier I mentioned the standard equipment general purpose bucket on the 963 that gives you 3.2 cubic yards of capacity, but obviously Cat is offering a wide variety of buckets, forks and other tools to outfit the 963 with.

Of particular note is the new Performance Series bucket. The performance bucket ups the capacity to 3.7 cubic yards and Cat says the boost in capacity can amount to a 20-percent increase in productivity in some applications.

To get the most out of the tools offered on the 963, you’ll want to be able to quickly switch between tools on the jobsite as applications change and that’s where Cat’s Fusion Quick Coupler comes in.

The fusion coupler allows for in-cab changes between tools in as little as 15 seconds. Plus, you can share Fusion-compatible tools between track loaders like the 963, wheel loaders and other machines.

Speaking of the cab, Cat has upgraded the cab of the 963 to bring comfort and control improvements. Let’s cover controls first because Cat gives you two options.

For the powertrain controls, you can equip the 963 with either the traditional V-lever and pedal steer setup or a joystick steer similar to what’s found on skid steers and compact track loaders.

On the loader controls, you can choose between the traditional two-lever control, or again the joystick control that operates similar to skids and CTLs.

Maybe the most noticeable update to the cab is the new 10-inch touchscreen dash display. The display replaces the gauge cluster found on previous models displaying all of that same gauge information during operation, but it also integrates the view from the standard rearview camera and provides access to implement control settings, return to dig features and the machine’s application profiles, settings, diagnostics and service information.

Cat has also built slope indicate into this display as a standard feature giving you both fore/aft and side slope readings.

The 963 also features the new next generation toggling seat. This seat is extremely adjustable and offers armrest, lumbar and recline adjustments and an active heat/cool feature. Plus, Cat has reduced engine noise for a quieter cab.

The 963 will be available with three different cab trim levels: comfort, deluxe and premium.

Now, we’ve touched on the versatility of track loaders throughout this video and a lot of that is made possible by a track loader’s size, tracks and tools. You can dig, rip, doze, grade, carry and more with these machines.

And that’s obviously useful on a run of the mill earthmoving job, but Cat also produces several other special configurations of the 963 to tailor the machine for specific jobs and jobsites.

First up, there’s a Low Ground Pressure configuration for jobsites with softer underfoot conditions. The 963 LGP has a track shoe width of 31 inches and a ground pressure of 7 pounds per square inch vs. the 9.1 psi found on the standard model.

Then there’s the three Waste Handling configurations Cat offers on the 963.

If the machine will be working on especially mucky or debris-filled terrain, you can opt for the Enhanced Cleaning configuration which outfits the 963 with a wider track gauge for easier cleanout along with the guarding and air handling components.

Wrapping things up on the 963, Cat has also made maintenance updates to increase uptime on the machine, so let’s talk about those.

First up, center hole tracks and the optional reversing fan are both designed to make removal of accumulated debris faster and easier.

Maintenance access and visibility is excellent throughout the machine thanks to wide opening doors and a tilt cab. Plus, Cat has made improvements to the machine’s air and oil filtration and increased the capacity of the implement pump.

The machine is also equipped with remote maintenance features designed to get you back to work faster in the event of needed updates or a problem with the machine.

Remote Troubleshoot lets your dealer connect to the machine remotely to perform diagnostic testing while Remote Flash performs software updates to the machine without a technician present. 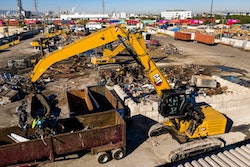