Editor's Note: This story has been updated May 31, 2022, to reflect the first shipment of the dozer to the U.S.

Known primarily in the U.S. for its excavators and wheel loaders, Doosan is entering new territory in construction equipment with its first ever dozers.

Also unusual for the South Korean company is that the new dozers will make their world market debut in the U.S.

Doosan unveiled a “pre-prototype” of the DD100 dozer in December 2021 at the company’s testing grounds near Tucson, Arizona. On May 31, 2022, Doosan announced that its first DD100 has shipped to the U.S. (A video of the dozer in action can be seen at the end of this story.)

Mass production is set to begin in June on the new 10-ton dozer. The dozers are being developed and built in South Korea and shipped to the United States. A 13-metric-ton model, the DD130, is slated for production next year. A pilot version of the dozer will be shipped to the U.S. later this year, Doosan says. Production on the DD130 could begin as soon as February.

“It's something dealers have asked for, to help expand their business and help with their rental fleets,” said Aaron Kleingartner, Doosan product and dealer marketing manager, during a media event in Arizona. “We're excited to see what this particular product category can do for us.”

The DD100 dozer runs on a 122-horsepower Doosan diesel engine that does not use a diesel particulate filter.

The company hopes to capture a portion of the $2.1 billion U.S. dozer market, 45% of which is made up of machines under 140 horsepower, Kleingartner says. The dozer additions will also give Doosan dealers and their customers a “one-stop shop” for their construction equipment needs, he said.

Kleingartner summed up the company's goals for the new dozers:

“We want to make sure we have low maintenance costs, superior power and traction, excellent visibility, and safe and easy operation. Those things are all going to be the requirements for us to be able to provide the opportunity for our customers to make the switch into this new product category.”

The cab, with lots of glass for better visibility, is similar to the company’s new line of excavators and wheel loaders. Controls are also similar. Visibility is further increased by a narrow front engine box, and Doosan hid the air-intake pre-cleaner under the hood so it won’t block the operator’s view.

Other standard features include an 8-inch touchscreen display, rearview camera, front and rear LED lights, and rear side wiper blades. It has keyless entry and push-button start.

The dozer blade is six-angle, variable pitch. The standard blade has a capacity of 2.9 cubic yards, and for the LGP model, 3.4 cubic yards.

The company says mastless 3D machine control and guidance can be installed as an option. The controls are standard electro-hydraulic, and the operator can adjust control speed.

Mooyoung Park, Doosan engineering manager, said Doosan was mindful of the U.S. labor shortage and is designing the dozers to be easy and comfortable to operate. Safety features include a seat with an automatic cut-off sensor, so when the operator stands up, the machine stops.

Other preliminary specs on the DD100 prototype:

Check out the video below to watch the prototype DD100 in action: 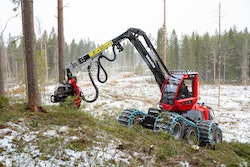 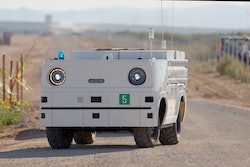 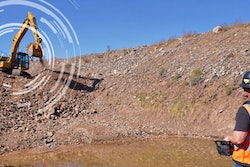