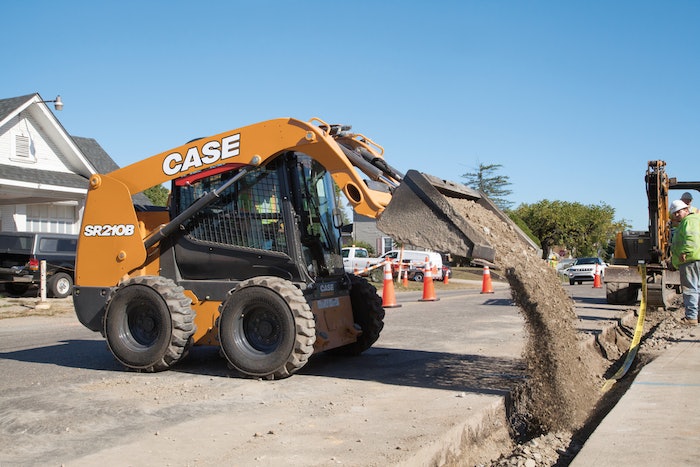 There was a time when skid steers defined the compact equipment market.

At first, these compact machines were pretenders to the throne as kings of compact, but they got bigger, stronger and more capable, and skid steers consistently lost ground, especially to CTLs.

As of last year, that regression seems to be over. Skid steer sales have not fully recovered (and may never do so), but the losses have stopped, and sales have plateaued. This is partly because some compact machines lack a skid steer’s versatility. “Mini excavators aren’t direct competitors because, while they can be prime movers, mostly they’re used for digging and trenching,” says Tyler Zima, senior product specialist, Bobcat. 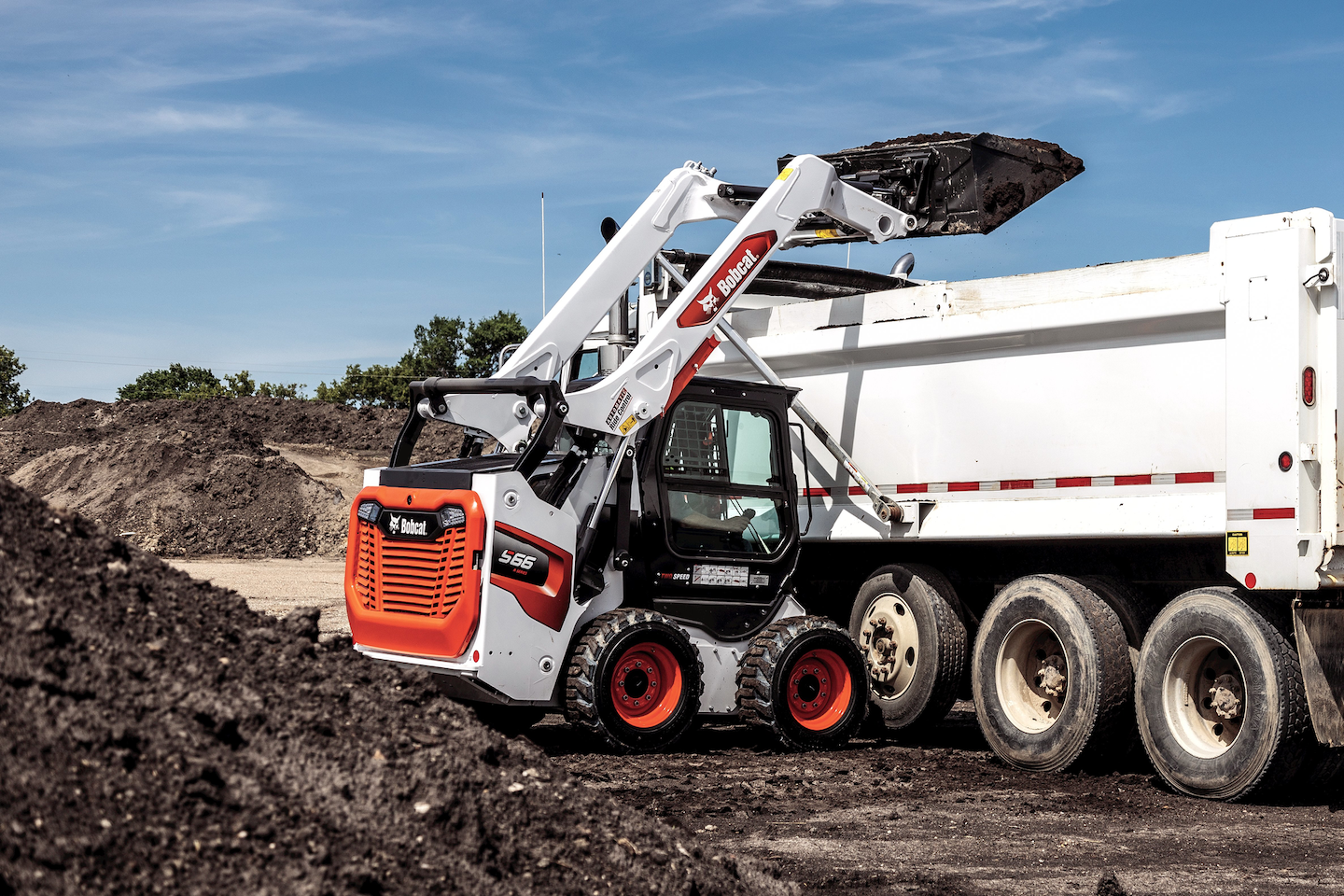 The Bobcat S66 has a 7,154-pound operating weight and 2,400-pound rated operating capacity. Travel speed is 7.4 mph, or 11 mph with optional two-speed drive. System pressure at the quick couplers is 3,500 pounds per square inch. Standard auxiliary flow is 17.6 gallons per minute, with an available 26.9 gpm high-flow option. The engine is rated at 74 horsepower.And what about the skid steers’ strongest competitor, the compact track loader?

“Customers have developed a greater understanding of where tracks have advantages and where tires have advantages,” says George MacIntyre, product manager, Case Construction Equipment. “You are seeing fleet managers and business owners segment their fleets accordingly.”

He confirms the accepted industry wisdom that tires are better on hard and improved surfaces, while tracks are better on turf and other soft surfaces. “There are exceptions and considerations for every application,” says MacIntyre, “but you’re seeing managers become more sophisticated and intelligent in how they integrate both machine styles into their operations.”

From mounting systems to high-flow hydraulics, skid steers and attachments developed in synchrony. But other compact machines also cultivated their attachment appeal.

So have skid steers been forced back to their humble bucket-and-fork role?

Not at all, says Buck Storlie, product line manager at ASV. “The skid steer is still a prime mover. It’s not uncommon to see a skid steer with two or three attachments at a jobsite.”

In fact, greater attachment performance has opened new markets for skid steers. Mulching and forestry are two examples provided by Ryan Anderson, product marketing manager, New Holland Construction. Highly specialized attachments have been added. Anderson cites tree spades and paver layers. The latter can pick up and place a section of pavers, typically 3 feet by 3 feet, using either pressure (like a jersey barrier lift) or suction.

Some OEMs develop and produce their own attachments. Some outsource. Others use a mix. New Holland partners with Stanley for Paladin and other Stanley tools under private label. Kubota partners with Land Pride for more than 40 skid steer attachments tailored to over 15 product categories. 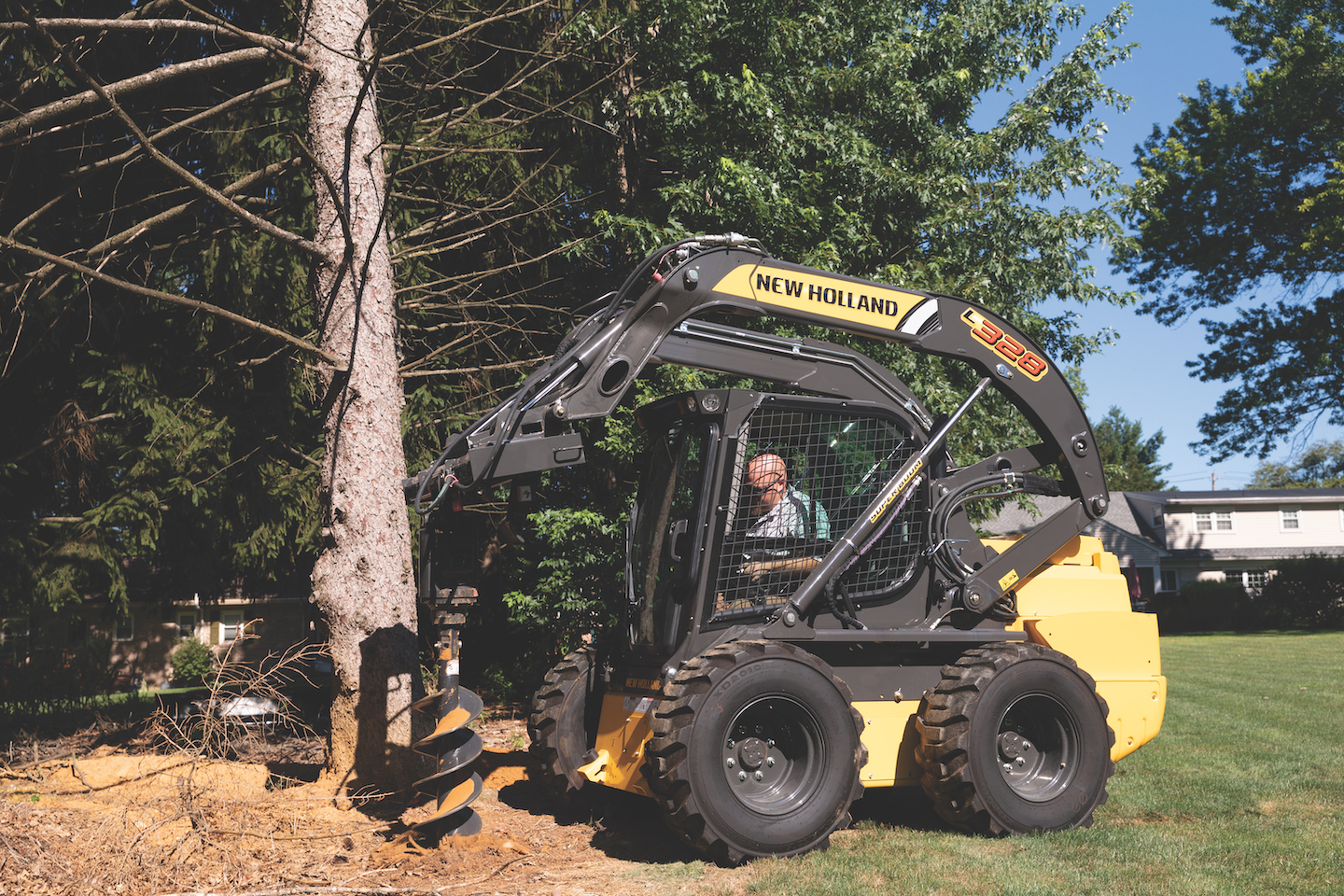 Three key characteristics of skid steers keep them active regardless of what attachments they’re using. Their agile handling makes them well suited to tight spaces. Their high travel speeds enhance lift-and-carry and loading operations. Their light weight allows the skid steer plus several attachments to be trailered together by a typical pickup truck (subject to weight restrictions, of course).

Is a skid steer right for me?

Generally if an application can be done with a skid steer, that will be the most cost-effective approach. 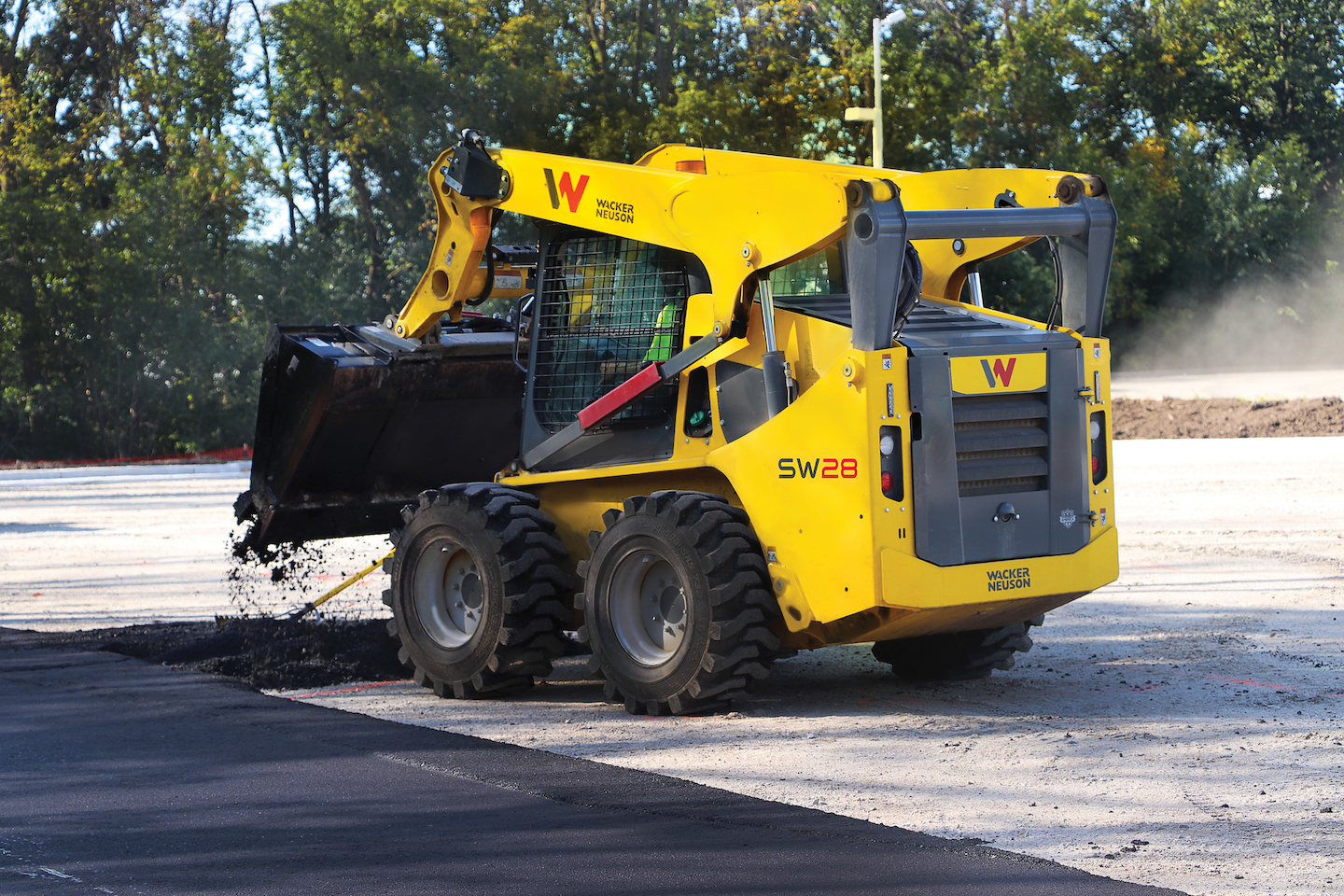 The Wacker Neuson SW28 is powered by a Kohler KDI 3404TCR engine rated at 74 horsepower. Operating weight is 8,175 pounds and ROC is 2,800 pounds. Pressure is 3,500 pounds per square inch; standard flow is 22.1 gallons per minute and high flow is 31.7 gpm. Travel speeds with the standard two-speed transmission are 7.2 mph in low and 12 mph in high. Hinge pin height of this vertical lift machine is 134.8 inches.As noted, they’re faster, more agile and have more pushing traction, especially in snow. The travel-speed gap is being narrowed as faster CTLs emerge. And the snow advantage is also disappearing with the availability of all-season and snow-specific tracks. But skid steers’ agility remains unmatched. On top of that, says Devins, they have better fuel efficiency than compact track loaders.

Greg Zupancic, product manager, compact equipment, John Deere, notes the appeal of skid steers’ lower cost to start-up businesses and other entry-level buyers. “The benefit of lower cost is compounded for those with less than stellar credit, as they will pay higher interest rates but on a lower purchase price.”

The wide range of attachments also helps. First-time buyers can acquire attachments as needed to enter new markets or to perform new services for a market they’re already serving. “A skid steer might be the first acquisition for a customer in a market with rising labor costs or labor shortages,” says Zupancic. “The lower cost of a skid steer makes that transition more doable.”

Zupancic’s advice for existing customers pondering the best way to expand their fleets?

“If your applications favor the benefits of skid steers, such as their speed and maneuverability, that helps. Also evaluate the ratio of work on hard versus soft ground conditions to decide whether wheels or tracks are the best choice.”

What about tracks over tires?

“Think forward,” says Zupancic. “How often do you want to do jobs like this? If it’s one job where the additional cost makes sense, go for it. If you’ll be doing frequent jobs that favor tracks, consider adding a CTL to your fleet or trading in your skid steer for a CTL.”

The factors influencing the decision of whether a skid steer is the right choice can be overwhelming, so Storlie offers this advice:

“Basically it comes down to investment, terrain and application.” 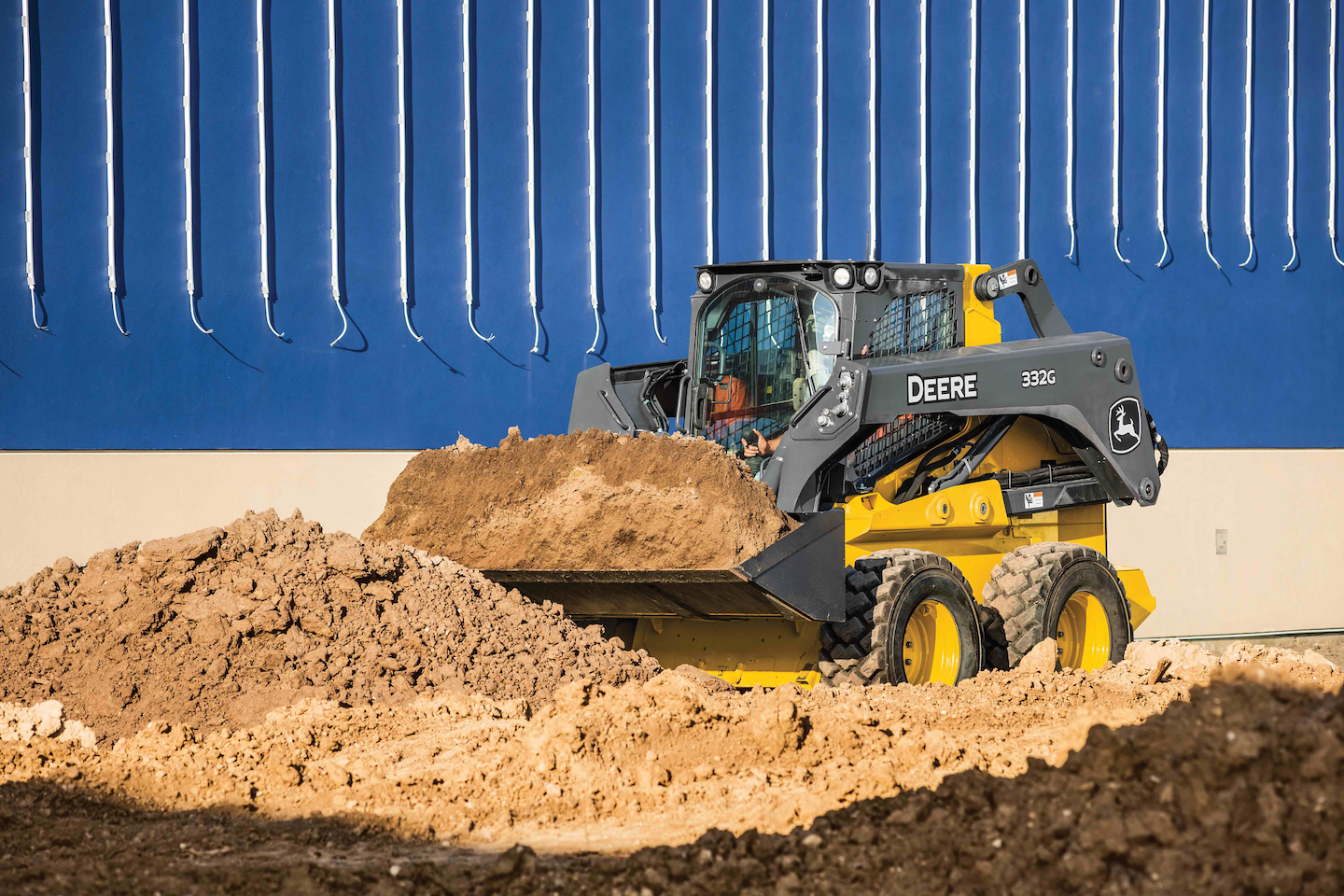 The Deere 332G is powered by a Yanmar turbo, intercooled engine rated at 100 gross horsepower. The universal Quick-Tatch makes changing attachments quick and easy. The vertical lift 332G has a hinge pin height of 132 inches and bucket breakout force of 13,904 pound-feet (foundry model). System pressure is 3,450 pounds per square inch; standard flow is 25 gallons per minute, with optional 41.1 gpm available.The main appeal of skid steers is they support what people get in business to do, says Anderson. “In general, a skid-steer is a money-making machine. Low costs and high productivity make this possible.”

One key to lower overall owner and operator costs is residual value. Skid steers have high utilization rates and tend to be hammered by the time they enter the secondary market, so residual values are low. “Keep them well-maintained and keep excellent maintenance records to offset some of that loss of value,” says Chris Trampush, product manager for skid steers and compact track loaders, JCB. “But also remember that the front-end investment was lower, overall costs are lower, and production rates are generally high. Even with low residuals, skid steers offer real value.”

OEMs aren’t lamenting the realignment in the market from skid steers to other machines; those other machines tend to have higher profit margins for both manufacturers and dealers.

Zupancic notes that Deere has “right-sized” its skid steer lineup from eight models to six by dropping the 312GR and 314G. “They were plain-Jane models with no chance to option up,” he says. “The market they served is well served by our 316GR and 318G.”

Yet manufacturers remain committed to skid steers, despite the drop in sales. Horsepower is up, as Zima noted, and it’s up a lot.

“Compliance with Tier 4 Final standards becomes more challenging at 75 horsepower,” Zima says. “Why would a manufacturer meet those stricter compliance measures with an 80-horsepower machine when the same measures would be required at higher horsepower levels?” Hence the proliferation of skid steers with 90, 100 or even 120 horsepower.

Deere currently offers its Boom Performance Package on only its two largest models, the 330G and 332G, but it will be coming down to smaller models, says Zupancic. Features include boom kick-out, return-to-dig and return-to-carry. “We’ll look at bringing features to skid steers from compact track loaders where they make sense and can contribute value to the skid steer platform.” 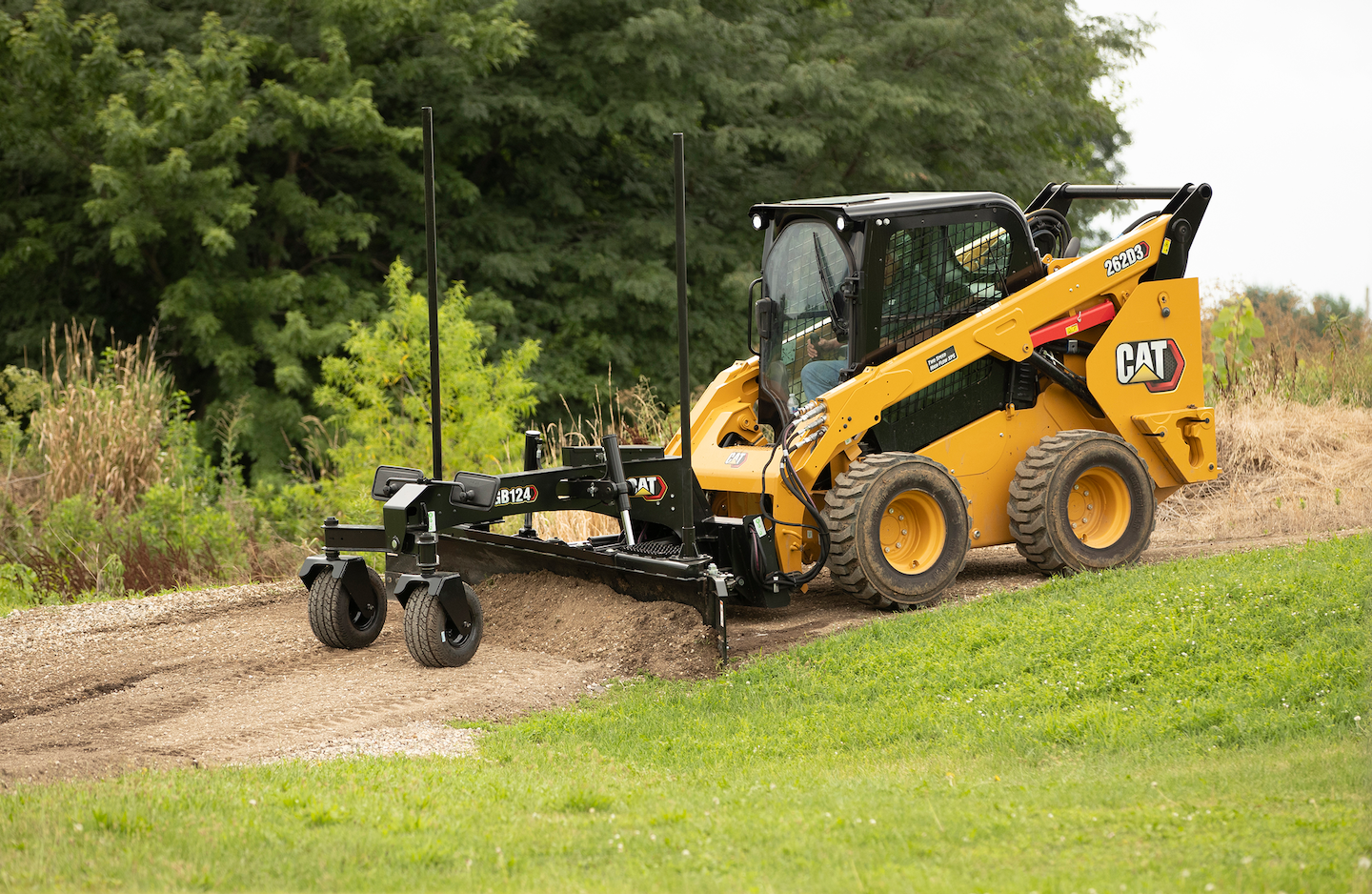 Operating weight of the Cat 262D3 is 8,296 pounds. ROC is 2,700 pounds, or 3,055 pounds with the optional counterweight. Gross power rating for the Cat C3.3B DIT turbo engine is 74.3 horsepower. The redesigned cab provides 15 percent additional space for the operator. Integrated Smart Technology optimizes machine performance for use with Cat Smart attachments, including the Smart grader blade (shown).Kevin Coleman, senior product specialist, Caterpillar, notes that Cat started offering advanced features on its skid steers in 2013. “We were the first to offer a rearview camera; now it’s assimilated into the market.”

Other key features in Cat models for some time include a one-piece, sealed and pressurized cab and a full color display.

More recent additions to Cat skid steers include dual self-leveling, which automatically levels the bucket in both lift and lower motions. This is not standard equipment but is part of a package for most machine configurations. Also in that package are return-to-dig and work tool positioning. The latter is commonly associated with trenchers and similar attachments, “but the work tool positioning feature is helpful even with buckets and forks,” says Coleman.

The skid steer recognizes the Smart attachment, and the monitor and controls are modified to match its requirements. The backhoe provides the dig depth of a 3-ton compact excavator and can use the same compact excavator attachments such as thumbs, plate compactors and augers. The grader blade with assist can be thought of as a moldboard and gives the skid steer grading performance. 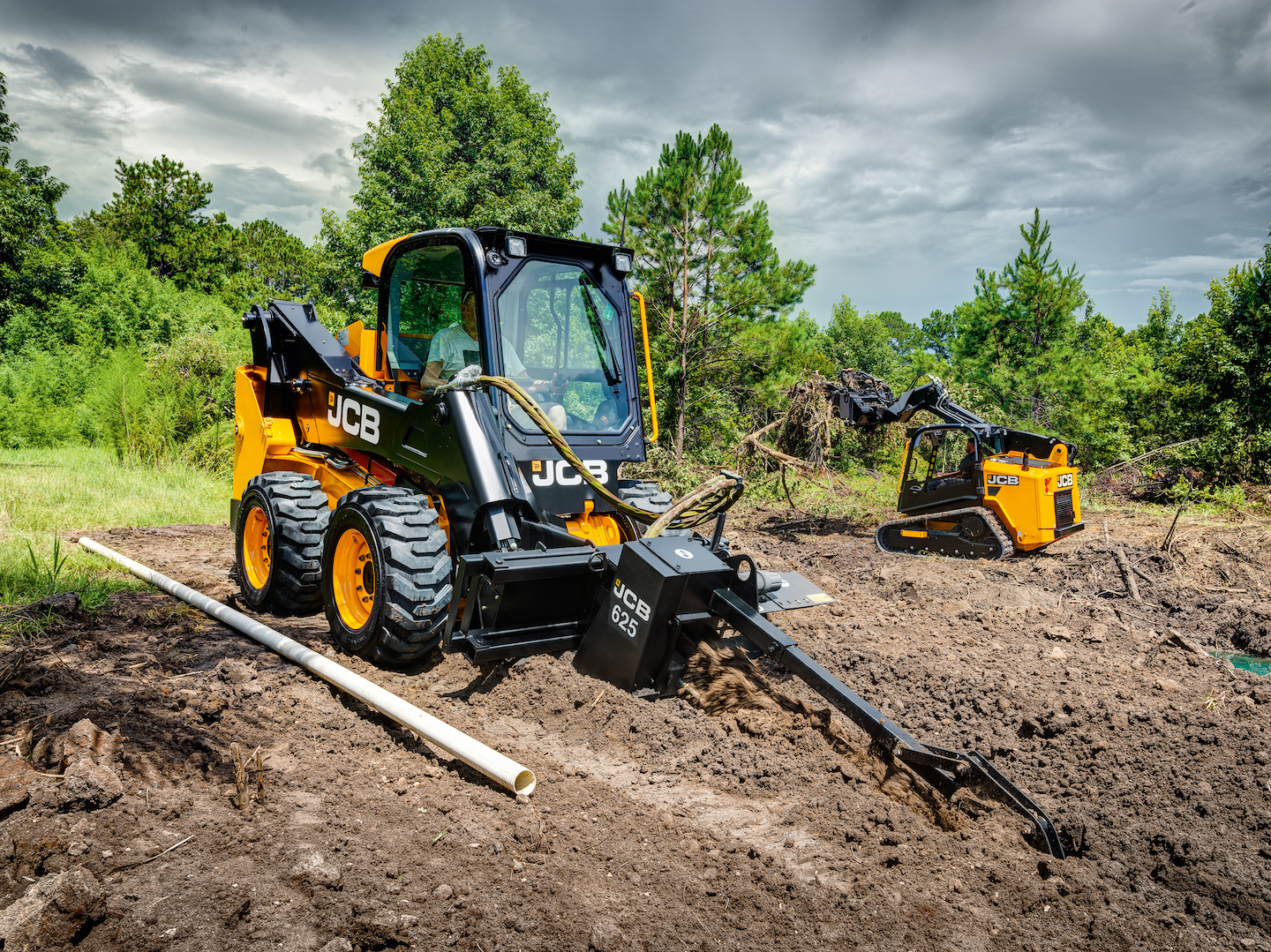 Operating weight of the JCB 270 is 8,680 pounds and ROC is 2,723 pounds. The vertical-lift 270 has JCB Hi-Viz design, providing visibility to the attachment. Features included in the most popular configuration are cab with heat and air conditioning; standard auxiliary hydraulics with two-speed transmission and creep speed; foot throttle; and JCB Smoothride System (SRS).JCB will roll out changes to its skid steers in the second quarter of 2021, says Trampush. LiveLink Lite is now standard and includes a handful of features, including machine locating. The coming LiveLink will be fully featured with a more robust menu of telematics capabilities. In the same time frame will be new radios with Bluetooth and hands-free operation and an optional LED lighting kit.

So yes, the skid steer market has undergone significant adjustment in the past decade or so, and yes, sales have come down considerably. But as the market has leveled off, their future looks bright.

“They will always be a staple in the diet,” says Anderson. “Skid steers will always have a place.” 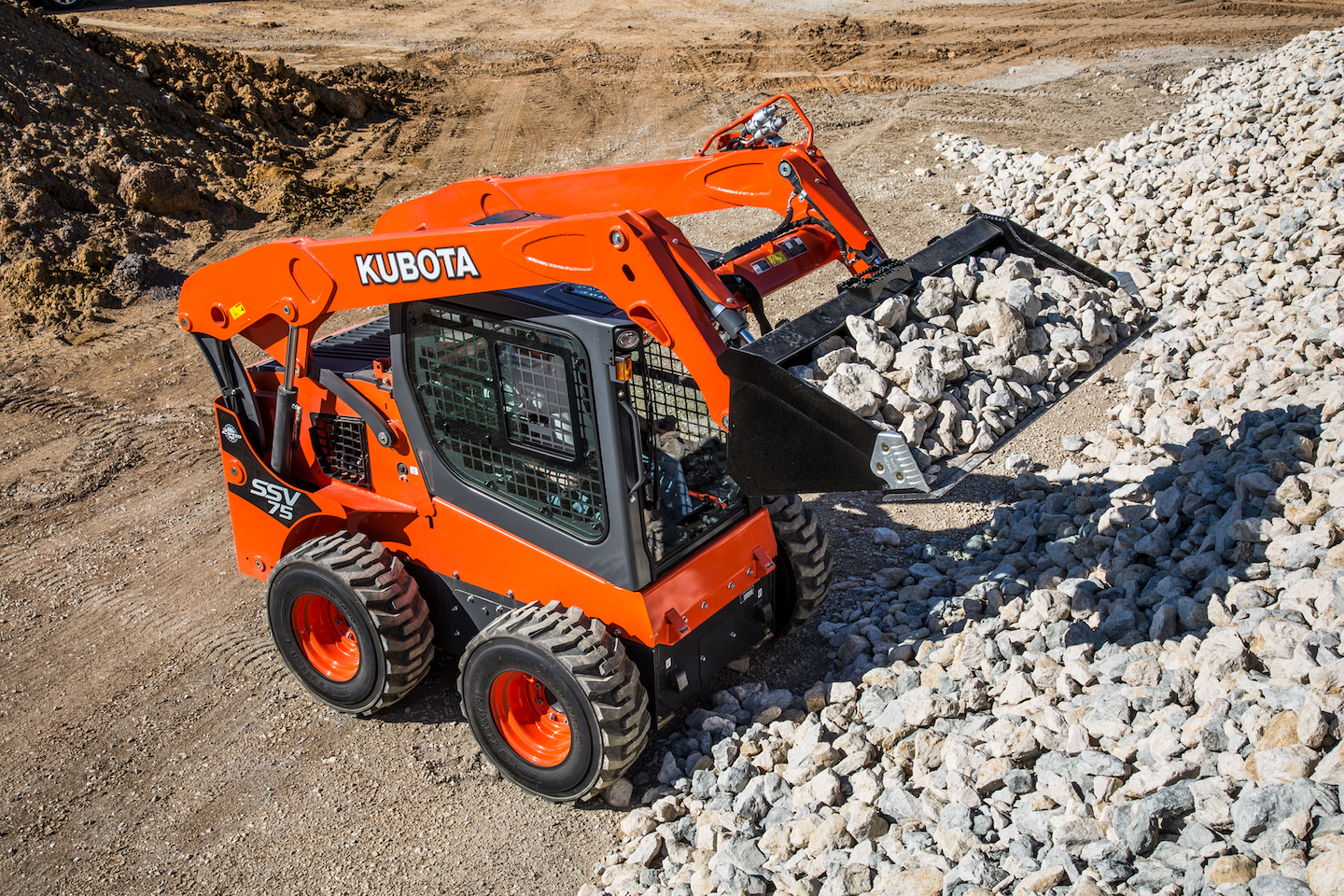 Kubota offers two models of its SSV Series skid steers, the 64-horsepower SSV65 and 74.3-horsepower SSV75 (gross hp ratings). ROCs are 1,950 and 2,690 pounds. Both feature a slide-up, front-entry door for cab entry and exit even when the loader arms or the entire machine is in a difficult position. Other shared features include a dust-resistant, pressurized cab with optimized climate control and an optional multifunction lever for fingertip control of major machine and implement functions.