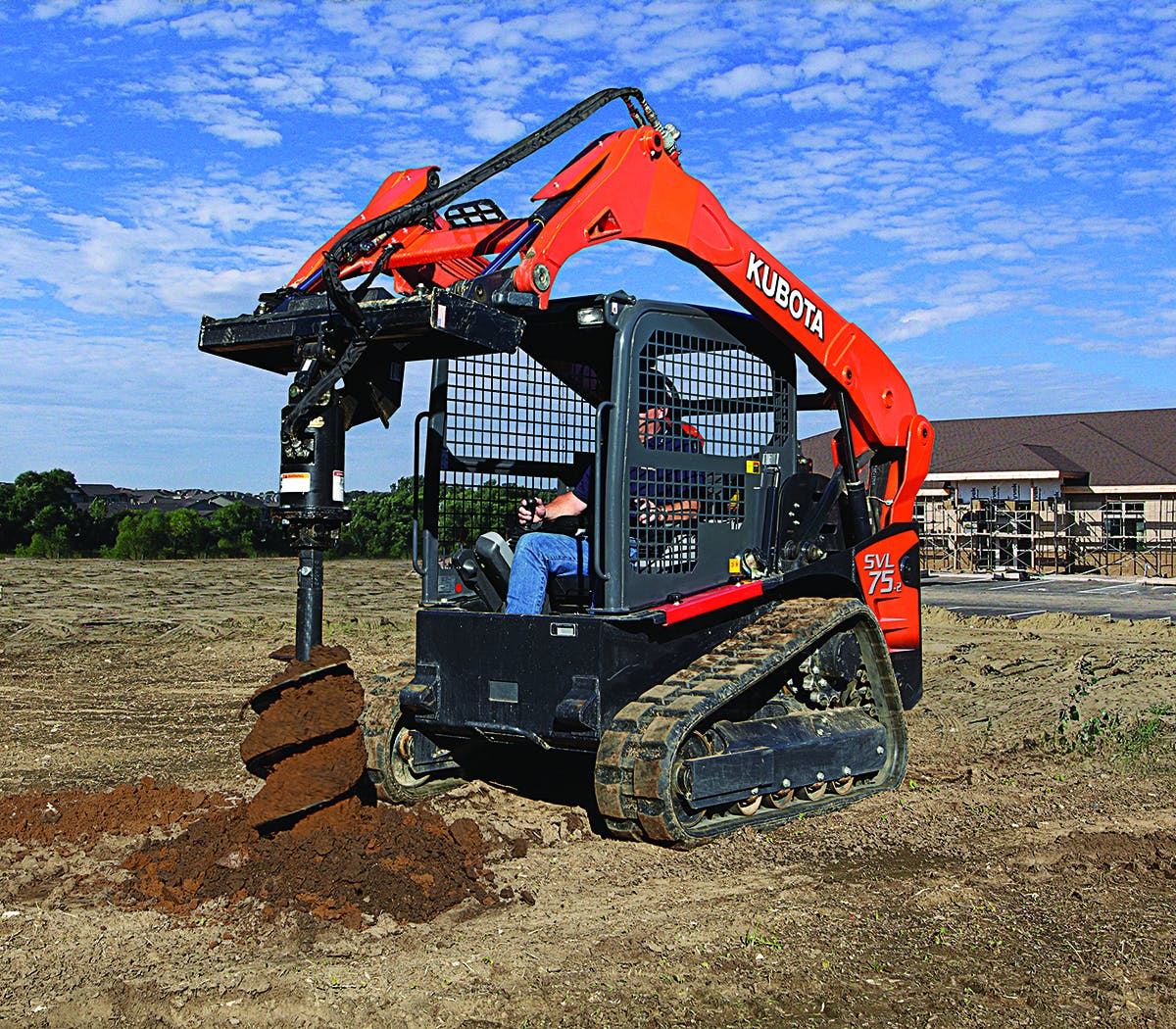 For the first three quarters of 2020, the number of new financed Kubota machines grew 26% compared with last year.

This is great news if you’re a compact equipment manufacturer; for OEMs concentrating on heavier equipment, not so much.

Despite battling the impacts of the pandemic, however, the overall financed market for the machines in this report grew by just over 6% in the first three quarters of 2020. Compact equipment in general is benefiting from 2020’s homebuilding surge.

For this report, we examined the top 10 types of earthmoving construction machines financed in the U.S. Our data comes from EDA, a division of Equipment World’s parent company, Randall-Reilly. EDA tracks data from UCC-1 forms, filed with a state when a machine is financed. Depending on machine type, the financed segment can represent 40 to 70 percent of total machine sales. 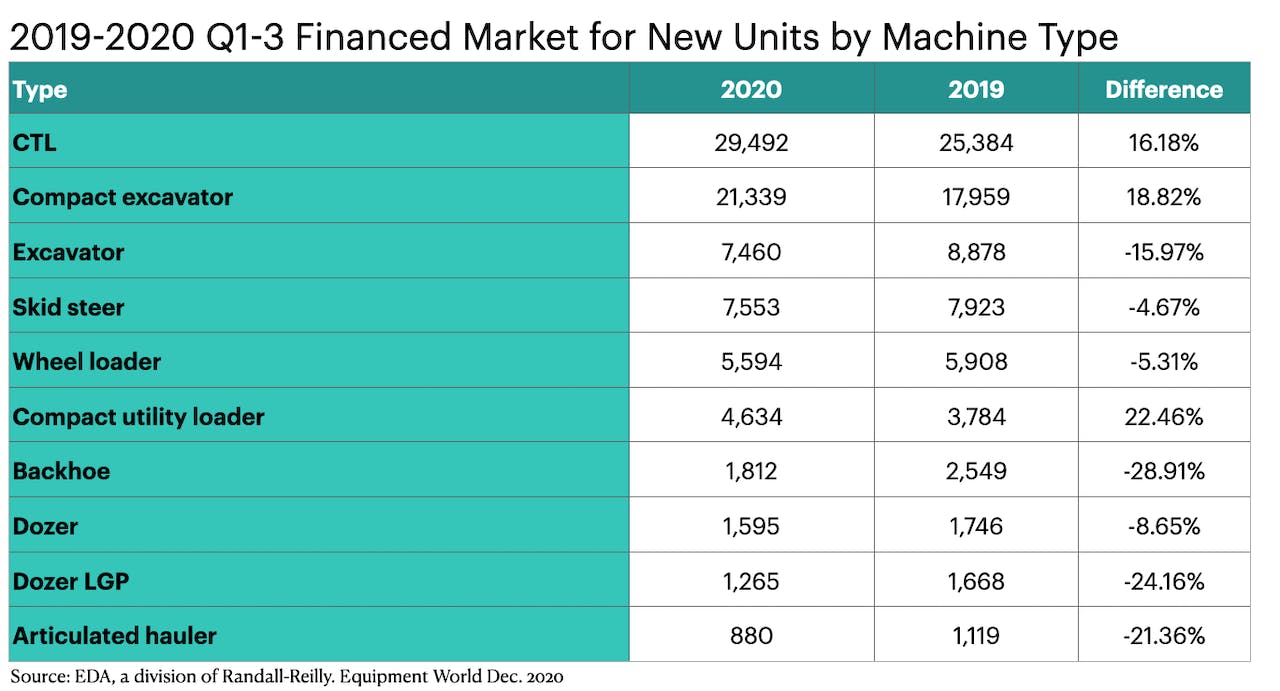 Compact track loaders are continuing their U.S. market domination in terms of number of units financed, with nearly 29,500 units financed for the first three quarters of 2020. Even though Covid-19 is causing some state UCC-1 filing delays, this still represents a 16% increase over the same period in 2019.

When you look at just the top 10 types of earthmoving equipment financed in the U.S. (see chart), CTLs currently make up more than 36% of the market in terms of number of units. 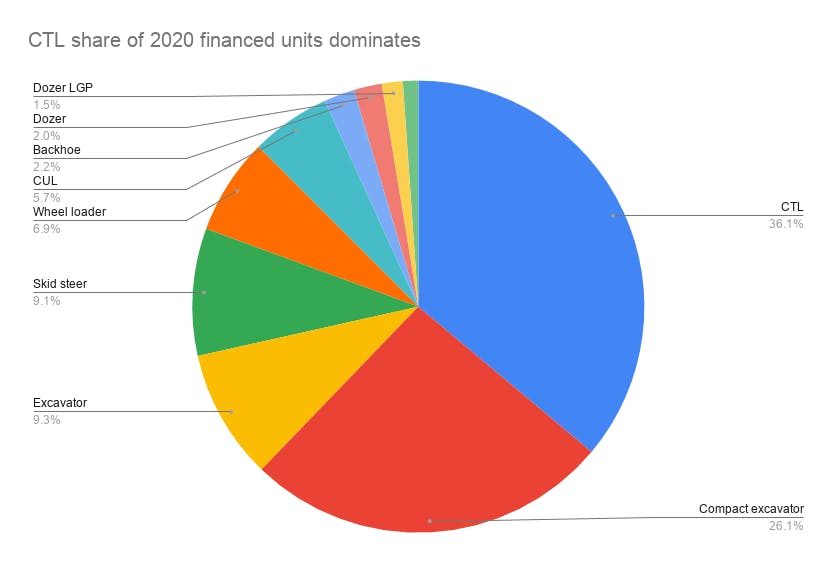 For the first three quarters of 2020, CTLs have continued to dominate in terms of financed units.

Kubota, Cat and Bobcat are in a head-to-head battle over this market, with 24%, 23%  and 22% of the units financed, respectively, in the first three quarters.

Even though they represent less than one-sixth of the CTL market in terms of units financed, compact utility loaders (also known as mini skid steers) saw a whopping 22% growth from year to year, going from nearly 3,784 to 4,634 financed units in the first three quarters. Again, this is with some state filings lagging.

Depending how you slice it, either Bobcat at 35% is the top OEM in this category, or the combined Ditch Witch (27%) and Toro (20%) brands — Toro owns Ditch Witch — are on top. Top models financed were the Bobcat MT85, the Ditch Witch SK800 and the Vermeer S925TX.

Another winner was compact excavators, which saw a nearly 19% growth year over year. For the first three quarters of 2020, Kubota at 27% financed market share is leading Cat at 21%.  Top financed units are the Kubota KX040-4, Deere 35G and Kubota KX057-4.

The only compact machine that didn’t see double-digit growth for the first three quarters was skid steers, down nearly 5% in terms of financed units. Top OEMs were Bobcat (32%), Cat (19%) and Deere (14%). The Kubota SSV75 and Cat 262D3 were the lead models.

On the other side of the construction equipment equation, heavy machines saw significant declines in the first three quarters compared with 2019.

Backhoes, a machine that for many years has seen significant market in-roads from the growth of compact equipment, fell nearly 29% from 2019 levels in terms of financed units.  Deere had 40% of the financed backhoe market in the first three quarters followed by Cat at 36%. Top backhoes models were the Deere 310SL, Cat 420F 2 and Case 580 Super N.

Top OEMs and models in terms of financed units for these machine types were: 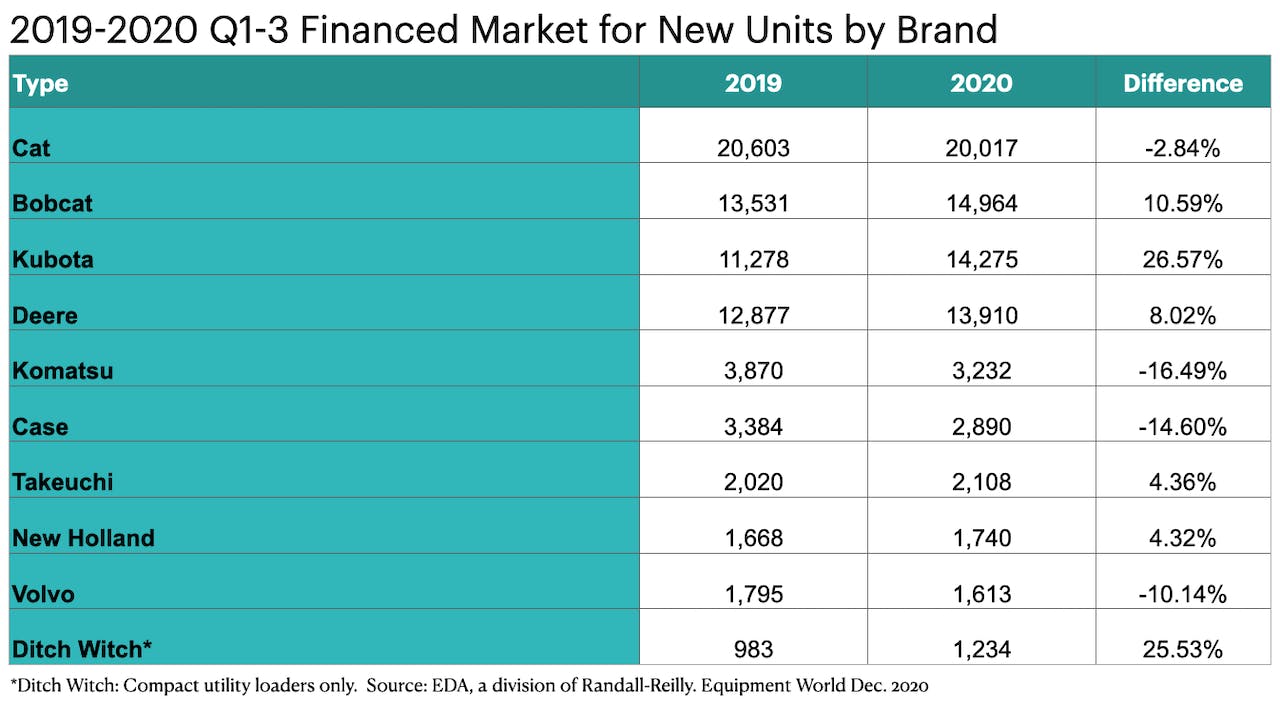 It’s good to be Kubota right now. The manufacturer of CTLs, skid steers, utility tractors and lawn equipment saw a 27% increase in the number of earthmoving models financed in the first three quarters of 2020.

And the company just entered the white-hot CUL market with its SCL1000 model, which is generating market excitement. Comments to the Equipment World video on the SCL1000 have people saying “this machine is hard to ignore” and others complaining about the wait to get one delivered. One commenter said he gave up waiting: “With growing frustration over the delayed launch, I finally went with a Ditch Witch SL800.”

Speaking of Ditch Witch, its presence on the top financed manufacturer chart is solely because of its SK Series CUL line. The company saw a 26% financed unit growth in the first three quarters of this year compared with the same period in 2019.

Bobcat has also seen solid growth; it posted an 11% increase during the first three quarters in the number of financed top machines year to year. Two other compact-centric OEMs, Takeuchi and New Holland, saw 4% growth.

Mixed and down for heavy OEMs

Results were mixed for manufacturers with extensive offerings in both compact and heavy machines. Deere posted an 8% uptick in the number of financed units sold. The news was not so good for Case (down 15%) or Cat (down 3%).

In terms of financed units sold in the first three quarters, Kubota overtook Deere for the No. 3 position, and is knocking at Bobcat’s door for the No. 2 position. New Holland is now in the No. 8 position, overtaking Volvo, which was in that position last year and is now No. 9. 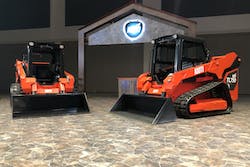 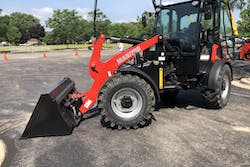 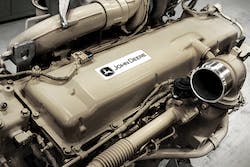 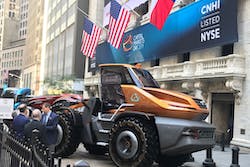