Articulated trucks aren’t the first thing that come to mind when considering technological advancements in construction equipment, but there’s no doubt they’re getting smarter.

One goal of this technology is “to remove the guesswork while leaving the operator in control,” says Cory Brant, solutions marketing manager, John Deere.

This technology goes way beyond onboard weighing and tracking, says Scott Thomas, Cat product application specialist. “The repetitive nature of the work done by these trucks makes them ideal candidates for having multiple automated functions,” he says.

Brant cites the three operating modes of Deere’s new 410E-II and 460E-II artics as an example of ways the company is assisting operators with advanced technology:

Normal mode enables the new E-II machines to perform similarly to their predecessors, the E Series trucks, but with improved fuel economy.

Eco mode “just smooths out the machine” in shifting, acceleration, braking and other operations. It’s what a highly skilled operator would do in seeking maximum fuel efficiency, but Eco mode does it automatically, all day, every day.

Traction mode takes the guesswork out of the auto-differential lock and matches engine speed and shift points to conditions.

Deere also simplified greasing on the 410E-II and 460E-II. A bank of easily accessible zerks has lines running to the lube points. Auto-lube is a factory option; it retains the ability to manually service grease points.

Komatsu Traction Control System monitors both travel speed and individual wheel speed. When slippage is detected, it engages the interaxle lock. If additional control is needed, the system applies the brakes individually to the slipping wheels and sends power to the wheels that have traction.

Volvo ADTs have Haul Assist, which includes onboard weighing, as do many ADTs. But it also works within the Volvo Co-Pilot architecture to deliver additional information.

Co-Pilot stores site information and can show how much of a specific material was brought to each dump site. It can monitor production against target values for each project. Simple graphics display tons per hour, tons per unit of fuel, percent of truck utilization and amount of carryback.

A site map shows load and dump zones, areas with special considerations (reduced speed limits, narrow roads, etc.) and the proximity of other trucks on site that are also equipped with Co-Pilot.

“Because Co-Pilot offers standard features in all applications, operators of other Co-Pilot-equipped machines find the system familiar and intuitive as they move from one type of equipment to another,” says Rob Palermo, product manager, articulated haulers, Volvo.

Effective with the 2021 models, all Bell articulated trucks come configured for a pedestrian detection system (PDS).

Bell provides the interface and electronically controlled brake valve required for PDS. Only suppliers that have successfully tested their PDS interface with Bell can install the equipment on these trucks. If PDS detects a safety threat, including a nearby person, it signals the truck, and the truck applies the brakes.

“The old calibration was called ‘table-based’ shifting,” says Robin Pett, product manager, Bell Equipment North America. “This had a set engine rpm at which a shift would occur. The new FuelSense calibration generally shifts at a lower engine rpm for better fuel efficiency when conditions allow but will hold a gear until a higher engine speed is attained as required by conditions.”

There is no transmission retarder in the B30E. Instead, it has a brake retarder using the service brakes, which are on only the front and middle axles. The brake retarder pulls the wet disc-brake pads near the rotors but stops short of actual contact. Oil shear between the pads and discs provides the retarder effect. The middle and rear axles are connected so that braking of the middle axle transmits braking force to the rear axle wheels. Brakes have been upgraded to eight plates and supply significantly greater braking force than did the former six-plate wet disc brakes. An engine brake engages automatically whenever the operator’s foot is lifted from the accelerator pedal.

The TA300 from Terex Trucks is now equipped with an EP320 transmission with eight forward and four reverse gears. This provides a higher overall gear ratio spread, equal-ratio steps between gears and optimized shifting with partial loads. The EP320 contributes to the TA300 seeing a 5 percent improvement in fuel efficiency over the previous model.

Top speed is increased by 3.1 mph to 34 mph. The EP320 transmission-fluid maintenance interval is extended to 4,000 hours. The main hydraulic reservoir, equipped with magnetic suction filters and high-performance oil, also has extended service intervals of up to 4,000 hours.

The TA400 has the latest drop-box design for higher levels of performance and durability. An electronically activated engine-exhaust brake and six-stage modulating transmission retarder support the force-cooled disc brakes, extending their life. The Allison HD4500 on the TA400 has fluid maintenance intervals of up to 6,000 hours. As with the TA300, hydraulic fluid maintenance is scheduled for 4,000 hours.

Doosan uses a new front suspension on its DA30-5 and DA45-5, replacing shock absorbers and rubber springs with a hydro-gas, self-leveling system.

Ride quality and operator comfort are improved, especially when the truck is empty. The hydro-gas cylinders connect to pressure accumulators. The pressure in the cylinders can be adjusted to change ride characteristics and to lower the height of the truck for easier transport. A front-mounted turning ring gives better left-to-right weight distribution when turning.

Newly redesigned cabs on the Doosan DA30-5 and DA45-5 sport more than a dozen new features for improved ergonomics and comfort. Bigger gauges are easier to read. User-friendly graphics and icons can be controlled by buttons on the display panel. That panel can now show multiple camera views.

“Some of our customers add a second camera to get a view of the truck’s body to better monitor the payload,” says Aaron Kleingartner, product and dealer marketing manager, Doosan Infracore North America. “The second camera, when used in conjunction with our payload measuring system, can help operators determine when the payload is near its proper level.” Payload tracking is now standard on both Doosan ADTs.

The 725 is the last of Cat’s ADTs to get the company’s new cab and other new features.

Traction control is fully automatic. It is integrated with the steering system and senses when steering is active. This allows the truck to turn while still engaging the diff locks.

The automatic retarder turns off when the operator applies the throttle. While bigger Cat ADTs have engine retarders, the 725 relies on a hydraulic retarder bolstered by the service brakes when needed.

The combined transmission-hoist lever on the Cat 725 gives operators access to multiple functions.

In drive, that same button serves as a transmission hold. In the biggest models – the 740 EJ, 740 GC and 745 – it is the shifter for the two-speed reverse.

The second yellow button on the lever is a speed limiter, which sets a maximum top speed for the truck. Fingertip control is used to dump (or eject on EJ models).

If the truck is stopped or going less than 2 mph, Cat’s new Assisted Hoisting Control will shift to neutral, engage the service brakes, apply the wait brake, raise engine rpm and raise the dump body. Lowering the body is also an automated sequence, all done by pushing the control button past its detent, just like fully raising or lowering a power window in a vehicle. 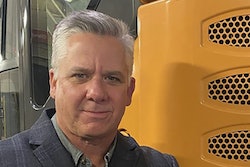 Dolan returns to Case CE as head of sales and marketing 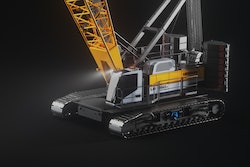 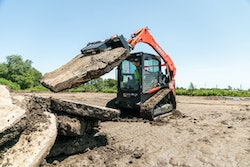