The G4 has a variable pin center design so operators can easily pick up and switch a range of attachments from various manufacturers without having to leave the cab. The coupler can also reverse buckets for excavating against walls and under pipes, the company says.

For safety, the coupler features front and rear locks that are activated by springs. The front safety lock retains the attachment in case of misconnection. The rear lock is a secondary safety feature backed up by two springs and will retain the attachment’s rear pin in case of cylinder failure. A patented curl-to-release control system “guarantees the attachment is only released in a safe position,” the company says.

“The front lock is automatically hydraulically powered-on the whole time,” said Gerry Kealy, Geith sales manager, at the company’s booth at ConExpo 2020. “These two springs exert 5 tons of pressure on the engaging plate, which goes to the back end.”

Kealy says the multiple-lock system has been adopted in Europe following fatal accidents with buckets falling off but has not had widespread adoption in the United States.

“People are used to using quick couplers that their grandfather had, and they’ve got a bunch of buckets designed for a specific coupler and they don’t want to have to change those buckets and have to retrofit it,” he said. “But the couplers are not safe.”

Geith says its coupler can save 25 percent of total machine hours compared to a direct mount, and its compact design delivers improved tip radius for increased breakout force.

A multi-pin system enables the operator to pick up attachments with different pin diameters. The coupler does not require greasing and has few replacement parts. It is made of high-strength steel. 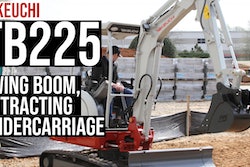 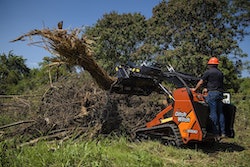 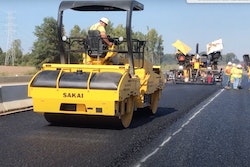 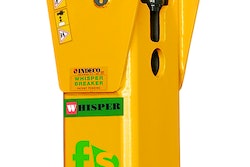