In preparation for new standards for aerial lifts that take effect in December, Genie has unveiled two new scissor lift models for the U.S. market, along with upgrades to its full line of GS slab scissors.

During a press event September 17 at its headquarters in Redmond, Washington, the company announced that it will add the new 46-foot GS-4655 to its slab scissor lineup for the global market, including North America. And it will introduce to North America the 19-foot GS-1932, a model that has been on the European market.

The new and updated models in the GS series meet ANSI standards that will require scissor lifts to be rated for indoor and outdoor use to account for wind safety, and to have load-sensing technology to prevent platform overload. The standards also call for changes to the platform rails and for other safety features. Machines built before that date do not have to meet the new standards.

ANSI compliance was not the only thing on Genie engineers’ minds when developing the next generation of slab scissor lifts. The company also added such features as an AC electric-drive system instead of a hydraulic drive motor to the GS-4655 and introduced a variety of optional accessories to assist workers on the platform.

The new GS-4655 has a platform capacity of 770 pounds, is 55 inches wide and is designed for heavy- and light-duty construction, as well as for narrow-aisle warehouse tasks, electrical installation and facilities maintenance, the company says.

Genie touts the GS-1932 as a lighter alternative to its GS-1930, which will also be updated for ANSI compliance. The electric GS-1932 weighs in at just under 3,000 pounds and can go where heavier lifts would be restricted by weight. It is also 2 inches wider than the GS-1930, at 32 inches, and has a platform capacity of 500 pounds. It is designed for maneuvering in tight spaces. 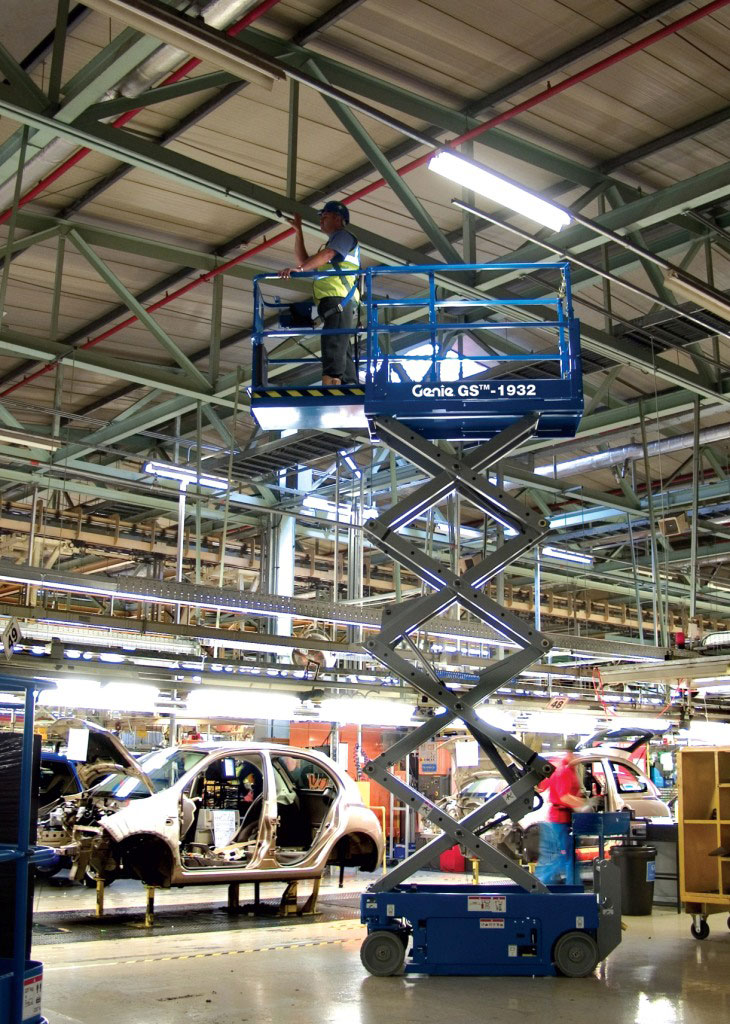 Currently, scissor lifts in the United States do not have to be rated for indoor/outdoor use, but under the new ANSI standards, manufacturers must account for wind up to 28 mph for outdoor use and limit platform height accordingly.

In complying with the standards, Genie decided to design its scissors for both indoor and outdoor use by allowing operators to simply push a button to change modes.

For the GS-1932, indoor mode allows a platform height of 19 feet, while outdoor mode reduces max height to 14 feet 8 inches.

The switch to indoor or outdoor mode can be made with the push of a button on the platform controls or at the ground controls. If the operator does not select a mode, the lift automatically operates in outdoor mode. The indoor/outdoor mode switch can also be made while the platform is elevated. Another big change for scissor lifts under the standards is load-sensing technology that automatically cuts off machine operations when the platform capacity is exceeded. Genie uses sensors to constantly monitor platform load, and when exceeded, visual and audible alerts are triggered and machine motion stops until weight is reduced.

Another change in the platform focuses on the guardrails, which must be increased to 3 feet 7 inches high. To accommodate the change, Genie switched from standard rails to folding guardrails on all its GS scissors, except the GS-1330m, which because of its size does not require the elevated rails. The black and yellow tape on this Genie GS-4655 indicates that it is ANSI-compliant. Such tape on the platform is required under the new ANSI standards to show which machines are compliant. Lifts built before the standards take effect are grandfathered in to the current standards.

To meet the new ANSI standards, GS scissors will also be equipped with toe boards on all platform entrances and standard swing gates instead of a chain link at platform openings.

The GS-4655 will come with a 4-foot rollout extension deck, and it has full-drive capabilities at its max 46-foot platform height.

Other platform features for the GS-4655 include diamond plate flooring for a durable gripping surface and a link stack centered under the platform for operator stability and comfort. For the GS-4655, Genie replaced the hydraulic drive motors with an AC electric-drive system that the company says has “go anywhere capabilities.” The front-wheel electric-drive motors are sealed to prevent damage on harsh jobsites.

The lift can climb up to a 25 percent grade and has a 14-degree breakover angle to prevent bottoming out when climbing truck ramps for transporting, Genie says. Side forklift pockets have also been included on the chassis to aid transport.

Accessories for the platform 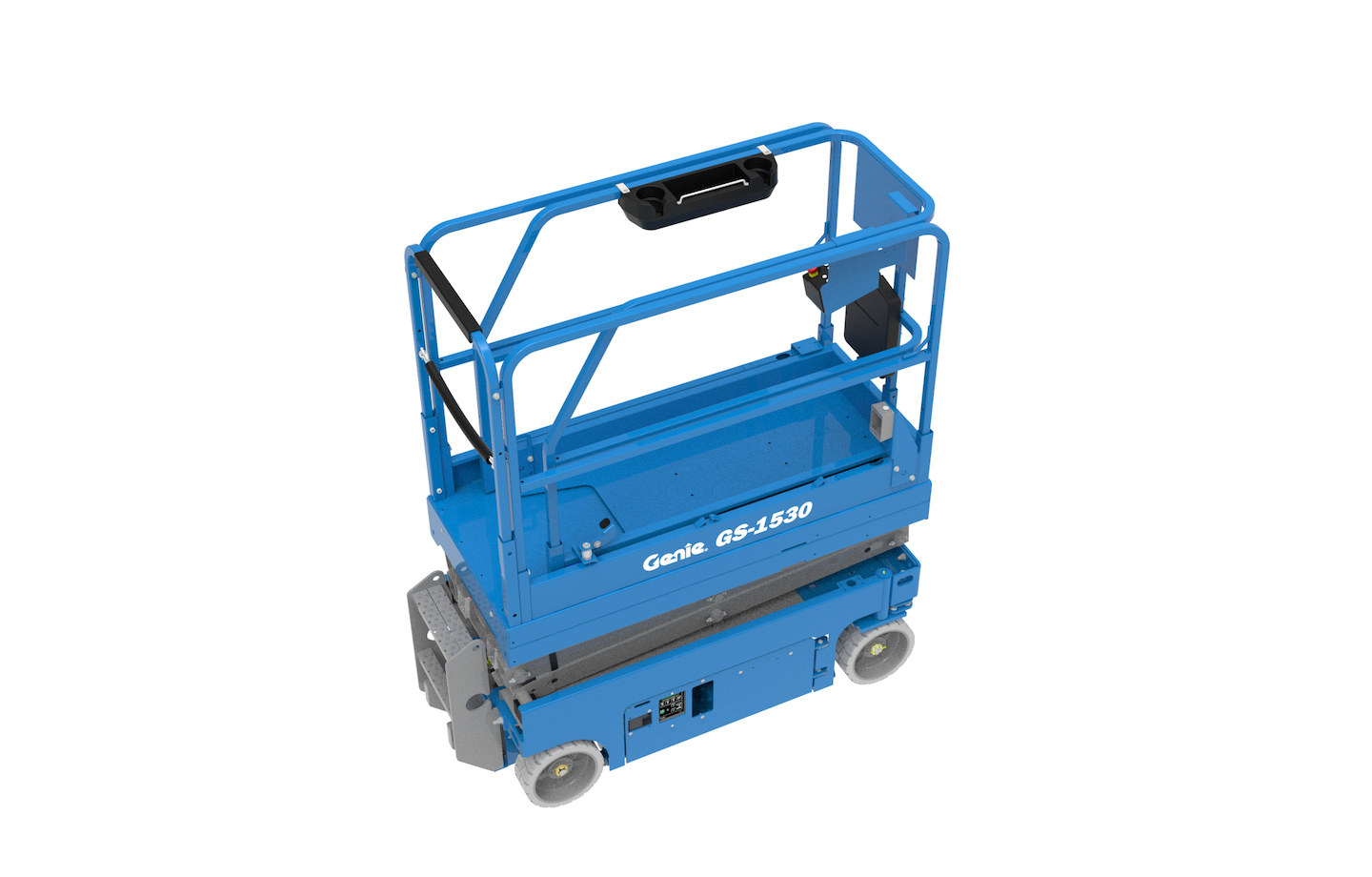 Genie has launched three new ANSI-compliant accessories to go with its new and updated GS models. The Genie Lift Tools accessories are all designed for easy installation and are as follows:

The accessories and new and updated GS scissor lifts will be available later this year in North America, Genie says.