Selecting the right motor grader for building a road depends upon a variety of factors.

“In general, it really comes down to the job size, the material, the ground conditions, the ground pressure, the price point for the customers,” says Luke Kurth, John Deere product marketing manager, motor graders.

“It’s a very regional thing. Every customer, every area has their popular sizes in what they’re looking for and the room they have to work with.”

But when it comes to moving lots of dirt for a major road job, power and torque are at the forefront, he says.

The machine also has to be able to achieve high accuracy to meet DOT standards for the finished grade. And as more veteran operators retire and less experienced operators fill their seats, motor graders with advanced machine control and automation features begin to become more popular. Motor grader manufacturers have understood the challenge of simplifying a complicated machine for years and continue to make headway toward helping younger operators get up to speed.

“All of these technologies and advancements have been able to help the operators get more proficient,” says Eric Kohout, Caterpillar product application specialist. “They still obviously need to understand material management and where to move the material, but there are technologies to get them up to speed faster.”

The manufacturers have also been keeping an eye toward veteran operators who want the same types of controls they’re used to, but also appreciate the new technologies that are improving comfort and accuracy.

“Some of these advancements have helped operators who are considering retiring maybe extending their tenure as an operator a little bit longer,” Kohout says.

The advancements include automatic grade and slope control and auto-articulation, along with lower-tech upgrades, like improved visibility, convenient controls and increased comfort. John Deere recently upped the ante in technology with the industry’s first mastless grade-control system for motor graders, called SmartGrade.

Manufacturers say more such advancements are on the way.

With all the choices available to road contractors and the changes that continue to be made, we asked manufacturers to highlight their current top all-around roadbuilding motor grader. 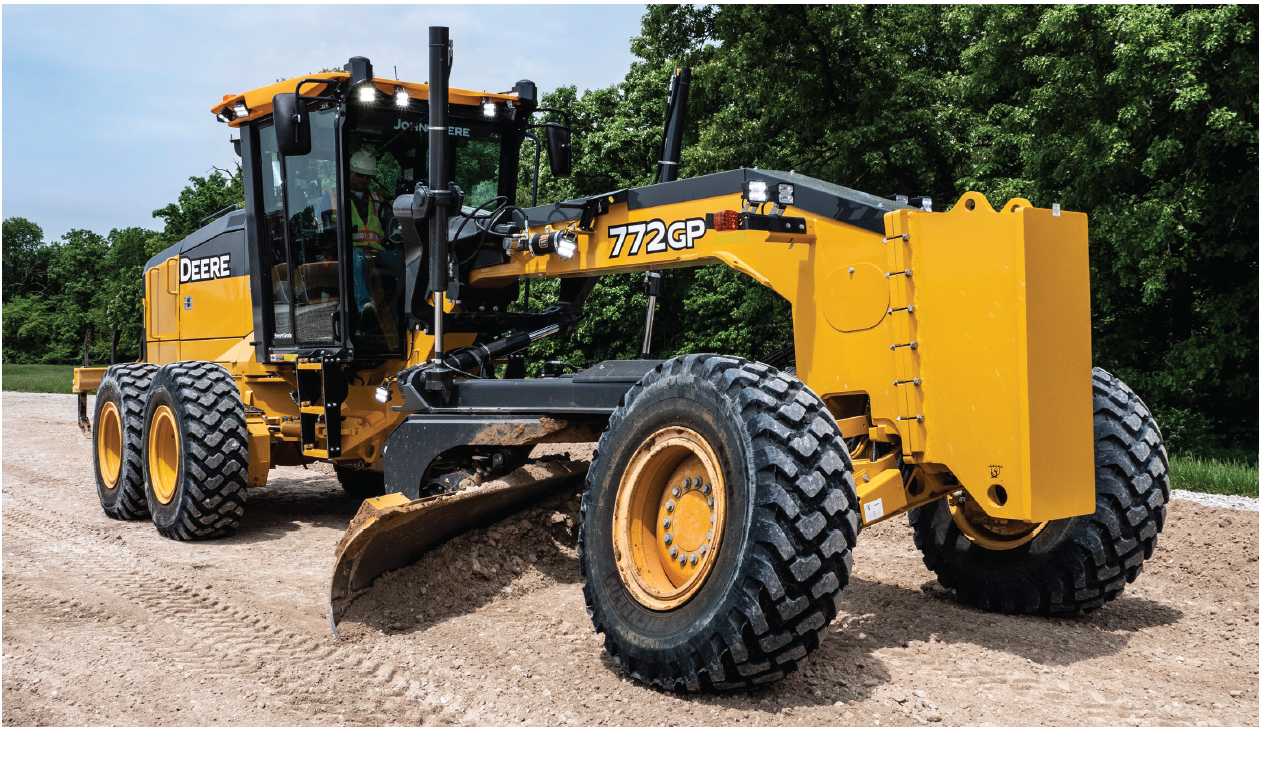 When combining SmartGrade with Deere’s 772GP motor grader – at 44,570 pounds and 275 horsepower – the operator not only has power and torque for moving lots of dirt, but precision when laying the grade.

SmartGrade means contractors no longer have to set up a masted machine control system and dismantle it each day. There’s also no more worrying about damaging the cables and mast when getting near trees and brush. The grade-control system is integrated into the grader at the factory and comes calibrated and ready to run when it gets to the jobsite, Kurth says.

“Now you’ve got a machine that you can use top to bottom on that jobsite,” he says, including site clearing. “You can do it all without having to mess with masts or coil cables. Now you are just hitting a button.”

The new system allows more than just the convenience of going mastless. Kurth explains that it allows the operator to harness the motor grader’s full potential.

“Now the grader is the captain of the jobsite,” he says. “They’re the one in charge, and everyone will match that grade, so I know I’m never undercutting or leaving too much behind. We have now pushed the boundaries of what a grader is capable of doing.”

Deere has also added automation into the mix to make it easier for less experienced operators to get up to speed and to help veteran operators focus more on production and efficiency.

Such automated features include auto articulation, in which the back of the machine follows the front wheels; and automatic cross slope, which holds a consistent slope with a single lever.

Kurth says SmartGrade will also pave the way for future motor grader automation to make the machines easier to use.

“We’re changing the way people expect the machines to perform,” he says. “They don’t have to work as hard as they did to get to grade, and this is just one major step forward in that direction.” 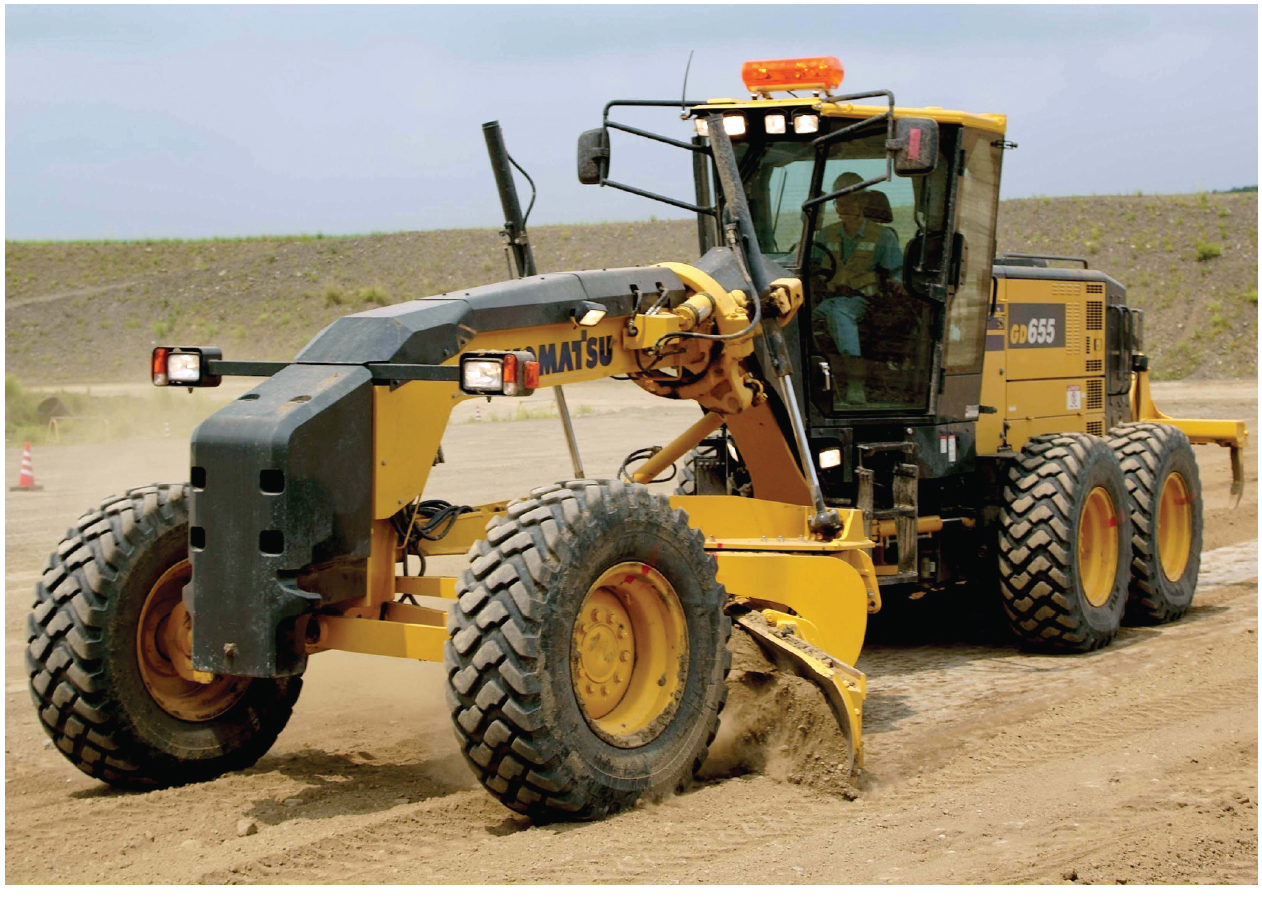 Komatsu’s new GD655-7 motor grader features a hexagonal cab for increased visibility. The cab viewing area has a narrower center section and then two large, clear doors on the sides that the operator can see through.

“There are no cab posts in your way, so you can see down to the moldboard and make proactive adjustments,” Boebel says. “You can also see immovable objects so you can avoid them, such as posts or curbs. It provides excellent awareness of the jobsite around you.”

Komatsu also added electronic controls that are situated back toward the seat in a more relaxed position for the operator, instead of the upfront, traditional antler rack configuration. The company also split the 10-section hydraulic control valves into two, five-valve sections to further improve visibility.

Linking to 3D grade control is simpler, too, no longer requiring an aftermarket valve to plug into the system. “The cab is prewired,” Boebel explains. “You just plug in to it with the grade-control system, mount your components on existing provision mounts, calibrate, and you’re ready to go.” The new Topcon GX55 monitor is part of the machine-control kit for the GD655-7.

The GD655-7 also comes with a dual-mode, torque-converter transmission, which keeps the grader from stalling when you’re spreading a heavy load. “So you’re able to power through those big loads and spread that material out,” he says. “If you had to stop, you’d have to back up and start over again – that’s less productive.” The transmission also boosts fuel economy while maintaining power. The 38,140-pound motor grader runs on a 218-horsepower engine.

Komatsu also made the cab quieter and loaded it with standard comfort features, such as power raise and lower for the left-hand and right-hand consoles, multiposition adjustable armrests, air-suspension seat, rearview monitoring camera, AM/FM radio and auxiliary input jack. 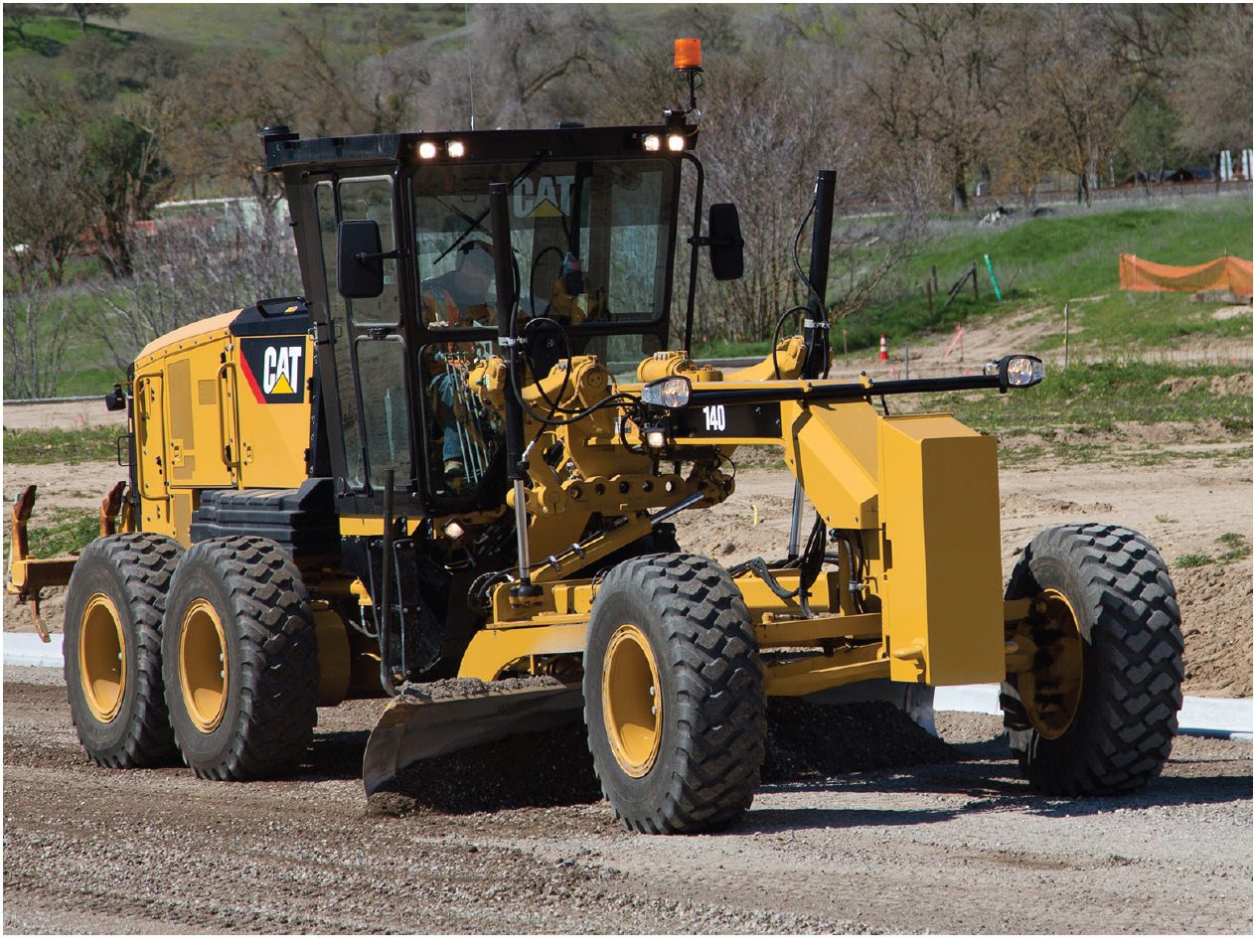 When it comes to a general, all around motor grader for roadbuilding, from greenfield work to finish grade, Kohout recommends the company’s 140 or 140M3.

One of the main differences between the two models are the control systems, with the 140 having a steering wheel and levers, and the 140M3 equipped with joysticks.

The joystick-controlled 140M3 includes auto-articulation. Cat added a Stable Blade option for both graders, which detects when the machine will bounce and assists in preventing it from occurring.

“These technologies are available for both novice operators to help the company get them up to speed faster, as well as for seasoned operators” to reduce fatigue, he says.

Cat integrates its Cat Grade with Cross Slope at the factory, which has auto-control on one side of the blade with the operator controlling the other side. The motor graders can also be equipped with 3D grade and slope control through third-party providers.

Cat focused on reducing operator fatigue through improvements to seat comfort, lines of sight, heating and air conditioning and operator controls. Cabs can be equipped with a radio, Bluetooth and a phone charger.

Kohout expects more advancements to make motor graders easier to operate, especially as the industry faces a continued labor shortage and needs to attract younger workers as well as keep the veterans.

“All equipment, especially graders, need to help shorten their learning curve where it makes sense, and in many cases be able to hold onto a seasoned operator for a few more years,” he says. “Automation is going to help a lot. We can keep the machine up and going and do things to help prevent downtime, but there will still be the need for that knowledge to manage the material and know what to do on the jobsite, as we provide features to make motor graders easier to operate.”