Manitowoc unveils MLC100-1 crawler as “quickest crane to erect, decommission in its class”

During a media event in Pennsylvania Thursday, Manitowoc unveiled the newest model in its crawler crane lineup, the MLC100-1, with an introduction fit for a rock star.

As Springsteen’s “Born in the U.S.A.” popped through an array of loudspeakers, two panels guarding the machine from view opened wide like barn doors, unveiling a split American flag now flanking both sides of the new 100 t (110 U.S. tons) machine. But the crane was quickly obscured again, this time by a pyrotechnic strip sending sparks into the air.

When the smoke cleared, there stood the 100-1 carrying a banner explaining all the fan fare: “Only 100-Ton Crawler Crane Proudly Made in America.” Despite the fanfare, the MLC100-1’s American roots are far from the most defining feature of this new machine. The company says what sets this machine apart is how quickly it can get to work.

Manitowoc says the MLC100-1is the quickest crane to erect and decommission in its class.

The time savings comes from the MLC100-1’s self-assembly hook, which allows operators to install the counterweight without assistance. “During assembly, the crane uses a single segment of hoist line with a button termination, which is routed through sheaves in the boom butt,” Manitowoc explains in its press materials.

I asked crawler cranes product manager Brennan Seeliger to expand a bit on that explanation.

“The main differentiator in terms of self assembly as far as this machine goes is we added the sheaves in the boom butt. We can run a load line over those and use that for self assembly. This is different from the competition and our previous product in which you needed the boom top installed on the machine to run a load line,” he says. “In addition to that we have a smaller white sheave in the lower part of the boom butt that we wrap the wire rope around to install the carbody counterweights. Previously, a come along or some outside assist was required to move the counterweights in far enough and get that short radius to hang the carbody counterweights. So this solution is what we came up with and it’s worked really well so far.”

Global product director for Manitowoc crawler cranes Harley Smith says the crane comes as a response to customers asking for a reliable crawler with a fast setup time. “We want to show our customers that we’re listening,” he says.

“This crane is a huge time saver, with extremely quick setup, and tear-down times, giving our customers more time to get to work,” Smith says, adding that “even our long-term customers will be surprised at how quick this crane can get off the truck and get right to work.”

To create a crane that gets to work so quickly, Seeliger said engineers decided on a design that was “more rugged” and simplistic and allow customers to customize according to their needs.

“It’s easier to build a machine that’s a little bit more bare bones and just to the core of what the machine needs to be, and then add the frills on later,” Seeliger says. The MLC100-1 can be equipped with several options including a free-fall, a third-drum with a 22m (72-ft.) wire rope, generator-powered boom lights and a cold weather package.

The crane also features a new cab design which is wider and affords easier access thanks to additional grab bars and a movable left-hand console. Seeliger says that Manitowoc reduced the size of the consoles in the cab, making them narrower. The wider cab and smaller consoles amount to a 10-percent increase in legroom. “It’s an extremely noticeable difference when you’re in the cab,” he says.

The cab features a high-back seat with head rest, electronic seat controls and an improved heating and cooling system. Seeliger says this new cab design will be incorporated throughout the Manitowoc crane lineup over the next few years.

Operation of the crane is done via Manitowoc’s Crane Control System (CCS). “The biggest thing with the CCS is that it’s electric over hydraulic control which is somewhat unique in this size class,” says Seeliger. “It allows us to fine tune the operation and provide a better user experience to the customer.”

Manitowoc says the crane “allows for easier service than ever, with high-visibility sight glasses and quick drains on ever gear box,” adding that the crane also offers easy access to the main valve. 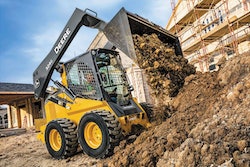 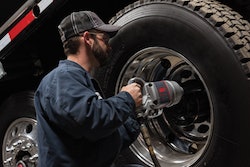 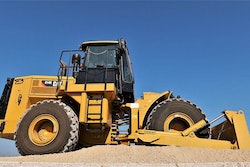