How cool is this: An excavator that you can start with an app on your smart phone.

That’s just a tiny fraction of the digital razzle-dazzle Cat showed us last week in the most significant change to its excavator program in 25 years.

The changes will eventually roll into almost all Cat excavators, but the company chose to start this Next Generation program with its 20-ton excavator class, specifically the new models designated the 320GC, 320 and 323. Brian Stellbrink, market professional, global construction and infrastructure called this strategy, “The new platform for the future.”  Plans are underway to apply the same redesign to the 36 ton excavators next year and the 30 ton excavators a year after that.

The strategy behind the launch is to offer a low spec version and two high tech versions of the same machine. The three machines include the 320 GC, the 320 and the 323.

The GC model is a no-frills excavator for the contractor who doesn’t need a production machine and wants the lowest operating cost per hour. This is the machine for contractors who don’t intend to put a lot of hours on the machine day in and day out, or don’t need digitally-guided or GPS automated digging controls—in other words a cost-effective solution for light or medium duty use.

The latter two machines offer 2D and 3D machine control and a number of features to bolster performance in production environments and high-load applications. But all three machines share some significant mechanical innovations.

The Next Generation excavators achieve the performance numbers cited above with what Zack Kauk, vice president excavation division, calls a “digital heart,” that includes a first of its kind electro-hydraulic valve, electronic pump and electronic engine that are knit together with a single electronic control unit that governs every aspect of the machines’ performance.

Wrapped around this intelligent hydraulic system are a bank of five separate electric on-demand fans to individually control temperatures on hydraulic oil, engine oil, the radiator, and the air-to-air aftercooler temperatures. Most excavators (and most machines, actually) combine cooling functions into two or three radiators.

The five-radiator bank on the new Cat excavators means that you can quickly achieve and maintain the optimal temperatures on each of these functions without the compromises of a shared radiator and fan. That helps maximize the performance of each component. And the fans, being electronically controlled and on-demand, reduce parasitic horsepower drag on the engine caused by more redundant or less intelligent systems.

Although they share the same mechanical DNA as the 320 GC model, you get an impressively wide range of digital technologies when you step up to the 320 or 323 models.

Standard from the factory, these machines include a 2D dig assist system. The 2D systems automate the position of the bucket to give you the ability to dig to a precise depth and contour. The 320 and 323 also feature Cat Payload as standard—an automated bucket weighing system that enables you to put precisely the right amount of material in a truck and avoid the wear and tear on trucks that comes with overloading.

You can also get Cat Grade with 3D as a factory option on the 320 and 323, which ties the machine into satellite positioning and digital site plans. Another option is Cat Grade with Advanced 2D which adds in-field design capabilities through a touch screen monitor.

The assisted and automated digging controls are governed by sensors on the boom, stick, and bucket. These add a tremendous amount of productivity to your excavator operations. No rework, no rough-out and then clean-up. No putting a guy with a survey pole in the trench to measure the depth. And if you’re cutting swales or slopes, you can dig precisely to the finished grade. If you need to cut a long trench at a very shallow but critical slope, say three percent or so, just dial it in and go.

Automated digging is not new. Cat debuted a version of this several years ago and called it the Smart Boom. Komatsu also has an automated digging system that we showed you last year.

But Cat added swing and body tilt sensors to the Next Generation 320 and 323 excavators that bring additional benefits. These sensors create what Cat calls an “E-fence” and “E-ceiling.” Set the parameters of this E-fence or E-ceiling and you can prevent the bucket or boom from inadvertently hitting an overhead power line, a bridge, a wall or structure nearby, or swinging into traffic on congested road building sites. A rear facing camera, also helps improve safety.

The assisted and automated digging plus the E-fence capability not only improve productivity and safety. They also reduce the intense level of concentration operators need to maintain working in a constrained or challenging environment. Over the course of a shift this level of concentration can be mentally fatiguing. By limiting how high or far the boom and bucket go, you help your operators stay mentally sharp and fresh.

Everybody redesigns their cabs it seems like, but Cat went an extra step and included the aforementioned smartphone start feature in the Next Generation excavators. You can also start it with a key or a touch pad, but no doubt younger operators will get a kick out of using the myEquipment app to start the machine. The app also allows operators to set up their personal preferences for the controls, which the machine will recognize as soon as they enter the cab with their phone.

Caterpillar also enlarged the cab and improved sightlines to the operator’s left. Special attention was paid to the design and the seat and the seat fabric to prevent it from getting worn or torn—something that often diminishes the perceived value of a used excavator. The eight-inch monitor inside the cab is a touch screen with smart-phone like options and plenty of space to designate automated settings and read 3D GPS plans.

Caterpillar will say that they don’t have the lowest cost machine but they do have the lowest lifecycle and owning and operating costs. That comes from a high resale value but is also enhanced in the Next Generation excavators by a handful of new component designs that result in extended service intervals for hydraulic oil and filters and a new air cleaner system with double the life.

By getting rid of the air and hydraulic filter changes at 1,000 and 2,000-hour service intervals, the cumulative number of filter changes required at 3,000 hours has been reduced from 17 to 3, says Stellbrink. 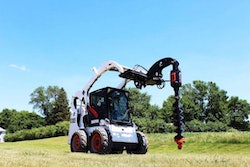 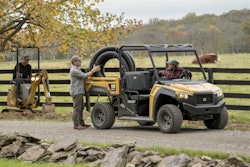 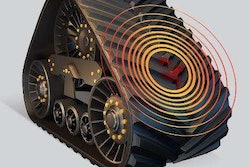