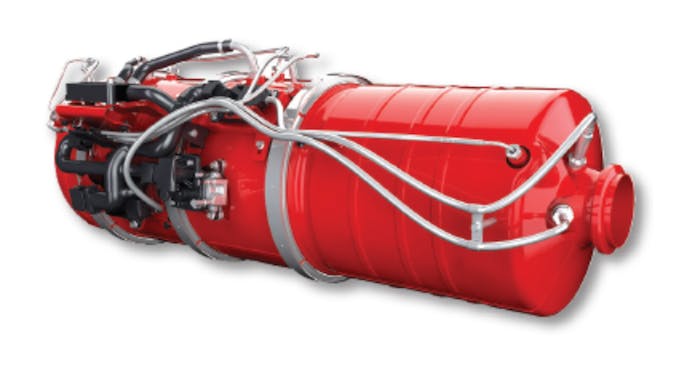 That’s a lot of hardware to hang on any engine block, not to mention all the sensors, fittings, brackets and weldments that go along with it. There is a trend underfoot now, however, that seeks to simplify this arrangement. We took a look at a handful of these devices at ConExpo.

A few years back, Cummins started talking about a single module arrangement that would put all the exhaust aftertreatment components into one streamlined device. Then last year at Bauma, the big construction equipment trade show in Germany, Cummins announced it would use the single module concept in its forthcoming Stage V diesel engines. 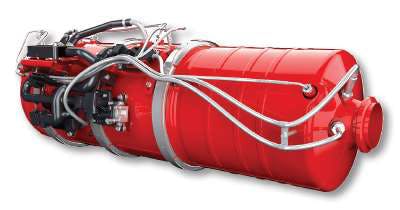 Cummins’ single module system for exhaust aftertreatment allows the company to do away with heat generating EGR systems.

The single module system combines a diesel particulate filter and selective catalytic reduction in one torpedo-shaped canister. According to the company, this cuts the size of the aftertreatment in half and the weight 30 percent. Passive regeneration keeps the DPF clean with no impact on equipment operation and no operator intervention.

American contractors got their first look at the system at ConExpo. Cummins calls this a “fit and forget” system. That means simplified installation for the OEM, and for the end user, it can reduce emissions almost entirely by passive means, requiring no work slowdowns or operator interventions. Cummins will use the system on engines ranging from 100 to 430 horsepower.

John Deere Power Systems also showed contractors its simplified solution at ConExpo. Deere will initially offer its system in two sizes on its new 13.6-liter engine. One mounts vertically, the other horizontally. The emissions system’s design uses an inline aftertreatment containing a DPF, SCR and diesel oxidation catalyst packaged into a single unit.

“Our ability to tailor the configuration of our integrated emissions control system allows us to accommodate increasingly complex package requirements while meeting the expanding complexity in world emissions standards,” says John Piasecki, director of marketing, sales and customer support.

Deutz is using the same concept in some of its engines. The Deutz DVERT (Deutz variable emissions reduction technology) system combines a DOC/DPF with SCR module in either a single long canister or what the company calls its “flexible unit,” which is two shorter canisters mounted side by side.

And back in 2013, JCB introduced a “one-can” engine solution, which is unlike the others mentioned above in that it does not need a DOC or DPF and reduces the length of the mixing tube for the SCR dosing to take up less space in the engine bay. 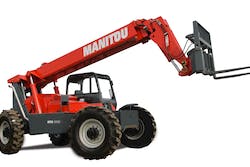 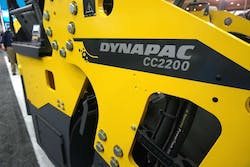 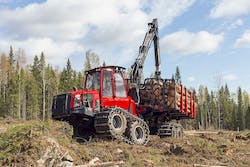 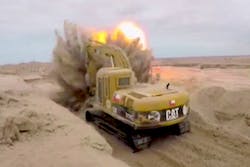