As part of an April Fool’s Day prank, Skyjack sent out a press release announcing a “cost-to-coast” Wi-Fi network that would cast its signal using “discrete Wi-Fi” chips that had been installed on all new machines in the last five years. Photo: Skyjack

Last week, Skyjack sent out a press release announcing the launch of SKYfi, a new service from the aerial lift maker that would provide wireless internet connectivity using its machines as giant antennas.

Mind you, this wasn’t pitched as a service that would merely add a Wi-Fi hotspot to its machines, much like General Motors has been doing with its cars and trucks the last several years. The Skyjack release bills SKYfi as a “major new initiative that will provide an unmatched global Wi-Fi- network.” The company was announcing that it was ready to launch a legit wireless network. In essence, an aerial lift company was announcing its intent to compete with wireless carriers like AT&T and Verizon.

The release encouraged Skyjack customers to log on to skyjack.com/skyfi and register for the service which would be free for a limited time. When doing so, they were told to enter the password “Loof Lirpa”.

Consider the interest of editors here at Equipment World piqued, to say the least. But how was Skyjack going to pull this off?

The release went on to explain that the aerial lift maker had been secretly installing “discrete” Wi-Fi chips on all of its machine for the last five years. And now that “a critical mass has been reached” it was time to flip the switch and activate a daisy-chained network of lifts that would provide “coast-to-coast” Wi-Fi coverage.

I found all of this a little hard to believe, so I reached out to Skyjack with a few questions on the logistics of turning thousands of aerial lifts—now owned and operated by people that don’t work for Skyjack and weren’t let in on plans for such a service—into a network of hotspots. Skyjack spokesperson Susannah Wright responded with the following via email.

“Can I just check that you are aware that this is a light-hearted April Fools’ Day joke? The premise is that Skyjack has been installing wifi hubs on its machines to create a huge mobile wifi network. People are encouraged to log on and register (as if registering for the wifi service) when the joke will be revealed,” Wright wrote. “We hope that they will take it in good humour, and as a thanks, they will actually receive a small gift.”

While it’s possible some people would have immediately realized this was a joke after seeing that the password for accessing SKYfi was “Loof Lirpa” (an anagram of April Fool), the fact that this was disseminated as a press release was effective in erasing many of my immediate doubts about the supposed service. In fact the press release was posted on a few news sites without any mention that SKYfi wasn’t a real service. That may have been due to the fact that it was sent out a few days before April Fool’s Day—there was a considerable piece of context missing.

The SKYfi service is still being featured at the top of the company’s website and the graphic makes no mention of the joke.

I reached out again to Skyjack to see how many people have fallen for the prank and “signed up.” After all, the form required you provide your street address and a “valid email address.” In exchange for your information you are presented with the following screen, which lets you in on the joke and tells you that a keychain is being mailed out to you.

In an email, Wright says figures aren’t yet available and notes that Skyjack plans to keep the SKYfi page online for one week. 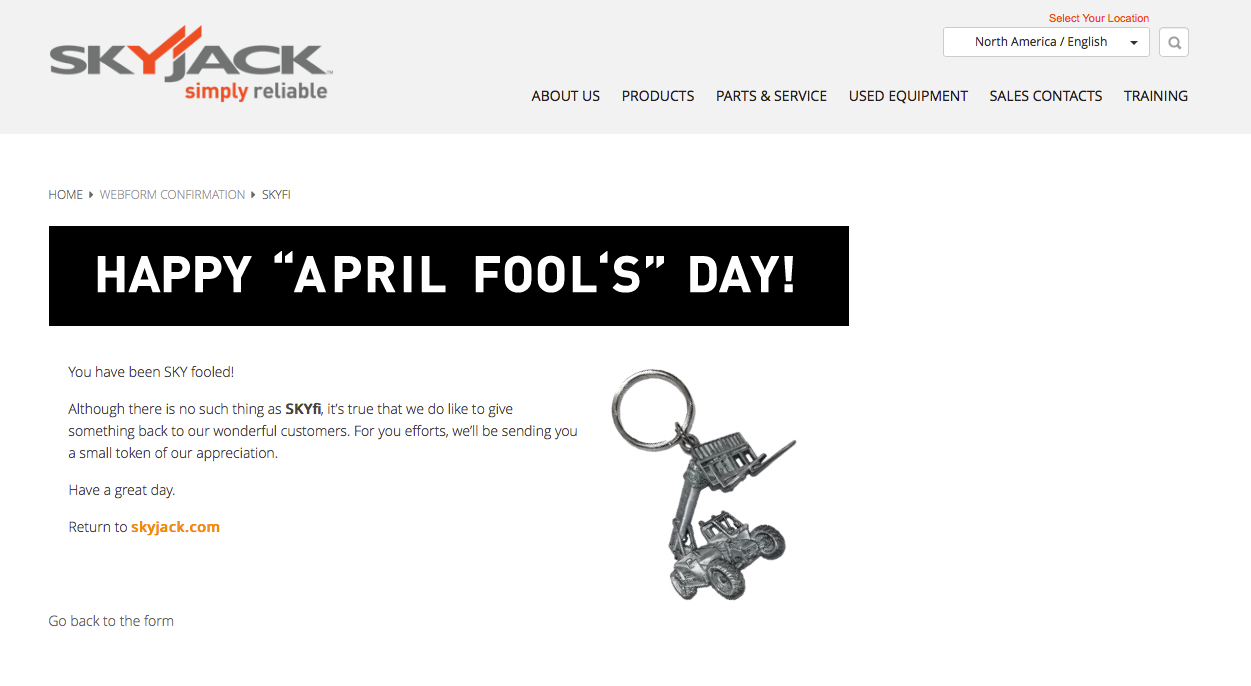