Touting a payload measurement system that comes standard, Hyundai has introduced two new models the company says are meant to fill gaps in its HL-Series lineup of wheel loaders.

Powered by Cummins engines and available in a long boom, extended reach (XT) configuration, Hyundai introduced the new HL965 and HL975 loaders at ConExpo 2017 last week in Las Vegas. The company also introduced an XT configuration for its HL940 loader at the show. Hyundai’s XT lift arms provide about 14 inches of additional dump height and reach.

The HL975 is powered by a Cummins QSG12 engine delivering 331 net horsepower and comes equipped with a standard 6.3-cubic-yard bucket. Hyundai says the machine is geared toward the aggregates industry, adept at digging and loading in quarries, gravel pits, surface coal mines and other high-production applications. The machine weighs in at 58,420 pounds and has a rated tipping load of 44,090 pounds.

The drivetrain on both the HL975 and HL965 feature ZF axles and transmissions. As larger models in the lineup, both machines also feature an electro-hydraulic control system that has improved the HL Series’ controllability and productivity, Thompson says. “And it makes possible other cool new features, such as cushioned boom and bucket ‘soft end stop’ to reduce the shock load and improve material retention, and fine control mode to reduce function speed for improved precision.”

An onboard weighing system accurate to +/- 1 percent is standard on all HL900 wheel loaders. Hyundai says the system features automatic and manual settings for monitoring individual and cumulative bucket load weights and displays measurements on the display in the cab. The company says while the system is not precise enough for certified payload measurements, it is “considerably more accurate than typical onboard scales and can help in calculating productivity metrics.”

Introduced in 2015, the HL Series brought a new cab design to Hyundai loaders that is quieter and 10 percent larger than its predecessors. The redesign also added a new 7-inch touchscreen display that integrates all switches along with an inclinometer, which assists the operator in maintaining a level bucket, an ECO Gauge, which displays a color letting the operator know how fuel efficient their operation is, and the view from an integrated rear view camera.

The cab also features a heated air-ride seat. A Smart Start ignition system is an available option protecting machine start with a Bluetooth key or a password. 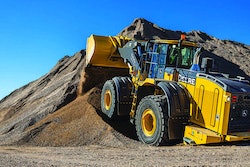 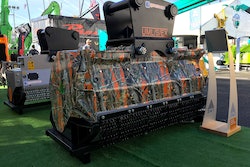 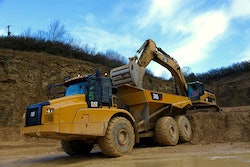