Tonight at a pre-Work Truck Show event here in Indianapolis, Ford unveiled the 2017 Ford F-Series chassis cab trucks, with the automaker citing a series of improvements amounting to its most capable chassis cab lineup yet.

These chassis cab models benefit from the stronger new frame and aluminum body found in the the 2017 Super Duty pickup models.

Before we get into those new engineering details, these new trucks will feature the highest ever power rating of any generation of Super Duty chassis cab models: 330 horsepower and 750 lb.-ft.. The second-generation 6.7-liter Power Stroke V8 diesel provides a power increase of 30 hp and 90 lb.-ft. of torque.

The new models will also be the first Ford chassis cab trucks to feature Ford’s all-aluminum Super Duty cab, which lightens the truck by 350 pounds.

And that weight reduction pays huge dividends because Ford engineers reinvested it in the truck’s frame.

That frame is 95 percent high-strength steel and Ford says it boasts eight times the torsional rigidity and 24 times the stiffness of the previous frame. It also features through-welded crossmembers—including an additional floor crossmember to support greater fifth-wheel or gooseneck towing capacity—fully boxed rails under the cab and forward, and an open C-channel frame rails behind the cab which enable easy body and vocational equipment upfits.

Ford also beefed up the axles, brakes and hitches to handle larger loads and upgraded the truck’s suspension steering.

The end result is a 500-pound boost to the front gross axle weight rating—now up to 7,500 pounds—and a best-in-class gross combined weight rating of up to 40,000 pounds—a 5,000-pound boost that places the truck’s at half of the maximum GCWR of an 18-wheeler on most U.S. federal highways, Ford says.

With this new generation of Super Duty chassis cabs towing capacity has been increased as well though Ford did not name a specific number.

And with all that added capability, Ford also increased fuel capacity with a 48-gallon tank and a larger DEF tank.

“We are reinvesting the weight saved by using advanced materials, giving that savings back to customers with more capability and performance than ever,” said Craig Schmatz, Ford Super Duty chief engineer. 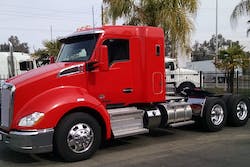 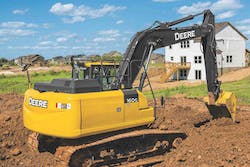 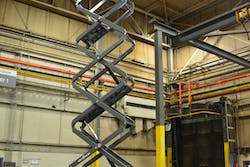 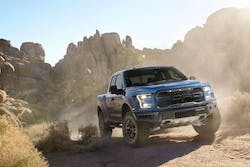