A look back at 50 years of the Volvo articulated truck 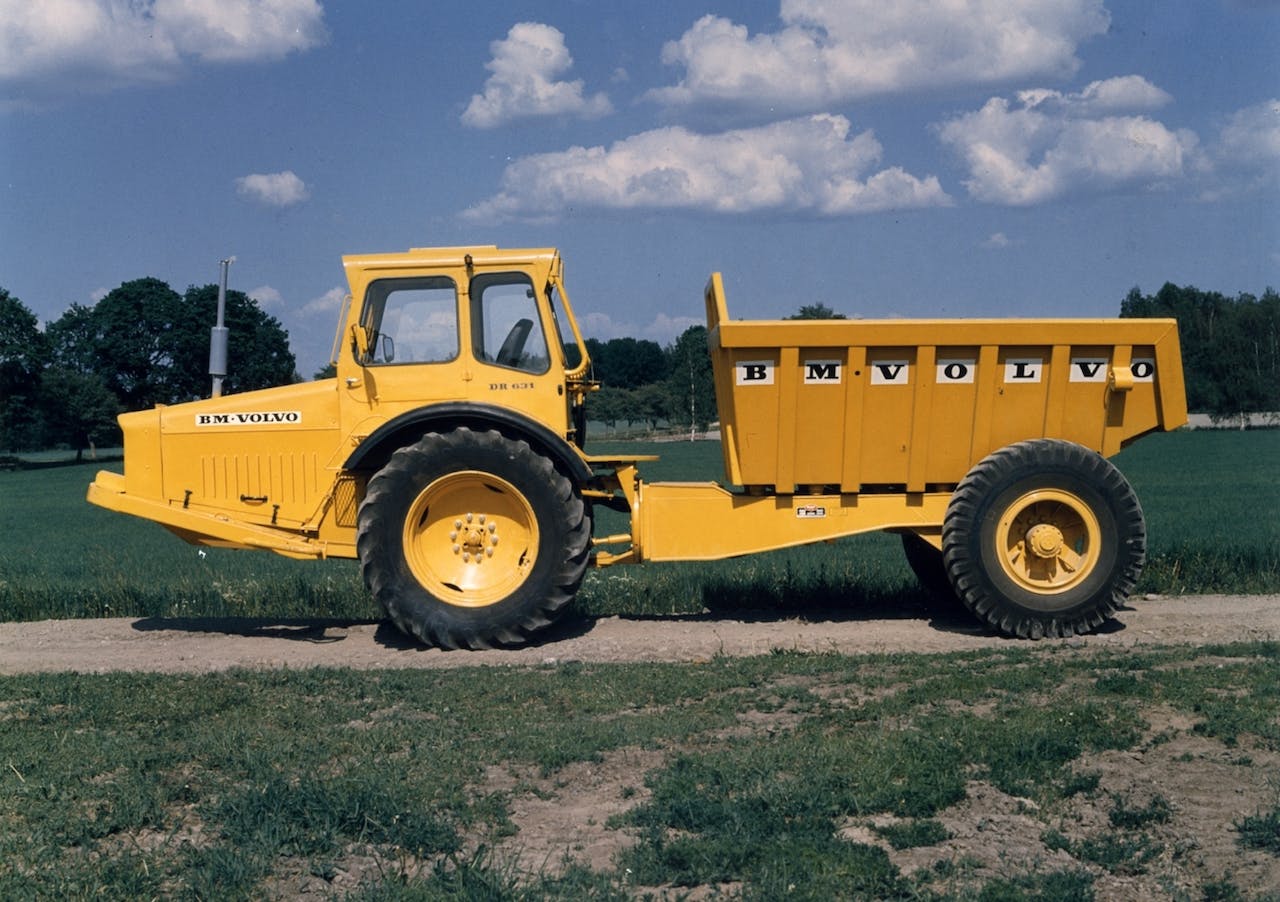 The 10 tonne payload DR631, aka Gravel Charlie, heralded the birth of the articulated hauler.

Celebrating 50 years since its creation of the initial articulated truck concept, Volvo Construction Equipment is also offering a sneak peek at its new world’s largest 60-ton A60H hauler. Volvo plans to showcase the A60H at the bauma trade show, April 11-17, in Munich, Germany.

Volvo developed a tractor connected to a trailer via an articulating hitch in 1966, with the introduction of the DR631, which has been since dubbed “Gravel Charlie.” This machine is credited with starting a new category of construction equipment, a highly maneuverable machine that can haul tons of material over muddy, rutted rough terrain.

Over time, Volvo’s artics grew much larger than the 10-ton Gravel Charlie, with added features such as bogies, suspended front axles and 6-wheel drive systems. Here’s an overview:

The Gravel Charlie evolves, and a year after its introduction, the Volvo DR 860 featured a bogie, helping keeping the truck body level and stable while the wheels dealt with uneven surfaces.

Volvo added a turbocharged engine to the DR 860T and sped things up with the introduction of 31-mph 5350 in 1979, a speed achieved with the addition of a suspended front axle and automatic transmission. A 6-wheel drive system further increased traction. 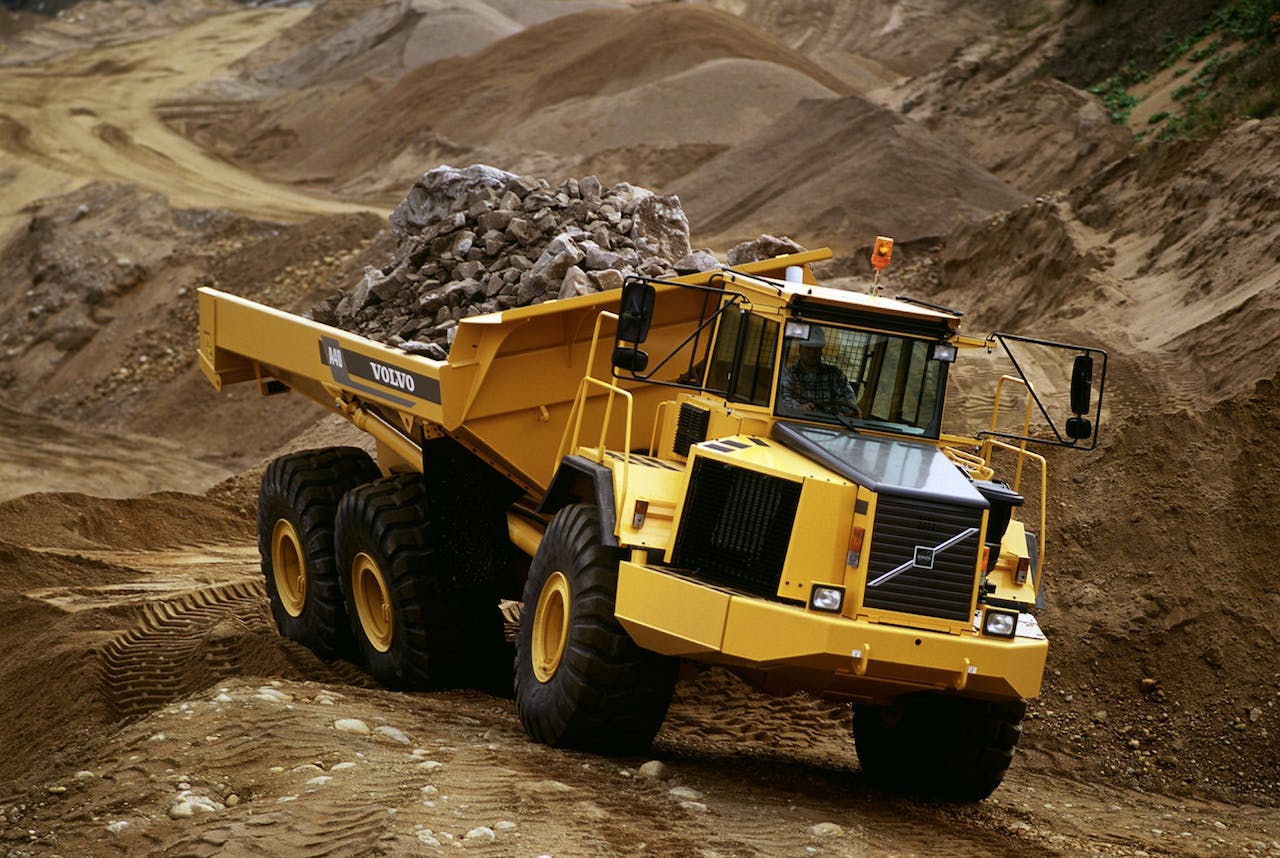 The A20 – with a 200-horsepower engine and 20-ton payload – debuted in 1986, followed shortly by the 35-ton A35, which also had a retarder built into the transmission to reduce wear on service brakes. 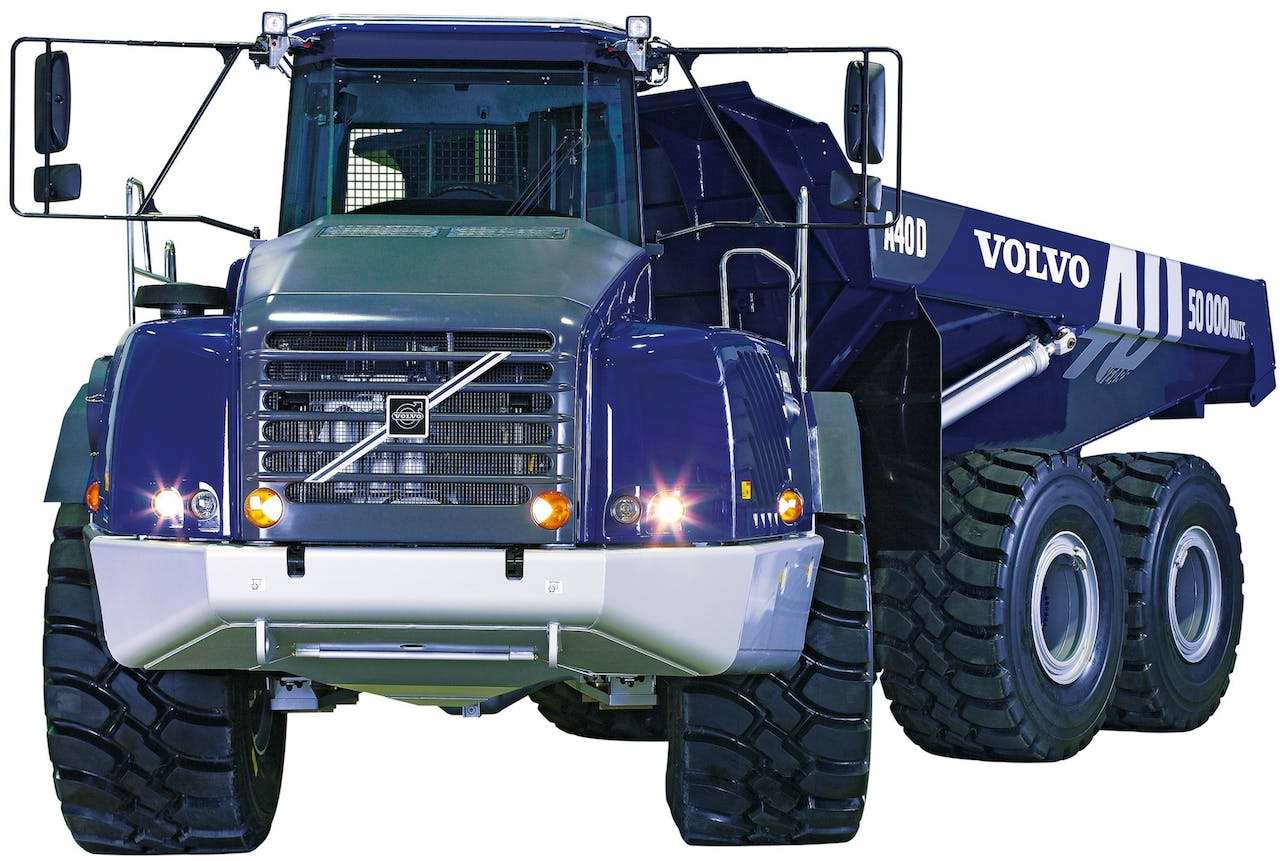 Volvo’s artics got a major overhaul in 1993 with the introduction of the C-Series. New features included a lower emission engine, fully automatic transmission and 100-percent diff locks. Also launched in the mid-90s: the 40-ton A40, with a 400-horsepower engine and oil-cooled wet disc brakes. 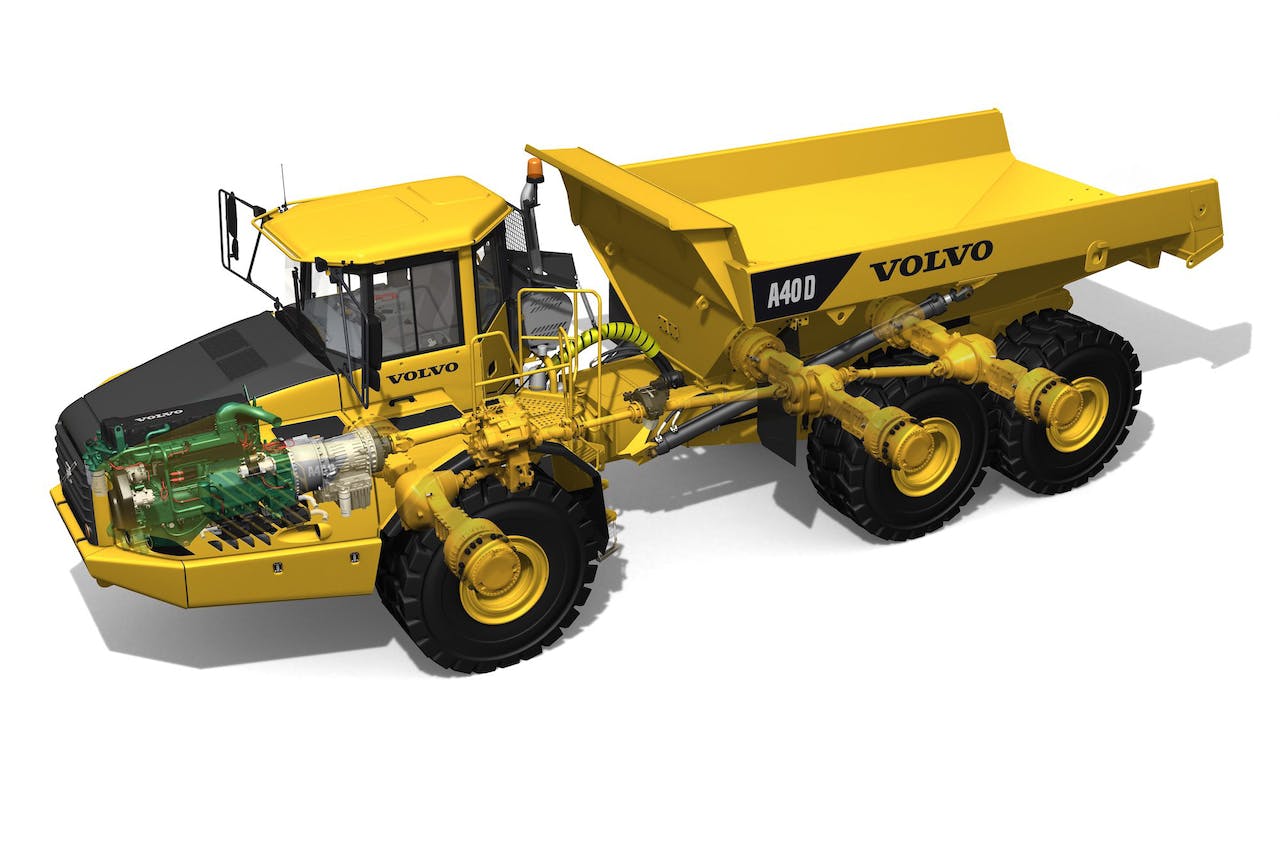 The D-Series debuted in 2000 with five models ranging from 24 to 37 tons of payload. For the first time, diagnostic electronics alerted both operator and technicians of problems before failure. Operators were able to use Automatic Traction Control to automatically control diff locks and 4-wheel and 6-wheel drive configurations while driving. In 2007, the company introduced hydraulic suspension with automatic leveling and stability control on all wheels, which allowed higher speeds. 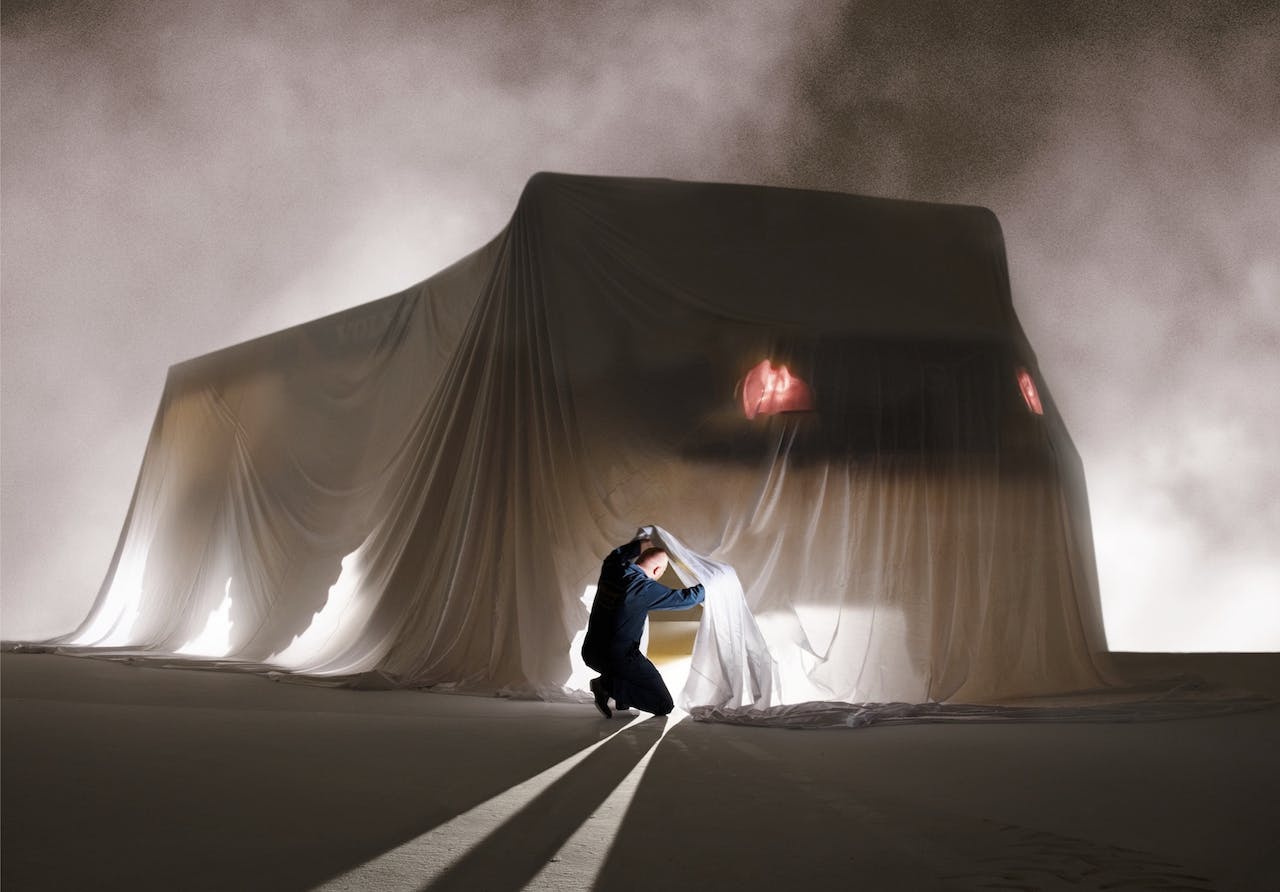 Volvo introduced the F-Series in 2010, with Tier 4 Interim engines and a standard telematics package. The G-Series followed in 2014, this time with a Tier 4 Final engine, and an onboard weighing system on the larger models. And on board for a buama introduction this year: the H-Series, including the first 60-ton articulated hauler, the A60H, which will be the largest articulated hauler in the world.

The A60H will have a 40 percent increase in payload; Volvo is positioning the hauler to be an alternative to smaller rigid frame dump trucks and vocational Class 8 trucks operating on rough terrain. The haulers will also feature automatic drive combinations, an all-terrain bogie, hydro-mechanical steering and active suspension. 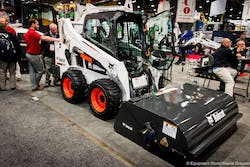 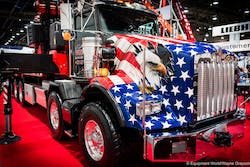 PHOTOS > The mixer, pump, dump and pickup trucks of World of Concrete 2016 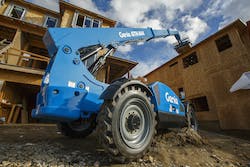 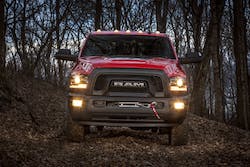