At a recent media event, Kawasaki introduced a beefed up “XT” redesign (stands for extreme) of its two flagship models, the 95Z7XT and 115Z7XT, alongside the unveiling of two new loaders, the 90Z7 and 67Z7.

To handle the extra weight in the buckets and ratchet up the breakout force, the boom arms were shortened and made thicker and stronger. This keeps the center of gravity closer to the base so as not to stress the front-end hydraulics and components. The hydraulic cylinder bore for the bucket cylinder was enlarged as well. Reinforcements to the chassis handle the additional torque and loads, and the counterweight was increased to balance the extra weight up front.

Kawasaki also announced its first Tier 4 Final wheel loader, the 90Z7. To meet exhaust emissions requirements this machine uses selective catalytic reduction (SCR) and a diesel oxidation catalyst (DOC) but does not require the use of a diesel particulate filter (DPF).

Manufacturers try to avoid DPFs when possible because they require regeneration to burn off soot that collects inside the filter. This process can be invisible to the operator but may require you to temporarily cease work under certain conditions. DPF exhaust emission technology also tends to consume more fuel. But with the DPF-free design, the soot is burned up in-cylinder and these problems are avoided. Kawasaki used Isuzu engines on the Tier 4 Interim version of the 90Z7, but returned to their traditional supplier Cummins for the Tier 4 Final version.

The new engine is a Cummins QSL9 that pumps out 275 net horsepower. Diesel exhaust fluid (DEF) consumption for the Cummins mill is about 3 percent of fuel burned, and fuel efficiency is up about 5 percent according to the company. The Tier 4 Final engines also have a better transient response that Tier 4 Interim, meaning the engine revs up quicker when you increase the throttle.

Why the lock up? All torque converters lose some efficiency due to the fact that they use a fluid-to-fluid coupling; basically like two fans spinning each other except they’re moving hydraulic fluid rather than air. This makes for smooth gear changes but at a steady speed without gear changes they’re somewhat less efficient than a purely mechanical, gear-to-gear coupling. The lockup function simply restores the mechanical connection whenever the speed and engine rpms reach a steady state.

At their product press conference, Kawasaki gave us a demonstration of the effectiveness of a lock up torque converter by staging a drag race between two identical wheel loaders, one with lock up and one without. In a run of about 200 yards, the loader with the lockup torque converter was roughly 80 yards ahead.

When you need a burst of extra power the 90Z7 offers a temporary power boost function that can speed up cycle time whether you are using normal or power modes. The Flexshift feature also assists in improving cycle times. With increased sensors, and new logic, the loader’s “Intellidig” system responds to the working conditions and balances the proper speed and rimpull to optimize digging performance.

With the goal of improving fuel efficiency and optimizing performance, Kawasaki also completely redesigned its 67Z7 wheel loader. The new machine puts power to the ground with a hydrostatic transmission and a Tier 4 Interim, 152-horsepower Isuzu diesel engine.

The hydrostatic transmission and inching pedal allow for creep control giving you precise, slow speed work in first gear even when the machine is running full throttle.

Limited slip differentials are standard with internal planetaries and dual circuit wet brakes. The Z-linkage design 67Z7 can be outfitted with a 3.1 cubic yard general-purpose bucket or a 3.5 cubic yard material-handling bucket.

The 67TM7 gets a 2.8 cubic-yard coupler bucket or a 3.1 cubic-yard pin-on general purpose bucket and a four speed, hydrostatic drive train. It reaches 5 inches higher at the hinge pin than its sister Z-linkage machine, the 67Z7.

The hinge pin on the 70TM7 tops out at eight inches higher than its Z-linkage equivalent. You can spec the 70TM7 with either a 3.4 cubic yard coupler bucket or a 3.7 cubic yard pin-on general-purpose bucket. The 70TM7 also has what the company says is the simplest emissions system in its class with no SCR and no DPF.

Just so you know

The value of open center hydraulic systems is that even when the machine is doing no work, a small amount of hydraulic fluid is still circulating through the system. Closed center systems shut off the flow entirely when the machine stops working. But because of their constant flow characteristics, open center systems can respond to demands for flow and pressure faster, resulting in better cycle times.

Kawasaki also put self-lubricating bushings on the Z7 loaders, what it calls “HN” bushings. Operators should still grease these bushings, but in the event that that doesn’t happen, the bushing contains a reservoir of lubricant that will still protect against metal-to-metal contact for many hours. The HN bushings are used in all the loader arm and frame pivot points and are replenished each time the pin is greased. 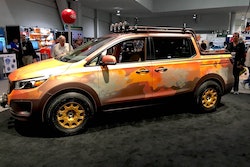 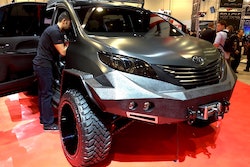 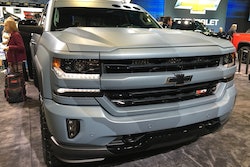