At the SEMA show, Nissan unveiled what it is calling “Project Triple Nickel,” a slightly modified 2016 Titan XD pickup that the automaker will begin entering in land speed record races.

The effort is an extension of Nissan’s partnership with Cummins, the supplier of the 5-liter turbo diesel engine at the heart of the new Titan, and a company well-acquainted with land speed record racing.

Brent Hagan, a senior planner for Nissan product planning development, says his company’s decision to start racing the truck wasn’t about promotional value. It’s all about the data.

“This is the purpose,” Hagan said pointing toward a production model Titan XD on display inside the Nissan booth at SEMA. “We want to use the data we gather racing on the salt flats to make the product better.”

The 2016 Titan XD will begin hitting dealer lots in December and Hagan said Nissan customers can expect to see much more aggressive development around the truck moving forward. “This is a work in progress,” he said.

Hagan explained that even though land speed record racing isn’t done in completely stock vehicles, Nissan chose to enter a class that severely limits what can be done to the truck.

“We wanted to maximize the learning out of this,” he said. “There’s no point for us in putting a body on a tube frame and racing that.”

Nissan announced the truck will be competing in the D/DT class, where the current record is 191 miles per hour, as well as the FIA class A-III-9, where the record is 115 mph.

Beyond a sweet nickel nickel body wrap, wheel covers, some Mickey Thompson tires and safety features like a roll cage, the only racing modifications that will be done to the Titan that will be raced are a lowered suspension and a custom-fabricated front air dam. A bed cover will reduce drag as well, but that’s not exactly a racing mod. 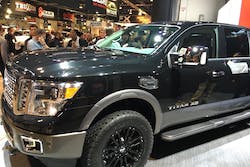 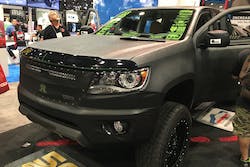 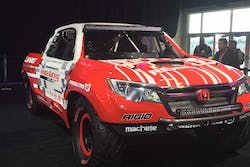 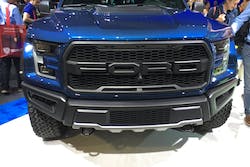