It’s still a bit hard to tell whether or not painting your entire truck with bed liner is a thing yet or not. A lot of adventurous truck owners have embraced the look over the last few years, but on the highways you still don’t see many. But at SEMA, and this shouldn’t come as any surprise, there are quite a few.

That’s because bed liner paint jobs actually do look not only cool or interesting, but nice too. They kind of combine the look of a matte finish with a bit of pearlescence since all those tiny ridges in the texture of the spray-on bed liner catch light.

There were a ton of these bed liner paint jobs to see at SEMA this year, but the one that caught my eye was a 2016 Chevrolet Colorado designed by Roger Fessman at Fear One Custom Auto Design out of Prescott Valley, Arizona.

Fessman does a special vehicle each year for SEMA and said he went with a bed liner design on this Colorado because he wanted to go with an extreme off-roading theme. Amazingly, the whole customization only took about a month, including the spray application, done with Rhino Linings, which only took one week.

“And only three hours of that was actually doing the spraying,” Fessman said. “The rest of the week was mostly spent doing all the taping off.” He added though that considerable time is spent roughing up the truck’s original paint job so the bed liner will stick.

Once the liner had been applied, Fessman then gave it a UV coating, noting that after enough exposure to sunlight, the liner’s color will start to fade.

When I first happened upon the truck on the show floor, there were at least a dozen people gawking at it and taking pictures. It has quite the unique look in person. Fessman said it’s been one of his biggest hits at the show and said the number one question he’s received about the bed liner application is whether or not it comes in different colors. (It does.)

And beyond the cool look the application offers, any worries about scratches you used to have go right out the window.

“Something that kind of surprised me was how many ladies have come up to ask about it,” Fessman said. “A lot of them were telling their husbands ‘We should get something like this on my SUV.'” 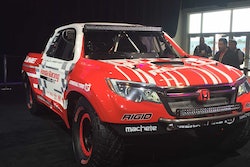 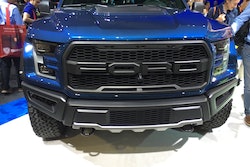 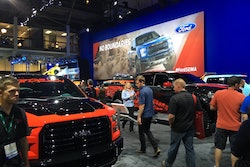 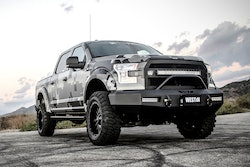