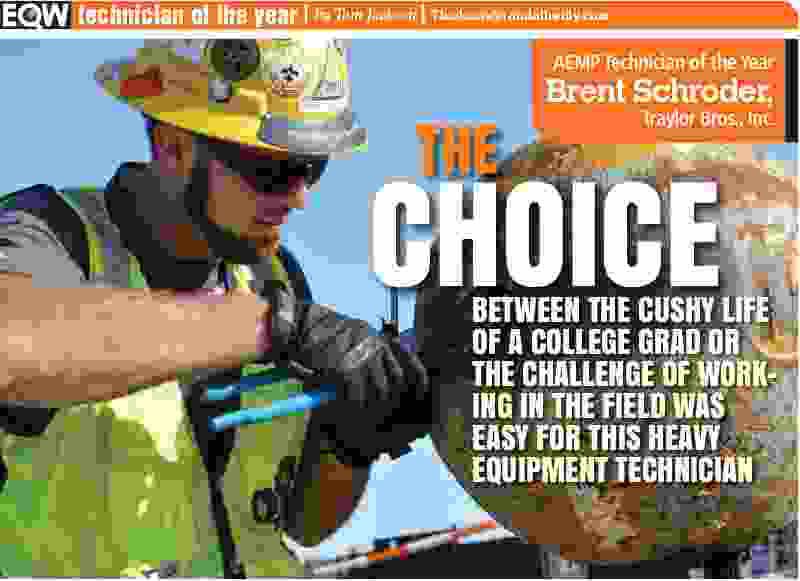 You don’t find many young guys with college degrees working as heavy equipment technicians. But the Association of Equipment Management Professionals’ Technician of the Year Brent Schroder found out quickly that working on equipment is far more satisfying and lucrative than what he could be doing with his bachelor’s degree in finance.

Growing up in Michigan and Kentucky, Schroder learned how to work on heavy equipment and cranes from his father. After high school he enrolled in Murray State University but kept building his heavy technical skills on summer jobs with his current employer Traylor Bros.

In the summer of 2004 his first job with Traylor Bros. wasn’t exactly a mechanic’s dream. He spent most of that summer in Kentucky on the Mississippi River working for a subcontractor at $10 per hour, blasting, scraping and sanding old cranes and other equipment in preparation for repainting. To this day, Brent says, he still gets a sinking feeling every time he sees a pneumatic sander.

But when the opportunity to work at a higher skill level came along, Brent was ready and paid attention to the people who could best mentor him. “I’ve been lucky to work with several people that really know what they’re doing,” Schroder says. “You can bounce something off of them and they help you figure it out and show you the shortcuts.”

Schroder graduated college in 2009 with honors. But when he looked around at what his friends with finance and business degrees were doing, what the entry-level jobs were like and what working in an office was going to be like, he knew he had to go back to equipment.

So Schroder came on full time with Traylor Bros., working on equipment in New Orleans where Traylor Bros. is a joint venture partner to PCCP Constructors. There, they are building flood protection that will keep future floodwaters from inundating New Orleans.

Thanks to the Traylor Bros. policy of having every employee go through two weeks of training a year, Schroder’s skill set has rapidly evolved since he came on full time.

“One thing I always tell people about Traylor Bros. is that I really appreciate the opportunity to develop my skills through training and the hands-on opportunities to diagnose issues,” Schroder says. “This training and working with a wide variety of mechanics and superintendents at Traylor Bros. and the joint venture partners has led to my place in this organization today.”

Schroder is currently certified as an AEMP Equipment Manager Specialist (EMS) and holds certifications for four types of cranes from the National Commission for the Certification of Crane Operators. Additionally he earned Manitowoc’s Top Performer award in that company’s training school.

Although he works primarily servicing large crawler cranes, Schroder says he likes the variety. “It’s nice working on a job like this or any kind of construction job because you’re never working on the same thing,” he says. “When you’re out there in the field working on stuff you don’t have any choice but to figure things out.”

“Through his use of technology, Brent has set himself apart as a team leader in this field,” says Mike Watkins, John Deere customer support manager. “He does research during his off hours to make sure his information is the latest available to complete his tasks as efficiently as possible. Additionally, Brent shares his findings with his peers and supervisors creating a work environment of research-based solutions. He has been able to diagnose difficult problems that stump even the pros,” says Watkins.

“He is very professional at what he does,” says Robert DeLouche, project manager at Traylor Bros. “He is always looking at the equipment and the surroundings so that he can be proactive. He is always teaching other technicians.”

“I’ve known Brent since he was a young man in school and he was an impressive young man,” says Ed Martin, equipment superintendent at Traylor Bros. “He always impressed me as very industrious, very interested in learning, very savvy about computers. It didn’t bother him working late if he had to on a project.”

“Technicians are the people who get us up and running in a hurry and make us all successful,” says Roger Mohr, director of corporate business division at John Deere Construction and Forestry. “They keep our machines and our customers going and are deserving of special recognition. The Technician of the Year initiative is our way of doing that,” he says.

“The job of an equipment technician is not only physically and intellectually demanding, it also tests a person’s character,” Mohr says. “Technicians deal with a lot of negative pressure. Nobody calls them until something breaks and then they’re thrown into a pressure cooker environment. The Technician of the Year Program is a way to recognize people who don’t get a lot of recognition. These individuals deserve our appreciation for their service to our industry.”

Thad Pirtle knows something about the value of the Technician of the Year award. In 1990 he was the second person to ever receive the award, and has since then gone on to become a vice president and top equipment manager at Traylor Bros. as well as a past chairman of the AEMP board of directors.

“Being tech of the year means a lot to a person,” Pirtle says. “It opens doors to opportunities that are difficult to quantify – opportunities to give back to your trade and your profession and to organizations like AEMP.”

Having steered away from the cushy, college graduate life of cubicles for the rough and tumble of heavy equipment maintenance, does Schroder have any regrets? None at all.

While his peers from college are unfulfilled with entry level jobs that barely tap into their potential, Schroder is at the top of his game, keeping tens of millions of dollars equipment running efficiently on what is perhaps the country’s most important infrastructure project. And while this work sometimes requires 60 or 70 hours a week, Schroder has also managed to start a family. He owns a rental property and is stepping up to a bigger house for his wife and three young sons.

And rare in these days of under-employed college grads, Schroder likes what he’s doing and the company he works for. “They have a strong focus on safety which is another reason I value working with Traylor Bros.,” Schroder says.

“Our position on safety is second to none,” he says. “Everyone has a reason to work safely. Mine is my family. I owe it to them to come home the way I left every day.”