The models range from the 14-metric-ton DX140LC to the 23-metric-ton DX235LCR-5 reduced tail swing machine.  Ranging from 113 to 181 horsepower, the excavators use both a diesel oxidation catalyst and SCR emissions aftertreatment system. The DX140LC-5, DX140LCR-5 and DX180LC-5 have Perkins engines; the two larger DX225LC-5 and DX235LCR-5 models have Doosan engines.

A sight gauge lets operators know the fluid level of the DEF tank; topping off the DEF tank is recommended as part of regular fueling operations. DEF consumption on the machines averages around 5 percent of fuel consumption.

One area of concentration for Doosan engineers in the dash-5 upgrade was the front work group, says Shane Reardon, Doosan’s excavator product specialist. “It’s what really takes the abuse,” he says. To beef up this area, Doosan installed what it calls an ultra hard wear disk in the bucket pin area that will last around 7,000 hours, Reardon says. “Just unbolt six bolts on each side to replace it,” he says. “It doesn’t require reboring, or putting in new bushings. And the tighter things are in this area, the better your breakout force.”

Doosan also put solid cast sections at the end of the stick, the end of the boom, and the pin-on point on the boom cylinder. “We also have internal gussets inside our boom at high stress points,” Reardon adds.

Inside the cab, a 7-inch LCD display shows both machine operating information next to the standard rearview or optional side-view camera. When both cameras are in use, a split screen display allows them to be viewed together.

“When you shut the door it’s very quiet,” says Shane Reardon with Doosan. “Some operators will start the engine, not think it’s running and try to start it again.”

The machine has four work modes and four power modes – power-plus, power, standard and economy, each offering a step down in power, and leading to more fuel economy. “This helps you to tailor the machine to your application,” Reardon says.  The pattern change valve – allowing you to switch between ISO and backhoe–style control patterns – is located in a service door right behind the cab. Auto shut down can be set from 3 to 60 minutes after the machine starts idling.

The cooling group is split instead of stacked, which Reardon says increases the visibility from the cab rearward.  The hydraulic pump, drive motors and swing motors are Doosan built.

The five models include:

All five models have been updated to include improved anti-skid plates for easier engine access, a relocated emergency engine stop, an upgraded alternator and a new front window design.

The excavators come standard with a three-year subscription to Doosan Telematics, which allows customers to monitor machine health and location, and gives Doosan dealers the ability to respond to machine warning messages and alerts. 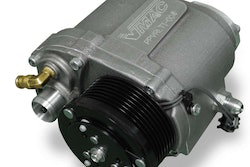 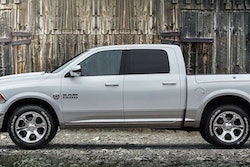 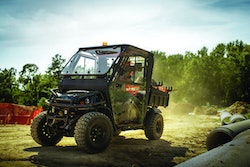 PHOTOS: Check out time-saving tools and equipment you might have missed in our End-of-Winter roundup