A whoosh, like connecting an air hose to a compressor, is the only thing that lets me know I’m in business filling the bed-mounted fuel tank in the 2015 Chevy Silverado bi-fuel CNG 4×4 I’m driving.

Moments after turning on the pump, the digital readout on the dispenser rapidly clicks off the gallons as fuel under 3,600 psi streams into the tank.

In what seems to be less than a minute, the readout stops at 11.7 GGE (Gasoline Gallon Equivalent).

I tap the CNG switch at the far end of the row of auxiliary switches along the bottom of the Silverado’s center console and up pops the CNG fuel gauge’s bar graph on the digital dash display; it’s blue all the way to the full mark.

The toggle switch’s indicator light blinks for a few seconds then remains on, indicating the truck’s bi-fuel system has switched over to CNG and, in doing so, switches to a separate engine control module (ECM).

Using two separate ECMs was the only way the GM engineers could optimize the driving characteristics of the two very different fuels.

The CNG module has different engine and transmission calibrations than the module on the gasoline side: Injector durations and flow, engine timing, transmission shift points and a host of other calibrations have been changed to meet stringent EPA emissions goals.

Driving the 2500HD on CNG is no different than when regular 89-octane E-10 flows through the 6.0L’s injectors: The engine is smooth, and the exhaust quiet.

The GM 6.0L V8 makes a respectable 360 horsepower on gasoline but drops 59 of those horses when CNG runs through it. GM CNG engineer Mike Jones says the drop in power is a result of tuning the engine so it meets EPA requirements.

Although the BTU of CNG is closer to that of diesel than E-10 unleaded, Jones says the current engine technology in the way the gaseous fuel is delivered doesn’t take full advantage of that energy.

“When we first began experimenting with CNG engines, they made better horsepower and fuel economy than they did running on gas,” notes Jones, reflecting back several years. “But we have to meet certain emissions criteria and that has an adverse affect on both power and mpg with our current technology.”

Consequently, when the CNG switch is activated, the Silverado takes a 20-percent hit in both horsepower and fuel economy as the trade-off for running an environmentally clean fuel.

I saw 15.1 mpg running the truck on E-10 gasoline on the 108-mile round-trip stretch of relatively flat I-10 I use for testing fuel economy between Gulfport, Mississippi, and Pascagoula, Mississippi. The run is at a steady 70 mph.

Switching over to CNG, the fuel bar and the percentage readout above it showed 45 percent left in the tank at the end of the same round-trip test. That’s the equivalent of 11.6 mpg.

At that rate, the range on the 17GGE CNG tank should be almost 200 miles. But that’s not how CNG works.

That’s because CNG is under tremendous pressure (3,000 to 3,600 psi), and the fuel tank needs to stay at that pressure for the fuel system to work.

As there’s no internal fuel pump, like in a gas tank, when the CNG internal pressure drops below a certain pressure threshold, the system shuts down.

And that range can vary depending on how warm (or cold) it is outside, which affects the pressure inside the fuel tank. When the CNG ECM shuts the system down, the onboard computers truck automatically switches back to gasoline.

The changeover happens seamlessly, and the only visual indicators being the light on the CNG switch blinks, and the familiar gasoline fuel gauge reappears on the dash.

As for the Silverado 2500HD Crew Cab, LT is a comfortable package. The steering and overall handling are excellent, and the loaded ride is stable.

I noticed a little rear suspension kick unloaded, exaggerated when the LT tires are inflated to their 80-psi max-load pressure rating. Drop pressures down to 50 psi, and the ride is much nicer.

The new truck has the same body as the new model 1500s in that the doors are once again inset into the sides instead of wrapping up into the roof where they generated a lot of wind turbulence.

Driving the 2015 HD at interstate speeds has occupants in a quiet, comfortable cab where conversations and audio quality are not being impacted by road noise.

The truck also has excellent brakes, and even rolling on work truck LT tires, it was one of the best stopping pickups I’ve tested, netting a 60 to 0 mph distance of 140 feet.

As for interior highlights, the base LT-trim Silverado 2500HD should never get a complaint. The cloth seats are comfortable, storage space is abundant with a full-width storage tray under the split-60/40 rear bench seat and there’re enough creature comfort amenities to make any workday in the cab pleasant.

With heated power front seats, GM’s MyLink navigation/audio system and the other upgrades that came in the test truck, it was easy to stay comfortable mile after mile while conducting business over the hands-free Bluetooth link.

Is the CNG bi-fuel Silverado HD worth it?

The answer to that lies solely on one’s ROI expectations: If CNG is readily available, the GGE price is low enough to offset the loss in fuel economy, and you can afford to put in your own fueling station, then, yes, the cost of the $9,500 CNG package would be a good fleet decision.

But if you are small (1 to 5 vehicle) fleet owner who has to buy CNG from a retail outlet, then it’s probably not a good option at this time. 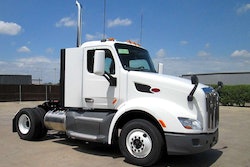 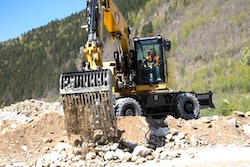