It takes a lot to keep a big fleet running, even more so under enemy fire and on two continents.

But Master Sgt. James C. Thomas III has proven himself adept at all these challenges and was named as the 2014 Technician of the Year by the Association of Equipment Management Professionals. Thomas received the award today at the AEMP’s Technician of the Year luncheon, held in conjunction with the association’s annual conference in Las Vegas.

It has been quite a year for the Air Force veteran.

In the first six months of 2013 Thomas was responsible for sustaining 970 vehicles and German Air Force assets at Holloman Air Force Base, New Mexico. This on and off-road equipment was used in construction and tactical operations over two states and  52,000 square miles.

During that time Thomas’s detailed knowledge of the equipment and quick thinking helped save the life of a lost hiker in the White Sands Missile Range area. A remotely piloted Predator drone had been sent in a search-and-rescue mission to find the injured hiker, but when the specialized refueling vehicle broke down on it’s way to the Predator, it looked like the hiker, by then suffering from dehydration, might not survive.

Thomas realized he didn’t have time to drive out into the desert and inspect the refueling vehicle himself and decided instead to walk the operators through a series of diagnostic steps over the phone.  The fueling crew and Thomas were able to identify the problem (a dislodged fuel sensor), fix it and refuel in time for the Predator to get airborne again and find the hiker.

In May, Holloman AFB was faced with a critical tire shortage due to manufacturer recalls. Rather than use pressure tactics or find a new supplier, Thomas quarantined the affected vehicles and worked around mission parameters to establish a priority list with the existing vendor. By partnering with his tire vendor and finessing the problem, Thomas coordinated 133 replacements in only nine days in a remote area and prevented any interruptions to aviation training and coalition military research missions.

In the second half of the year, June through December, Thomas was deployed to

Kandahar Air Field, Afghanistan, where he was the premier technician and leader of an elite 17-man armored vehicle repair hub for NATO quick reaction forces. By pre-stocking key parts and working tirelessly to expedite repairs, his team was able to maintain a 91-percent in-commission rate, which is almost unheard of in harsh combat conditions.

During his Air Force career, Thomas has completed four deployments including multiple tours of Iraq and Afghanistan. These included challenging missions such as 10 long-distance replenishment convoys up to 13 days each that covered 10,390 miles of some of the most dangerous roads in the world. For these efforts, Thomas earned the Army Commendation and Achievement Medals and Army Mechanic Badge—quite a feat for an Air Force guy.

The vehicles he maintained were also able to avoid breakdowns “outside the wire,” thanks to his strict pre-convoy vehicle preparations. The convoys under his care were safer and more effective thanks to Thomas’s and his crew’s ability to perform hasty recoveries and contingency repairs during enemy attacks on coalition forces.

To keep the soldiers in his shop up to date on the latest technology and improve safety and readiness, Thomas lobbied for and was given permission to bring in the first hybrid vehicle technology and training course given on a stateside Air Force base. The course enabled him and 17 of his technicians to earn certification in this complex field.

Using what he learned in the hybrid course, Thomas developed a first responder training curriculum for emergency personnel on base and helped them procure and maintain the equipment needed to extract people from hybrid vehicles after an accident.

Thomas was instrumental in installing and maintaining 625 Fuelmaster automotive information and management modules at Holloman AFB, which eliminated fuel misuse, inadvertent diesel-gasoline fill ups and saved the base at least $9,000 in tax and fuel system repairs annually.

On the fuel savings front he also initiated an idle-time policy for base fleet vehicles, going so far as to program idle limitations directly into the vehicles’ on-board electronic control systems. This is expected to save the base $18,000 annually.

Put in charge of inspecting 32 MRAP vehicles ($17 million in assets) to be returned to the United States for repairs, Thomas technical knowledge and field experience enabled him to designate most as repairable in-country and save the Department of Defense more than $200,000 in transport charges. He repaired many of them himself.

In 2007 Thomas was charged with leading a multi-service repair team in some of the most remote areas of Afghanistan. Embedded in a Provincial Reconstruction Team, Thomas fixed numerous vehicle problems with only rudimentary tools and used his welding skills to help repair Afghan community infrastructure.

When faced with the a series of failures on dump truck bed weld joints in 2011, Thomas used his research skills and root cause analysis to get to the bottom of the problem. After identifying the cause, Thomas developed a solution–buttressing the forward bed joints. Repairs to 70 of these trucks world-wide averted several military construction project stoppages, which could have incurred more than $3-million in construction delays.

Editor’s Note: The AEMP Technician of the Year program is open to companies and fleets of all sizes, public and private. You do not need to be a member to apply. For more information visit: www.aemp.org/people/technician-of-the-year. 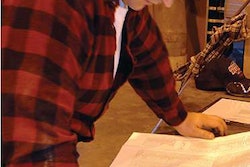 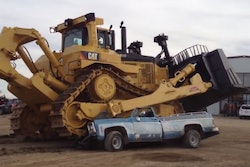 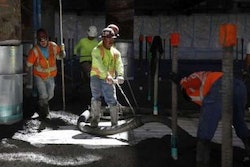