Everything you need to know about Tier 4 Final

January 1, 2014, is a bellwether day for off-road diesel engines. On that fast approaching date, the majority of diesel engines sold in the United States, Japan and most of Europe will have to meet the most strict exhaust emissions standards yet.

To meet those standards – called Tier 4 Final in this country – manufacturers will outfit these engines with a variety of new exhaust aftertreatment components. The ramp up to this point has been gradual, with the Tier 3 standards phased in between 2006 and 2008, Tier 4 Interim from 2008 to 2012 and now Tier 4 Final.

You won’t have to deal with the full gamut of Tier 4 Final technology until you buy your next new piece of equipment or new engine. But eventually almost everybody will have some Tier 4 Final machines in their fleet. And many of you have at least some Tier 3 or Tier 4 Interim machines in your fleet now. There are even some engines out currently that meet Tier 4 Final requirements.

The reduction in emissions from diesel engines as a result of this technology has been nothing short of astounding. But it is mandated by the EPA, and it doesn’t come cheap. By some estimates, the new engines have boosted machine prices by as much as 10 percent.

Here’s a short review to help you sort out all the details:

The EPA regulations aimed to drastically reduce two primary exhaust pollutants. Particulate matter, or PM, is mostly unburned hydrocarbons like soot that previously shot out the exhaust stack unimpeded, and nitrates of oxygen or NOx, which is a primary ingredient of smog. 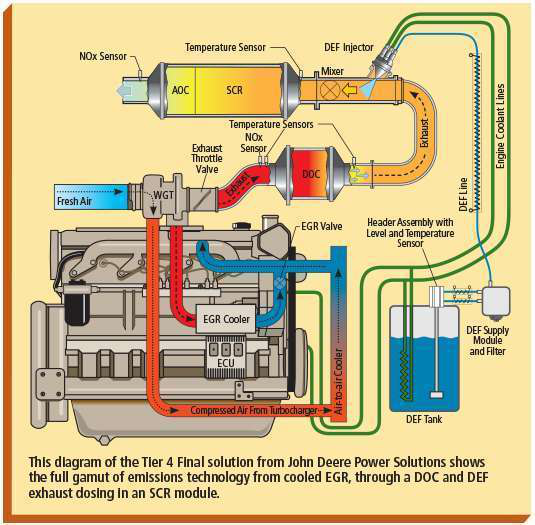 With the advent of Tier 3 regulations, most manufacturers added an exhaust gas recirculation – or EGR – circuit to their engines. EGR takes a portion of the exhaust gas and recirculates it with fresh intake air. The exhaust air reduces the amount of oxygen in the combustion chamber. When this oxygen-reduced air ignites on the compression stroke, the resulting exhaust contains less NOx.

The EGR circuit is a simple fix. There is an EGR valve, controlled by the engine’s electronic control module, but otherwise it’s simple plumbing. Recirculating hot exhaust gas back into the engine increases temperatures. So most EGR engines run the recirculated exhaust gas through a cooler. Some manufacturers also increased their engines’ overall cooling system sizes as well.

To bring down PM to acceptable levels in high horsepower Tier 3 engines most manufacturers resorted to using a diesel particulate filter, or DPF. These large, honeycombed, ceramic filters are coated with precious metal catalysts that trap PM in the exhaust stream.

In normal operating conditions, the exhaust temps are hot enough to incinerate most of the trapped PM in a DOC. But idling, cold starts and light load factors can accelerate PM accumulation. When a DPF becomes full enough to affect backpressure, the engine’s ECM injects a stream of diesel fuel into the DPF, raising temperatures and burning off the accumulated PM. This is called regeneration.

On some systems regeneration happens automatically without the operator needing to do anything. On others, a warning light comes on to let the operator know that he needs to activate the regeneration system. Regeneration temporarily raises the exhaust temperatures, making it important not to engage in a regeneration cycle when you’re around combustible material.

Eventually ash, which won’t burn off, collects in the DPF, requiring it to be cleaned or exchanged. The EPA requires manufacturers to size DPFs on engines 175 horsepower and up to last at least 4,500 hours between cleanings. For engines below 175 horsepower, the required maintenance interval was set at 3,000 hours.

Most heavy equipment manufacturers today offer guaranteed intervals on DPF replacement or cleaning. To prevent excessive ash buildup and possibly voiding your warranty, use a low-ash oil. These are typically designated with an American Petroleum Institute’s CJ-4 label.

Be mindful that DPFs are so good at scrubbing soot from your exhaust that they can take away the visible smoke that used to tell you of impending engine problems. DPFs can also be compromised by over extended drain intervals, faulty fuel injectors or cooling system problems so it’s important to keep the entire engine well tuned and in top shape.

Another way manufacturers are reducing exhaust pollutants is the used of diesel oxidation catalysts. These are filters with a catalytic coating on the filter media. Much like the catalytic converter in a car, the catalyst on a DOC chemically changes carbon monoxide, hydrocarbons, diesel particulates and other pollutants to carbon dioxide and water.

In some engines a DOC is used in conjunction with a DPF. In many lower horsepower engines a DOC is sufficient to meet Tier 4 Final regulations without the need for a DPF. These are often touted as “maintenance free” since most stand-alone DOCs do not need cleaning or replacement and are warranted for the life of an engine.

Tier 4 Final regulations called for a drastic cut in NOx levels. In most engines this was more than EGR alone could handle. The solution was to install a new exhaust aftertreatment system called selective catalytic reduction, or SCR.

In an SCR system, the exhaust passes through a DPF or DPF/DOC combination first and is then doused with a mist of water and urea (a common chemical used in commercial fertilizers) in a catalytic chamber. The urea/water solution is commonly referred to as diesel exhaust fluid, or DEF. The exhaust and DEF in the presence of the catalyst turns the NOx into mostly water and nitrogen.

Since 2010, on-road trucks have used SCR to reduce NOx, so the technology is well proven. It does add another layer of complexity, but there are several advantages. For one, the use of SCR means the engine can meet emissions standards with a less aggressive use of EGR – so these engines run cooler.

The disadvantages of SCR are that you have to keep DEF in stock and refuel the DEF tanks on your equipment. If you run out of DEF, the engines are programmed to derate, eventually to the point where you can no longer operate. Running out of DEF is just as disruptive to your operations as running out of diesel.

DEF consumption ranges from 3 to 6 percent of your diesel fuel consumption. But since DEF is priced at or lower than diesel fuel and since it actually helps improve fuel economy, most view the pricing issue as a wash.

Ultra low sulfur diesel was introduced into the marketplace in 2009 and 2010. The sulfur levels were reduced because the catalysts used in DOCs and SCR could not handle the higher levels of sulfur.

As an equipment owner or manager, you don’t have to worry about mis-fueling your machines, at least in the United States and Canada. Today ULSD is the only type of diesel you can buy. But the fact that the newer engines can only burn this specific type of diesel may affect the resale value of these machines in the future.

Most auction companies say up to half of the machines they sell wind up going overseas, many to Latin America. In these countries, and most of the rest of the developing world, ULSD is not yet available. So some are predicting a glut of Tier 4 Interim and Final machines in the market in the future, which could depress prices for emissions-compliant used equipment.

Most manufacturers are working on a “de-tiering” solution, a modification that would allow these machines to operate using the higher sulfur fuel. But this process is still in the early stages and the details of how this will be accomplished differ between manufacturers.

If you’re a fleet manager with a big fleet and a regular turnover schedule, talk to your OEM or equipment dealer about their de-tiering solutions before determining the equipment’s residual value.

As the technology of diesel engines has progressed from Tier 3 to Tier 4 Final other aspects of the engines have been tweaked as well. To provide better fuel combustion and throttle response manufacturers have fine tuned the fuel-air mixtures with a variety of turbocharger designs such as twin turbochargers (a large and a small one) and variable geometry turbochargers. Fuel systems have largely gone to a high pressure, common rail design with pressures as high as 30,000 psi or more. And electronic engine control modules have allowed for ultra-high speed, ultra-precise fuel injection sequences.

The bottom line is that new diesel engines are cleaner than ever before, and in many cases more fuel efficient, too. But along with this comes the need to properly price these more expensive engines and any additional maintenance into your equipment owning and operating costs and to make sure any new maintenance protocols are in order to avoid surprises and maximize uptime. EW