The “Big” in Bertha’s name isn’t there for the catchiness.

It’s there because it’s apt. With a 57-foot diameter and a length of a football field, Big Bertha is the world’s largest tunnel-boring machine. She’s quite hefty too. Bertha is assembled from 41 parts, the largest of which weighs in at 900 tons.

And she recently received a celebrity’s welcome in Seattle where Bertha will begin digging the Washington State Route 99 tunnel beneath downtown Seattle this summer.

The new tunnel will replace the SR 99 Alaskan Way Viaduct that was opened 60 years ago this week, according to the Washington State Department of Transportation. Replacing the viaduct will cost a total of $3.1 billion. Digging the tunnel alone will cost $2 billion.

The $80 million Bertha traveled 5,000 miles from Osaka, Japan where she was built by Hitachi Zosen. The owner of the tunnel-boring machine is Seattle Tunnel Partners, the contractor chose by WSDOT for the tunnel project.

Nice place you’ve got here. I was expecting rain.

Can’t see land yet, but even from here it smells delicious. Trying to convince the captain to stop for a quick bite, but he’s all business.

Bertha’s a lumbering giant too. Once she’s started digging, Bertha will tunnel beneath Seattle heading north at a pace of 3 inches per minute. She’ll be digging a 1.7-mile tunnel which WSDOT expects to be completed in 16 months.

The WSDOT says the tunnel is expected to open to traffic in late 2015. The department will also be pointing a webcam at Bertha’s progress pretty soon. Click here to check and see if it’s live yet. 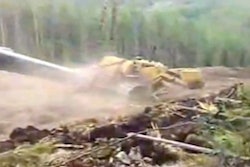 Runaway pipelayer heads down a mountain 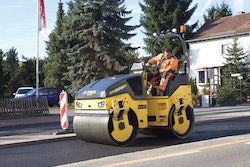 What it takes to pave a parking lot, Part 2: Rollers 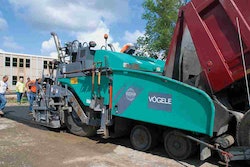 What it takes to pave a parking lot, Part 1: The Pavers