I’m here in Munich at series of press conferences being referred to as “pre-Bauma” in a windy and cold city. The event is allowing equipment manufacturers to preview what they’ll be display and talking about at the big show in a couple of months.

Come April some truly imaginative products, I mean really wonderful stuff, will walk away from the huge Bauma show here in Munich as winners of one of the event’s prestigious Innovation Awards.

I only have a list right now but details should be coming up. Standouts include (in the Design category) Kaiser’s Walking Mobile Excavator, which looks like a relative of the Mars Curiosity rover, a Liebherr compact loader and Wacker Neuson’s 100 demolition breaker.

During a press conference, Caterpillar said it will put on a really big show come April.  The centerpiece will be the hybrid  excavator 336EH (pictured above and also worth noting that it’s one of Equipment World’s 2012 Innovations Winners.)  Our readers will know something about the new machine from the work done by editorial director Marcia Gruver Doyle after she was present at its unveiling at CAT US HQ in Peoria Ill.

But at Bauma CAT will take off all the wraps, focusing on what the machine can actually do rather than just its technology. All the specs will be available along with what it can do and how it works in the field.

Cat will also introduce the new 988K large wheel loader at Bauma. It’s a complete upgrade of the H series with a Tier 4 Final engine.

Cat’s upgraded mini-excavators will also be on display, but it’s at the other end of the scale that Cat will turns heads — the 6020B hydraulic mining shovel will be the company’s biggest piece of equipment on display. At the moment, the machine is still being built here in Germany. I couldn’t confirm if it will be available in the North American market.

Liebherr said today it will present its new modular design 150 EC-B flat-top crane, designed to offer customers a wide range of machine configuration to give them the maximum efficiency an cost control on a variety of jobs.

The company will also show the 357HC-L luffing jib crane, the successor to the old tried and trusted 355 HC-L. The new crane’s jib reaches its out-of-operation position at over 70 degrees and Liebherr says it can rotate freely in the tightest spaces, a crucial factor in high crane-density working environments.

This is a preview of a show and there’s some blurry edges, so I haven’t been able to determine yet if these cranes will be available in North America. Same with the new LTR 1220 telescopic crawler crane which will also be at bauma in April.

Then there’s the one I’d personally like to drive; the new nine-axle all-terrain-crane, the LTM 1750-9.1. Picture that machine rolling through your town — and its telescopic boom can remain attached during transportation. 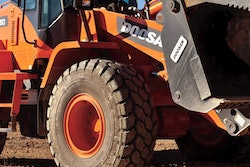 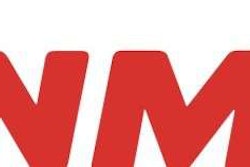 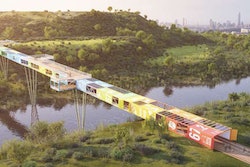 Bridge in Israel to be constructed out of shipping containers