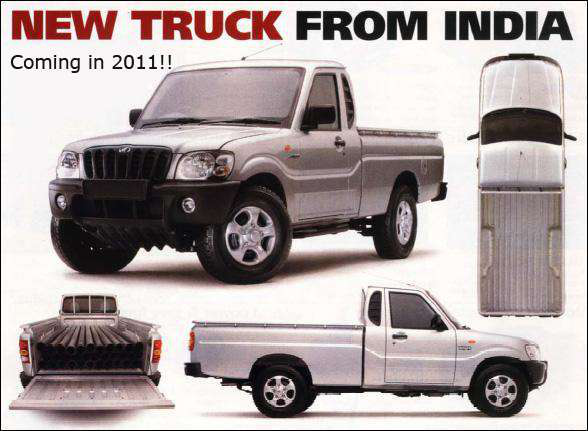 It was bound to happen. Indian automaker Mahindra & Mahindra has been promising would-be U.S. auto dealers a small, affordable diesel-powered truck as far back as 2004. But after eight years and no trucks, the dealers have ganged up to sue the parent company.

The mass tort suit was filed in U.S. District Court in Atlanta on Monday and alleges the company used false representation costing the dealers $60 million for fees, marketing programs and showroom construction.

“Mahindra told the dealers that its light trucks and SUVs were ready for delivery to the U.S. market,” said MIchael Diaz, managing partner of Miami-based Dias Reus & Targ, who leads the plaintiff’s legal team. “However Mahindra intentionally delayed certification of its vehicles after obtaining the dealership fees and trade secrets and began pursuing other partners in the U.S. and elsewhere in clear violation of their committments.”

The would-be Mahindra truck generated lots of interest among U.S. truck enthusiasts who (at least in web forums, blogs and magazines) have complained about the lack of a half-ton diesel truck from Detroit. But marketing people from the Big Three grow quiet, stare at the floor and mumble whenever the subject comes up, perhaps not wanting to dampen enthusiasm, but certainly aware that putting a diesel in a 1/2 ton pickup would add $4,000 to $6,000 to the price tag. And they probably have figured out that a price increase like that would be a deal killer for all but a tiny minority of truck buyers.

Yet, if Mahindra had followed through with it’s plans Detroit or perhaps Toyota or Nissan may have been forced to follow suit. But for now, it looks like the dream is dead. If you want a 1/2 ton diesel, you’re going to have to do it yourself.