AGCO has announced that the Fendt 900 Gen7 Series and 1000 Gen3 Series tractors will include the new FendtONE operator station. New models of these premium high-horsepower tractors will debut at the 2021 Farm Progress Show from Aug. 31 to Sept. 2, 2021, in Decatur, Ill.

The latest innovation for Fendt tractors is the advanced FendtONE operator station, which the company says provides producers with a streamlined and highly efficient work environment. FendtONE features up to three large, easy-to-read display screens, as well as a new multifunctional joystick and customizable control buttons built into the completely redesigned right-hand armrest, putting all tractor functions within arm’s reach. Both new series also come standard with five years of Fendt Connect telematics that allows an operator or their dealer to remotely monitor important machine data, Fendt says..

The Fendt 1000 Gen3 Series includes four models ranging in power from 396 HP to 517 HP. These high-performance tractors are workhorses, designed for year-round work, including heavy tillage, planting, combine chaser work and large-square baling. Track width can be adjusted down to 60 in., for row crop applications.

All models in the 1000 Gen3 Series have received another upgrade, a new tire option. The Trelleborg VF “very high flexion” 480/95R54 tires are the largest tires offered on a row crop tractor and are designed with stronger, reinforced sidewalls.

The Fendt VarioGrip tire inflation and deflation system allows the operator to deflate the tire pressure from the cab with the push of a button. This Fendt-first innovation also allows automatic tire inflation before traveling down the road to improve handling and fuel efficiency. The Fendt 1000 Gen3 Series has a top road speed of 31 mph, the company adds.

Complementing the larger 1000 Gen3 Series, the Fendt 900 Gen7 Series tractors include five models ranging from 296 to 415 HP. They are designed to specifically meet the needs of producers in North America and deliver unprecedented fuel efficiency, uptime and agronomic benefits, the company says. The 900 Gen7 Series has a wide range of implement connections at the front and rear to operate a varied combination of front and rear implements. Fendt says users can use the versatile tractor for a variety of jobs, including pulling a large square baler or planter, or for heavy work around livestock operations like spreading liquid manure and towing silage wagons.

The operating weights of the five Fendt 900 Gen7 tractors range from just under 25,000 lb., up to 42,000 lb. A convenient front mono-block ballasting system, with weights from 1,918 lb., (870 kg) to 5,512 lb., (2500 kg), lets the operator quickly re-ballast the tractor for the job at hand. Compact and agile, the 900 Series tractors have a narrow transaxle combined with pull-in turn action to allow them to maneuver in tight spaces with a shorter, smoother and more precise turn, the company says.

Additionally, Fendt notes a new self-cleaning air filter system for the engine is now an option on both the 900 and 1000 Series tractors. This air filtration system blows compressed air back through the air filter in the opposite direction, helping to keep it dust-free even when the tractor is running. 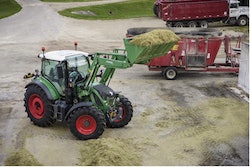 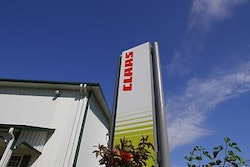