The tremendous gains corn producers have seen from the advancements in corn hybrids has had one lingering side-effect. Robust plants that can withstand some of the worst that mother nature offers can do a number on equipment tires. Couple that with plant populations that increase the tire exposure with every drive in a field and you have a recipe for tire damage that can bring fieldwork to a grinding halt.

It’s not just the single stalk piercing the tire and causing a catastrophic failure. Stubble can also slowly pick at the entire tire, taking small chunks out that over time can cause leaks and tire failure.

Tire manufacturers know this problem all too well. They continue to work with new compounds and tread designs that can minimize damage. “The easiest thing would be to make harder compounds, but that would mean tires that would not be as flexible and would not perform well in all working conditions,” says Scott Sloan, ag product manager, Titan and Goodyear Farm tires.

“In a study that tested hardness, a typical tractor tire is measured on a durometer in the range of 68 to 72. But with a corn stalk the measurement was 90,” Sloan says. “That’s almost the hardness of plastic. That would not work for a tire, so the focus is on how to minimize damage.”

[RELATED: Seven steps to help you get the most out of your ag tires]

A cottage industry has evolved of various add-on equipment that knocks down stubble ahead of the tires. In addition, equipment mounted on combine heads knock down stalks as the crop is being harvested, experts say.

“Producers can also look at developing controlled traffic patterns in the field,” Sloan says. “It is very difficult to eliminate tire stubble damage. But being aware of the problem and taking some small steps ahead of time can help you get more life out of your tires.” 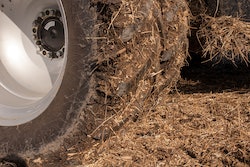 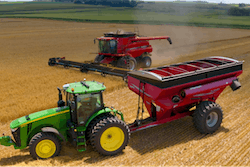