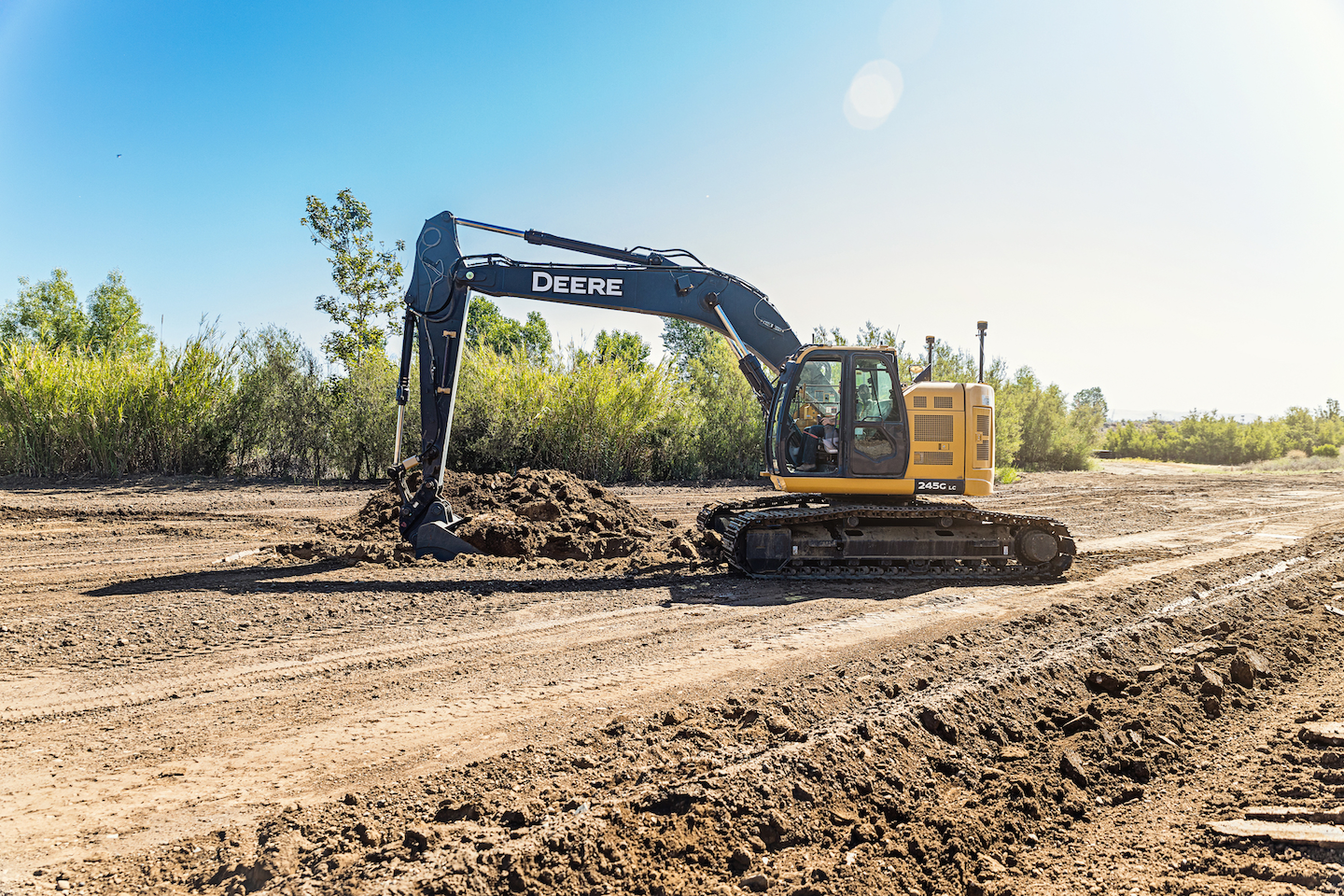 For excavators, a new edition of Topcon’s 3D modular control system, the X-53x automatic, adds hydraulic control for fully automated digging while otherwise using the same components from the original system. The new system, announced at the recent Bauma show in Germany, is designed to be easily upgradeable from the 2D and 3D systems.

“We are using our own IMUs (inertial measurement units) with the system,” says Kris Maas, director of product management machine control. This includes four sensors, one each on the body, boom, stick and bucket. Those combined with a GPS antenna on the back of the machine to give you roll and pitch enables your excavator to dig fully automated to a design loaded into the machine’s control panel.

To calibrate a GPS control system on an excavator requires that you take exceptionally precise measurements of the bucket, stick, boom and position of the machine. Rather than pull a tape measure and typing in the measurements on a screen, on the Topcon’s X-53x the calibration is done wirelessly using a total station and stored in an app on the machine. You can also program the size and geometry of unlimiteddifferent buckets into the system and choose your bucket with a touch on the screen or enter custom bucket values as well.

Another challenge to automating excavators is the complexity of these machines’ movements and hydraulics compared to dozers and graders, which were the first machines to take advantage of GPS automation. Topcon’s solution was to build a self-learning capability into the X-53x.

“Our system looks at the rpms and how the machine responds and how fast and what gets priority in the hydraulics,” says Maas. “It figures out the best balance on the hydraulics settings to get the ideal performance out of the machine. It will keep learning and improving itself through the lifecycle of the system.”

With fully automated GPS excavator control even relatively inexperienced operators can cut trenches, slopes, embankments and complex contours often without the need for a finish dozer or grader to clean up the work.

Topcon also announced an upgrade to its jobsite monitoring system – Sitelink3D 2.0. This pay-as-you-go account-based system replaces the yearlong prepaid subscription model. It includes a remote configuration function in which Topcon personnel can directly access and configure receiver components on connected machines while retaining an active remote session of the 3D-MC machine control software.

The new system also uses Cesium 3D visualization engine.“That gives you a lot of capabilities to look at the current structure but also show what you’ve done on jobsite in 3D,” says Maas. “When you dig a hole, you can see the hole.”

With its as-built capabilities, Sitelink3D 2.0 allows multiple operators on different machines to see what the other operators are doing. So for example, if one roller operator has finished compacting a section of material, the other roller operators see that in real time and won’t repeat the work, possibly over-compacting the material and wasting time and fuel.

Sitelink3D 2.0 also has a Haul Truck app that can be downloaded to Android or iOS phones or tablets. The app provides a real-time, cloud-based haul truck management system including geofenced sites, truck counting, routing and reporting. With our weigh system in Sitelink3D 2.0 we reportthe material being loaded and report that back to the Haul Truck app to give you a record of the material being moved, says Maas.